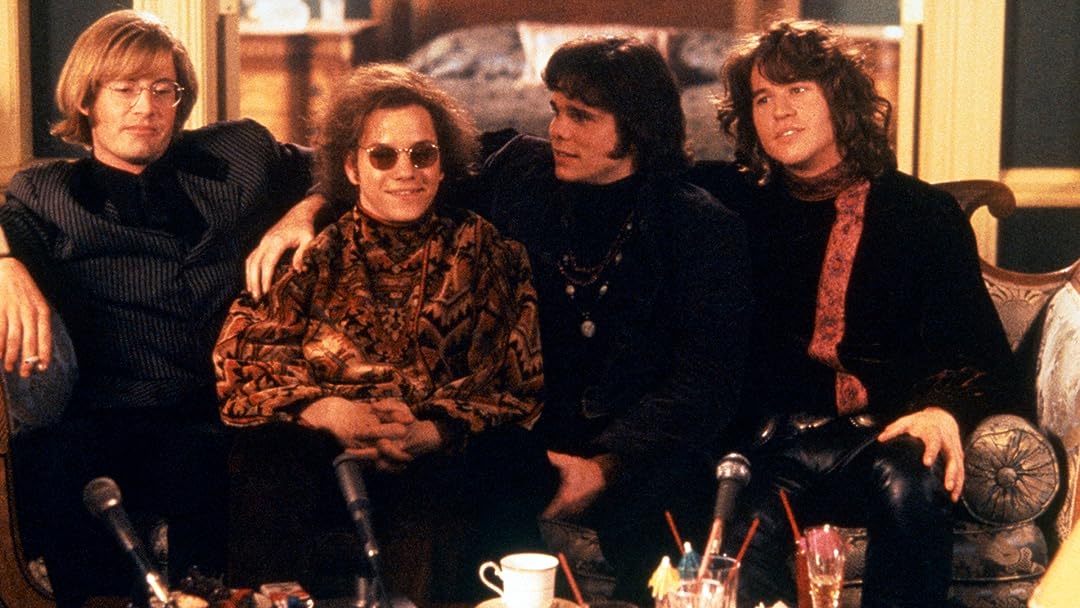 (3,178)
7.22 h 20 min1991X-RayR
Jim Morrison, one of the most sensual figures in the history of rock and roll, explodes on the screen in this electrifying movie about a time called the sixties and a legendary outlaw who rocked America's consciousness - forever.

AlisonReviewed in the United States on January 25, 2019
1.0 out of 5 stars
Character Assasination at Its Worst
Verified purchase
Oliver Stone created a completely 2 dimensional and grossly sensationalized caricature of a very complicated, talented, yet troubled human being here. Based on the book, No One Here Gets Out Alive (Morrison's friends call it, Nothing Here But a Bunch of Lies) Stone paints Jim Morrison as a vapid and vain ditz. Had he explored and portrayed Morrison's acute intelligence, innate introversion vs. his stage persona and the deep despair that fueled Morrison's self-destructiveness, he may have created something meaningful to pass on. Instead, he gave us a testament to his own superficiality as an artist. Had Stone chosen to portray Morrison's pathos through a lens of compassion, he might have left us with a poignant requiem for a brilliant life lost too soon, rather than this pathetic cinematic cartoon. Don't waste your time on this film. If you want to know about the life of Jim Morrison, read Frank Lisciandro's books, Feast of Friends and Friends Gathered Together. These are stories told by people who knew JDM well and loved him.
49 people found this helpful

Christopher C.Reviewed in the United States on November 8, 2019
1.0 out of 5 stars
Stone was a liar...
Verified purchase
Loved the music. But the crap Stone decided to put in the movie to make Jim look bad was shameful. “Jim didn’t light Pam’s closet on fire. He didn’t throw a TV set at me. His student film didn’t have images from ‘Triumph of the Will.’ That was totally made up. And Jim never quit film school. He graduated from UCLA... All you see is Jim as a drunken hedonist. The tragedy is that fame consumed him. But that wasn’t Jim’s message. He was intelligent. He was loving. He was a good man who believed in freedom and in questioning authority... But you’d never know that from seeing this film.” ~ Ray Manzarek
33 people found this helpful

Cedric J. LeeReviewed in the United States on July 30, 2018
4.0 out of 5 stars
YOU MUST VIEW IT AS FAN FICTION!!
Verified purchase
Val Kilmer Is Jim Morrison in Oliver Stones idea of The Doors. That’s the best way to enjoy this. If you understand mirror realities, you can enjoy this. That’s what Oliver Stones movies are: Not biopics, just fan fiction to wet your whistle. The music is of course amazing. Don’t start this movie looking for an accurate discription of people places and events. That just ain’t Oliver Stones thang, if you will. They keep giving this guy money and calling him a biographer. I still don’t know why. Once you get over that feeling of being betrayed, you can enjoy this. Oh, and the hippie vibe, but how did you get here if that bothers you? It is a great movie though.
26 people found this helpful

Jeanine KReviewed in the United States on February 14, 2019
1.0 out of 5 stars
Oliver Stoned
Verified purchase
One day Oliver Stone had an idea - I'll make a movie about Satan possessing the body and mind of Jim Morrison, and call it a bio pic, "The Doors". Morrison was an alcoholic, a shooting star, a child in a man's body who drank himself to death.
Long ago, I read the book NO ONE HERE GETS OUT ALIVE by Danny Sugarman. His account of Jim and the Doors was based on his day to day experience with his employers - The Doors. Morrison was just a messed up dude, a lost soul and an amazing poet. This movie was another Oliver Stoned messterpeice where - fiction is portrayed as reality.
23 people found this helpful

Matthew D'SouzaReviewed in the United States on August 30, 2019
4.0 out of 5 stars
An Insane Acid Trip of a Biopic!
Verified purchase
Oliver Stone takes the drug fueled, poetic heart, and rambling mind of Jim Morrison and brings him to life in his music biopic simply entitled The Doors (1991). It is certainly slow, long, and meandering, but The Doors also captures Jim Morrison’s earnest poetry, his electric presence, captivating frontman persona, passionate moody singer, and crazed recklessness. I love The Doors for their creative spark, impressive technical prowess, poetic lyrics, sincere groundbreaking, and complete originality. The film absolutely holds you in its magnetic grip, gazing into the dilated eyes of a strung out Morrison as he gazes back at you deep into your soul. Stone’s writing implies that Morrison was hurting constantly, hating life, and desiring death, but I think there was also a brilliant artist. Morrison wrote amateur poetry as he clearly wanted so desperately to be a real poet, but his real eternal poetry lies in his visceral lyrics.

The music of The Doors will last forever as a testament to a time of drug indulgence, erratic behavior, free love, and inspiring creativity. The film The Doors manages to construct a fairly believable persona of what Jim Morrison was like as a person thanks to Val Kilmer’s uncanny resemblance, real singing, and hypnotic gravitas. Kilmer transforms himself into a magician of musical bliss, intrigue, mystique, and aimless nihilism. If Morrison really wanted to die, he certainly lived his life with no restraints. He was a man shouting into the ether of the universe begging for attention, validation, and comfort. I wonder if he found any peace ever?

Oliver Stone’s direction recreates America during 1965 through 1971 with a careful eye. The outfits, buildings, music, celebrities, attitudes, drugs, parties, concerts, and speech all feel genuine to the era. You are riveted by the story of The Doors and held in suspense waiting for Jim Morrison to die. I just wish that there were more attention given to the fascinating band members of The Doors, instead of solely focusing on the legendary frontman Jim Morrison.

Stone’s editing choices obviously were intentional to simulate a peyote or an acid trip, which makes The Doors a transcendent film, and an annoying one at times. Just when you understand how broken and destructive Morrison was, you get little of The Doors’ career as a group. The major concerts and infamous incidents are covered, but not more intimate moments between the band. I wanted more of the latter and less of the former for a more coherent story. The drug induced atmosphere is intense and an experience all its own, but Oliver Stone went overboard in his dedication to harnessing The Doors’ psychedelic magic power.

In addition to Val Kilmer’s iconic performance as Jim Morrison, The Doors contains several sublime supporting roles. Meg Ryan captures the flower child, drug addict, free lover Pamela Courson with a mesmerizing presence all her own. Kyle MacLachlan depicts legendary organist Ray Manzarek with an earnest sympathy for his struggle of coping with his friend Morrison unravelling as well as fame and family. Manzarek was the steadfast leader of The Doors as a band and a voice of conscience clearly desperate to save his friend. MacLachlan was inspired casting, much like Kilmer as Morrison.

Furthermore, Frank Whaley is perfect as unique lead guitarist Robby Krieger. His sweet hippie friend to Morrison is touching as he simply desired to make music with his friends. Whaley’s portrayal of Robby Krieger really captures his dour guitar playing and bursts of energy in his dreamy guitar playing. Whaley involves you to demonstrate what a genius Robby Krieger was at his instrument. Krieger captured a blend of blues and Spanish guitar styles alongside Ray Manzarek’s classical organ, John Densmore’s jazz drumming, and Jim Morrison poetic lyrics with his melancholic blues rock singing for a genuinely original sound for The Doors. Kevin Dillon is fierce as Densmore and brings an energy to his portrayal and drumming.

Otherwise, Michael Wincott’s gravelly voice as Paul Rothchild is distinct and even reaches sincere heights as he begs Morrison not to overdose like Janis Joplin. It’s too bad Morrison never listened to Rothschild, Manzarek, Krieger, or Densmore or he might have had a longer life. Michael Madsen plays a drunken actor pal of Morrison’s bent on aiding Morrison’s quest of self-destruction. Kathleen Quinlan is hypnotizing as the alluring Patricia Kennealy, who Jim Morrison had an affair with much to the dismay of Meg Ryan’s increasingly delirious Pam. The Doors just keeps delivers cool cameos left and right from Kelly Hu as Dorothy to Wes Studi as an Indian in the desert. Even Crispin Glover appears as a wide eyed Andy Warhol.

In all, Oliver Stone’s The Doors is not immaculate in its execution or editing, it is ambitious and earnest in its depiction of The Doors. I wish the rest of the band had more screen time, but Val Kilmer is such an all encompassing actor here that you might not even notice. The Doors is a classic biopic despite its flaws.
10 people found this helpful

Ron BakerReviewed in the United States on April 5, 2019
2.0 out of 5 stars
Shallow, disconnected, a total miss
Verified purchase
I love Oliver Stone's films, but this was terrible. This does NOT tell a story. It consists of random snippets of Morrisons life that are confusingly arraiged and make little sense. Everything in this film seems out of order, there is no coherent linear story for the viewer to follow. It is shallow, disconnected, poorly paced, poorly scripted, poorly filmed and the dialogue is inane.

Oliver Stone really dropped the ball on this film. Not recommended.
16 people found this helpful

EdMReviewed in the United States on July 28, 2019
5.0 out of 5 stars
“The Doors”, Great in 4K
Verified purchase
I have an earlier BD and it’s just okay, despite my being a fan of the Doors. However, this new version in 4K is a complete turn-around, it looks and sounds great. There are parts with limited video fidelity as in the film school scenes and certain other portions for a desired look. Still, this has a very nice filmic look, with a substantial boost in video quality. Beyond the video, the audio is a new, high quality experience. I’ve never heard the Doors music sound so good. While the movie has a certain Oliver Stone style that not all agree with, I’m very happy to have this very nice upgrade. It is a flashback, true in essence, to an earlier time.
10 people found this helpful

tkReviewed in the United States on March 7, 2019
3.0 out of 5 stars
Sexy yes, brilliant no
Verified purchase
Acting was great. Kilmar succeeds at what was a hard subject to portray and Ryan absolutely shines. Morrison comes off as exactly what he was. An incredibly charismatic, sexy rock star who is an out of control drug addict, a liar, and whose drug use kills the golden goose for himself and the lives of everyone around him. Interestingly Morrison wasn't even that good looking but wow, was he sexy. As a poet he was no better than half the kids in high school. "Baby light my fire", or "break on through to the other side." I mean seriously not that profound of "poetry" but add the group's music, and Morrison's swagger and sway in those leather pants and you've got a million bucks.
7 people found this helpful
See all reviews
Back to top
Get to Know Us
Make Money with Us
Amazon Payment Products
Let Us Help You
EnglishChoose a language for shopping. United StatesChoose a country/region for shopping.
© 1996-2021, Amazon.com, Inc. or its affiliates