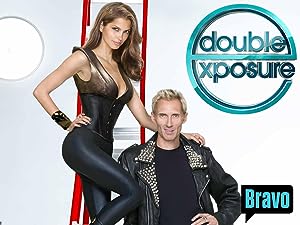 Season 1
(9)
6.12010NR
Go behind the lens of celebrity photography duo Markus Klinko and Indrani in "Double Exposure". Viewers will get an inside look at what it takes to pull together high-glam shoots for icons such as Naomi Campbell, Lady Gaga and Lindsay Lohan... and see how it's never a dull day in the life of this celebrity photography team.

J. ChoeReviewed in the United States on July 21, 2015
4.0 out of 5 stars
Like I said
Verified purchase
So who are these guys? I have no idea. I never heard of them. They're not Mert and Marcus or Inez and Vinoodh. Markus Klinko is not even a photographer. He used to be a harpist. And now he operates some Hasselblad with a special-made grip? I don't know who Indrani is either. Although she seems to be the real photographer here. I feel that she was a former model who knew a lot about photography from being on set a lot. She probably knows enough to fake through it. I feel that these guys have been created specifically for the show. When I do an internet search, I couldn't find anything relevant they did for the fashion/commercial world, outside of this show.

Despite all this, I thought it was a very entertaining show. Sure, it's reality TV. I'm sure a ton of their situations have been artificially produced by the producers. Like I said, these guys might have been created by the show. So they're pretty much actors portraying fashion photographers. But hey, it made for some entertaining TV, especially if you're into the fashion photography world.

I give it 4 stars for the pure entertainment value from a photographer. For accuracy, well, I had to turn off my brain and imagine they were real photographers.

michiganjim48310Reviewed in the United States on January 7, 2021
1.0 out of 5 stars
Not as I remember
Verified purchase
So hard to binge watch the season, it is a constant bickering over and over. Too intense for me.

mimoyReviewed in the United States on August 12, 2013
5.0 out of 5 stars
funny and yet gets you glued on the tv
Verified purchase
this show is so funny and also very sexy at the same time. the guy can be rude to the girl but still, in the end they both love and care about each other and that's what the show is all about. the fights are a sign that they are passionate about their job and each other...
One person found this helpful

MichaelGReviewed in the United States on February 28, 2015
4.0 out of 5 stars
Good show.
Verified purchase
Good show...too bad it didn't have another season...probably because clients did not want to see the drama going on on set. Otherwise it was entertaining enough.
One person found this helpful

Heather KlepingerReviewed in the United States on June 12, 2014
5.0 out of 5 stars
This show is great
Verified purchase
These two may fight but it leads to pure entertainment and enjoyment. They know how to get the job done and make good viewing.
One person found this helpful

Joseph VReviewed in the United States on June 24, 2012
5.0 out of 5 stars
Hot MESS!
Verified purchase
huge Lindsay Lohan fan and this episode rocks!!! really shows her true... ummmm let's just say REAL self! a must-see!
One person found this helpful
See all reviews
Back to top
Get to Know Us
Make Money with Us
Amazon Payment Products
Let Us Help You
EnglishChoose a language for shopping. United StatesChoose a country/region for shopping.
© 1996-2022, Amazon.com, Inc. or its affiliates