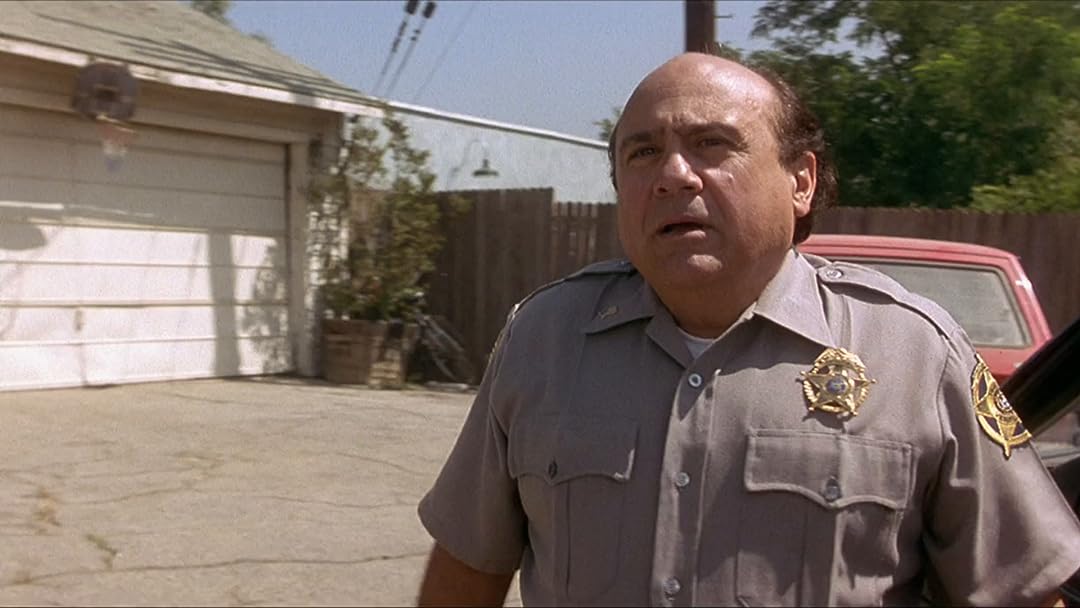 workoutfreakReviewed in the United States on September 28, 2020
5.0 out of 5 stars
Great, Trippy little movie!! Thoroughly enjoyable
Verified purchase
Stellar cast; I kept trying to figure out when it was made and guessed late 80's. I was wrong!
I don't expect a movie to solve my life problems; I want entertainment without too much violence, sex, or too many superfluous special effects. Jamie Lee Curtis was a riot, and Danny DeVito was spectacular. I see other reviewers talking about "character development". What?? What depth of character could you possibly hope for from a two-hour movie? Read a book once in a while if that's what you're hoping to find from the arts, or go to the opera. I want a movie to entertain me and make me feel good. If I want depth, I'll go and see a play, read a book, or, as aforementioned, I'll go to the opera. Just watch it! It's a Great Movie!!
13 people found this helpful

DGGReviewed in the United States on October 3, 2020
5.0 out of 5 stars
Hilarious town full of funny, crazy people...
Verified purchase
Somehow I missed this movie in 2000 but saw it here and decided to watch it. I was not disappointed! This movie had star upon star cast and almost everyone played morons that you couldn't help but laugh at.

The nastiest, meanest woman in town (played by Bette Midler) drives off a cliff in her Yugo into the river and is killed. Now normally this would not be something to laugh about. But you discover (via character flashbacks) that every single person she met had good reason to kill her. The only sane one in town is the sheriff (Danny DeVito) and he suspects foul play. And the mechanic in town confirms the car was sabotaged. Everyone in town begins trying to pin her murder on each other even though they all were really celebrating her death. And in the flashbacks you see why. She was indeed the most evil woman to everybody in town.

The humor is often suttle but sometimes slapstick. But every scene has something funny that either shows why the person had reason to kill her or just how major of idiots these town members were. The poor sheriff has his work cut out for him as it looks like almost anyone could have had motive and means to kill her. Just like each town resident, it's an oddly pleasing feeling you get to her death after seeing all she did to each person.

This is an absolutely funny movie. Now this isn't a movie for kids as it shows some sexual situations without nudity and has a really adult theme of murder running throughout it. It's also got strong language. But for adults, this is a great laughable movie, now perfect for cheering up the pandemic shut-in blues.

MatthewReviewed in the United States on September 28, 2020
5.0 out of 5 stars
This is probably my favorite ensemble movie ever
Verified purchase
There's few few films my family can't stop watching on repeat. Christmas Vacation is often watched in 2 to three sittings every day in December as well as running as just background noise, Big Lebowski, Pulp Fiction, Josie Wales and this. Despite owning a DVD copy of it, my father will morph into a rage demon if it's ever deleted from his DVR recording.
Danny Devito can do no wrong, Neither can Jamie Lee Curtis or William Fichtner. Bette Midler and Neve Cambell are treasure's, Caset Affleck is in the most appropriate role of his life and and more Cameos just keep popping up. Will Farrell's Mortician may be what steels the show if only it weren't for they guy they got to play Jeff. I'm not sure anybody has ever played a character so convincingly stupid since Dumb and Dumber.
But what I like most about it is that It's a great series of character discoveries. Not as deep as anything Agatha Christie has ever written but the actors put so much nuance into their roles that everyone becomes real. And Being set in upstate New York the scenery is obviously gorgeous and Hollywood finally shed some light on a section of America that is often overlooked.
6 people found this helpful

DavidReviewed in the United States on September 16, 2021
5.0 out of 5 stars
Movie Did It For Me!
Verified purchase
I saw this movie after it came out (probably on VHS, I don't remember). Every now and then since all this time has gone by I've had flashbacks of the movie "with the Yugos in it". That and Danny DeVito were the only things I remembered about it.

For some reason I remembered them breaking down worse and worse as the movie progressed. Either some of that was cut out of here or it was my imagination. For those not old enough to remember, those cars were comically horrible while being sold in America. It didn't take long to start seeing them littered on the side of the road everywhere.

While I'm no longer a fan of Bette Midler as she's really shown her true colors lately, she has starred in some great movies and this is definitely one of them. Don't worry, she's killed off early anyway as "Mona", a woman with a horrible personality disorder that everyone hated, so everyone became a suspect.

That's the whole point of the rest of the movie, who did it?

This movie struck the absolute perfect balance of being funny, quirky, kinda cheap, and not very deep, but never annoyingly so of any of these things. The movie was entertaining from start to finish and while I don't expect everyone to hit it off with this movie the way I did, I recommend giving it a shot!

🥇CustomerReviewed in the United States on October 23, 2021
4.0 out of 5 stars
Comedic mystery (if you don’t mind the domestic violence)
Verified purchase
I got the satire behind this movie and I enjoyed it for what it was. It was a slow-paced mystery with a boatload of domestic violence and broken dreams forming the basis of its comedy. If one can deal with that, it was a blast to the past with all the Yugos and great music in the flick. I thought the cast was stellar. I also enjoyed the obvious wigs.

It does feature multiple scenes of domestic violence, rage, and provocation issues. It’s presented in a comedic way and not bloodily graphic, but if you’ve ever had the true misfortune to be around someone in real life with such issues, there is absolutely nothing funny about it. Fear is the word. Though this movie is rated PG-13, I don’t think it’s really suitable for kids or teens. It both skewers and makes light of something that isn’t light at all in real life.

I give it four stars as a free Prime movie (which are usually not the best nor the most recent movies). It wasn’t something I’d have wanted to pay money for.

VinceReviewed in the United States on October 17, 2021
5.0 out of 5 stars
Another reviewer called this a "Great, trippy little movie"...
Verified purchase
...and it is! Tremendous cast and fantastic acting that should be studied by those wanting to be in the business. This is especially true of little things, like the way a character smokes a cigarette or fumbles with their fingernails for a moment during a pensive pause while questioning someone. In short, the characters are real and that's because these were exactly the right actors for their respective roles.
Something I found particularly amusing is that the Yugo is the vehicle of choice for almost every character, if they're not driving a Dodge Omni (which the police drive - both marked and unmarked, lol).
Sure, there's an odd Toyota pickup and a Chevy in there somewhere, but I've never seen so many Yugos in one place that were all drivable.
This "trippy little movie" is permeated by dark humor, endearing quirkiness, authentic characters, and Yugos galore. What's not to like?
Just watch it :-)

The cast in this movie was dynamite. DeVito and Midler reunited from the priceless "Ruthless People". And when they killed her off in the opening scene, you just knew she'd be prominently featured in plenty of flashback scenes, which see was, playing a hilariously vicious, attacking schrew.

DeVito played the straight man oddly enough, and was probably the best actor in the film.

The story centers on the assumption by many in the town, that Midler's (Mona's) death was no accident. She was well-hated by most, and for good reason. Was her death simply an accident as first thought? Or was it a homicide? And if so, who did it?

3.5 STARS
One person found this helpful

Angie EllisonReviewed in the United States on August 5, 2017
5.0 out of 5 stars
Seeing Bette in a role like this; hilarious
Verified purchase
As a writer, I find this script amusing, intelligible and fascinating. The dark and dry humor fits my humor level to a "T" and I was enamored with the character cast. Seeing Bette in a role like this; hilarious. The story line is refreshing and unique, the plot of the movie keeps you guessing. Some may call it "boring", I am guessing they do not read much, nor do they have vivid, active imaginations. If you enjoy a deep story with dark humor to twist it up, this is the movie for you :D
10 people found this helpful
See all reviews
Back to top
Get to Know Us
Make Money with Us
Amazon Payment Products
Let Us Help You
EnglishChoose a language for shopping. United StatesChoose a country/region for shopping.
© 1996-2021, Amazon.com, Inc. or its affiliates