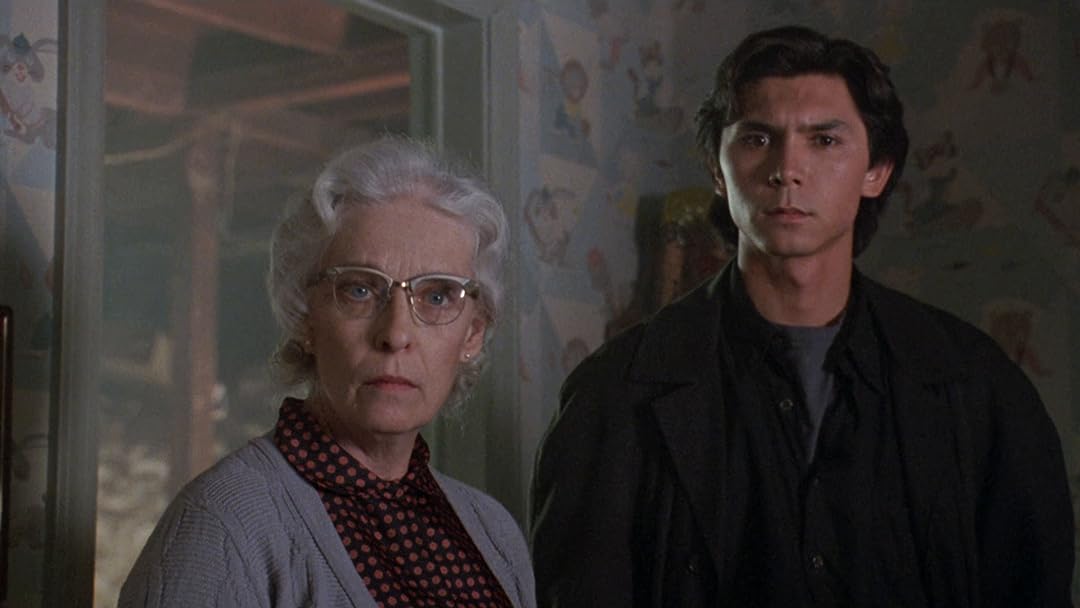 (406)
1 h 38 min1990R
A Los Angeles homicide detective becomes entangled in a horrifying game of murder and suspense involving the spirit of an executed killer. A beautiful psychic comes to his aid and together they grapple to solve the case.

Included with ScreenPix on Amazon for $2.99/month after trial

Watch with ScreenPix
Start your 7-day free trial
Add to
Watchlist
By ordering or viewing, you agree to our Terms. Sold by Amazon.com Services LLC.
Write review

Kyle HachReviewed in the United States on April 14, 2019
5.0 out of 5 stars
Satan has granted one of his disciples with The First Power, in high definition...
Verified purchase
This movie has always been so good, I'm glad it's getting the love it deserves.
Lou Diamond Phillips, Jeff Kober and Tracy Griffith are all awesome in this.
It's definitely a creepy movie and still translates amazingly well.
Not only are there some scary, amazingly effective scenes, there are also some impressive stunts, all done practically.
Something you don't see too much of in today's cinema.
Then the whole thing is topped off with an equally creepy, off-kilter score by the legend Stewart Copeland!

The picture is definitely improved from all previous releases.
I'm so used to seeing this on VHS and cable television so this blu-ray viewing was really special.
Both the picture and audio are great.

We also get special features:
A 32 minute interview with the iconic Lou Diamond Phillips, where he shares some interesting stories from the making of this movie, as well as a few others.
There's also a 17 minute interview with actor Jeff Kober, where he shares some amazing insights and the details behind his approached to researching and shaping his character.
And lastly, the original theatrical trailer.

Blu-Ray comes with a reversible sleeve, with new cover art on one side and the original theatrical poster on the other.
This release is quality, I thought it was a Shout Factory release until I popped the disc in.
Apparently it's a team-up with Kino Lorber and Scorpion Releasing.
Great job on this!
As always, great pricing from Amazon too.

Ben30Reviewed in the United States on November 26, 2015
5.0 out of 5 stars
ALL NEW INTERVIEWS FOR THE FIRST POWER COURTESY OF KINO LORBER
Verified purchase
a Classic Action thriller from 1989 with Lou Diamond Phillips
Lou Phillips is Detective Logan who goes after serial killer Patrick channing played by Jeff kober
Jeff kober got his inspiration to play the character from serial killer Richard rameriz
who was on trial during the making of the film in 1989
I remember watching this film on VHS back in the day
looking at it now these days, some scenes are funny and ridiculous especially the possession scenes
where Patrick comes back as an evil spirit and possesses some people to tease Logan
original released on DVD over 15 years ago by MGM with only a theatrical trailer as an extra
this MGM DVD is out of print now
so better to buy this new reissue by Kino lorber who has released the film on both dvd & Blu-ray
with new interviews with Lou Diamond Phillips & Jeff kober
the interview with Lou Phillips is very interesting and detailed goes for 30mins
Lou talks about his involvement with the whole film, doing his own stunt work
and also working with other stunt men in the film, working with Jeff kober & Tracy Griffith
also working with his friend David madden
he also talks about lots of memorable behind the scenes stories etc
there's also interview with Jeff kober similar interview to Lou Diamond Phillips interview
goes for about 20mins
both interviews are on both the dvd & Blu-ray versions so you choose which version to buy
I bought the dvd cause it was cheaper cost than the Blu-ray, amazon had the dvd cheaper price $10
the Blu-ray was close to $18
the new Digital remaster 1:85:1 transfer from Kino lorber does look excellent pretty Good sharp & clear quality
obviously the Blu-ray version would be better cause it's High Definition transfer
but each to their own
5 stars for each format based on new interviews & new picture transfers of the film
5 people found this helpful

Tony's reviewsReviewed in the United States on July 27, 2011
4.0 out of 5 stars
Eerrie and creepy, but effective just the same.
Verified purchase
Lou plays a cop who thinks the pentagram killer's murders are finally over after he's executed, but really, the terror has only just begun. As he scrambles through LA trying to re-capture the Satanic madman, it becomes clear that this killer has...the First Power. If you haven't seen this film, it's definately worth a look, depending on where you stand with religion. No I'm not a Satanist, I'm a Christian, but I didn't take this film to heart. Anyway, this is another good vs. evil movie that may appeal to some. Final note: ignore the negative reviews from so-called expert critics and give it a look, but a friendly warning: certain scenes and images are very creepy and disturbing, plus if you have a weak stomache, I can't recommend it. It's also creepy enough to create some wicked nightmares. You've been warned!
4 people found this helpful

Enver AzizeReviewed in the United States on July 27, 2015
4.0 out of 5 stars
who know's what body this devil worshiper is.
Verified purchase
I'm sorry that I cant say I love it, but it's about the "first power" Starring; Lou Diamond Phillips-The Officer / Tracy Griffith plays a psychic / with the Bad Guy Jeff Kober. Kober go's in deep with devil so to come back from the dead. Which gives Luo Diamond and his partner a hard time to catch him because he can jump into other Body's. Tracy Griffith who's a plays a psychic who has to convince Luo that he is fighting more then a human but a dead man backed by the devil with power's, so Luo seek's her help. Tracy's sister is Melanie Griffith and the Mother of both Tippi Hedren from that film "The Bird's" A Classic
One person found this helpful

Fred AdelmanReviewed in the United States on November 8, 2014
3.0 out of 5 stars
Like Jeff Kober? Here's A Film For you.
Verified purchase
So-so supernatural horror film with a rare starring role for movie bad guy Jeff Kober (SONS OF ANARCHY). A series of serial killings with a supernatural angle are being committed in Los Angeles. The spirit of a mass murderer (Kober) who died in the gas chamber is responsible and the detective who originally caught him (Lou Diamond Phillips) is on the case to stop him. While the film is well-made, it is truly unexceptional, except for a few scenes, but I recommend this just to see Kober in a rare starring role in a film that was released to theaters (most of his other starring films went straight to home video). Nothing spectacular, but watchable.
One person found this helpful

MarleanaReviewed in the United States on March 11, 2021
1.0 out of 5 stars
Received only Region 2 format
Verified purchase
Stated as PAL but is a Region 2. Will not play without a Region 0 / Region Free player.

Will not play in Region 1 dvd/blue ray player or PlayStation.
See all reviews
Back to top
Get to Know Us
Make Money with Us
Amazon Payment Products
Let Us Help You
EnglishChoose a language for shopping. United StatesChoose a country/region for shopping.
© 1996-2022, Amazon.com, Inc. or its affiliates