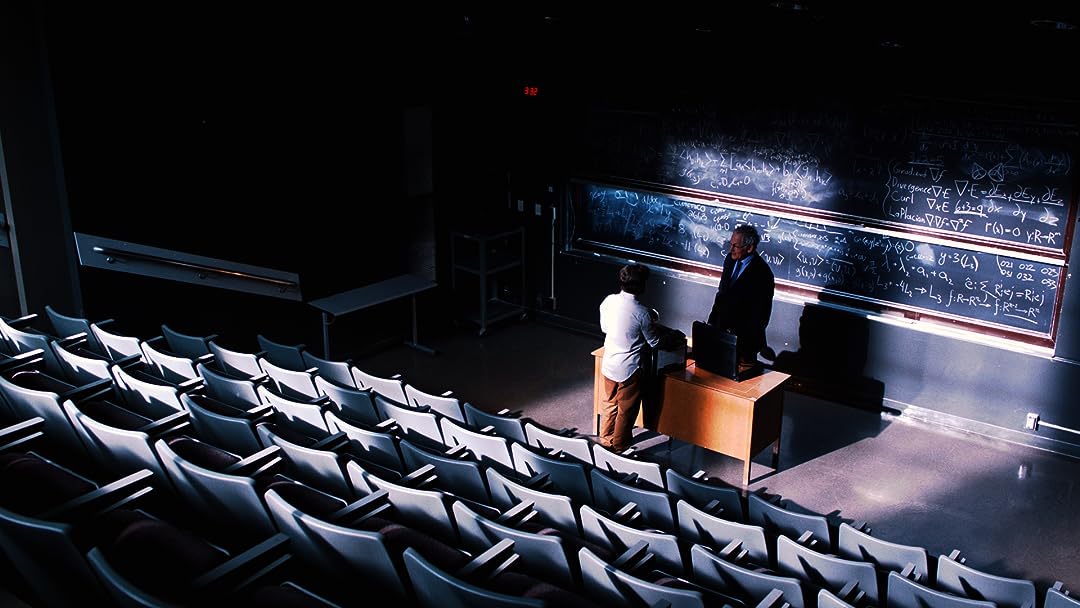 (3,793)
6.11 h 32 min201416+
After the disappearance of a young scientist on a business trip, his son and wife struggle to cope, only to make a bizarre discovery years later - one that may bring him home.

Kindle mReviewed in the United States on August 22, 2021
4.0 out of 5 stars
Rare Gem! Time Travel Done Almost Right!
Verified purchase
It's rare to see any books or movies where time travel is actually done even remotely close to correctly. All too often sci-fi just uses time travel as a trope without looking at the science behind why it would be next to impossible. Besides this movie being a good drama piece with quality gleaming from everything about it, it also almost got the science part of it correct. It even delved into ethical ramifications. A great watch and I hope one day this is the standard for others to follow. All that said, my commentary below kind of contains spoilers. Though I try not to. But stop reading here if you don't want to take the chance.

I admit, I'm a bit disappointed and lost that grandpa isn't the one to go back. It'd have made a lot more sense, logically speaking. If there were any problem with the math, for example, the whole endeavor would have been completely lost at that point. A dumb rash move. But ... whatever. The movie survived that. Sometimes people do make bad choices. So I can't entirely complain, even if it does grate.

So I'd have only really changed two things. First, earthquakes aren't nearly enough. Especially while spinning the globe, he should have made the realization that everything in the universe is moving, the Earth included. So nothing is where you think it will be if you travel through time. You end up in some random location in space if you don't account for ALL of the variables. EVERYTHING is moving. A weird thing to have missed stating after having already foreshadowed it with the equation scene early in the movie.

Second, I think it would have been even better had there been a second end scene injected just before the first where grandpa dejectedly waits for days before finally coming to the conclusion that something went wrong. Followed then by the father's actual end scene. Thereby establishing that BOTH timelines are real, and that "changing" the past doesn't "change" the future, it creates two distinct separate paralells. Therefore killing Baby Hitler is great for the new timeline after that, but does nothing to help the people of the original timeline where he lived to grow up. Making a moral quandary of "fixing" events in time. Telling just the success story leaves too much hope for perfection. LOL

But that's just my opinion.

Frankly, I'm almost surprised that the foreshadowing of him playing with a gun didn't take a darker turn to the possibilities, that he ends up accidentally shooting his father in trying to rescue him and thereby become his father's "mugger"/murderer, establishing that time cannot be changed. I'm glad it didn't go that way, but it had me scared for a bit. I wonder how much of that writing was intentional. That the possibility occurred to me certainly added to the drama, that's for sure. I just hope it was so masterfully written by intention.

Weathered SoulReviewed in the United States on October 6, 2021
4.0 out of 5 stars
It's a quiet, introspective look at the paradox of time travel
Verified purchase
There are already lots of reviews with a lot of good and not-so-good commentary. I think that we have gotten away from movies that make us think, and have traded that for lots of action, where there is no time to think. I like this movie because just like in real life I get to think about what is happening as it happens. Pretty good acting. Thoughtful presentation of consequences of behaviour/actions. Open ended ending, which is as it should be. Worth the time to watch if you are the type who likes movies that focus on ideas and people. Not a lot of phony math and physics (we don't have time travel yet). Some inconsistencies that I noted, but put aside in favor of enjoying the presentation.
18 people found this helpful

Glama PussReviewed in the United States on July 31, 2021
3.0 out of 5 stars
Thoroughly enjoyed this one and I wasnt expecting...
Verified purchase
it to be a 'sci-fi' movie at all. Great premise. I love time travel which has been proven by photographs all all over the net, why we cannot time travel to the future except by psychic means still baffles me. I adore Victor Garber who as usual puts in a great performance as does Gillian Michaels. Haley Joel Osment also, tho my he's gotten chubby lol. Rufus Sewell is so easy on the eyes and also does agreat job. Beautiful ending. Recommend.
13 people found this helpful

KiLovely1Reviewed in the United States on January 2, 2022
5.0 out of 5 stars
Bravo!!! OMG This Movie Is So Good!
Verified purchase
This movie is either 5 stars or 1, there is no in between. You either love it or you don't! So much respect to Haley Joel Osment and Gillian Anderson for their incredible Oscar worthy performance. I am so incredibly touched by this film. I love Rufus Sewell so I completely understand the need to go back in time to save him! He's so handsome and charming, who would dare let that accent stay lost in time? lol I love Victor Garber, he always does his roles justice. I could really feel Gillian's character Marika's depression. I felt so bad for her. I was a bit annoyed how long it took for Erol to be persuaded by his Grandfather Sal to pursue this, and also how his girlfriend resented him instead of supporting his effort. I thought that was selfish, but it took her tragic life event for her to go a long with Erol's decision. I would have trusted that they would have ended up together because they already were friends when he was a boy, but I loved Erol's safeguard to ensure their fate would be protected, so sweet! I could not believe how far Erol had to go to convince his father to choose his family. This movie was so creative, I can't believe I never heard of this and I am so late with watching this.
8 people found this helpful

Some Useless GeekReviewed in the United States on November 15, 2021
5.0 out of 5 stars
A clear-eyed pursuit of what really matters. Well done.
Verified purchase
Osment carries a near-perfect depiction of obsession, loss, and realization. This piece is not about the technology nor mathematics nor any of the other weenieisms in which Sci-Fi (pronounced, sif-fee) enthusiasts are interested. It is all about decisions and determining what is actually meaningful and what we may perceive to be so, and the purposeful choice between those elements.

The supporting cast is top drawer. Everybody in this thing portrays their character with grace and subtly worthy of a high dollar box office smash, which this was not. We even get a t-shirt view of Anderson's nips. (What every 14 year old boy so desperately wants.)

Dix88Reviewed in the United States on January 25, 2016
5.0 out of 5 stars
PERFECT FILM
Verified purchase
I absolutely loved The Time Machine (book & movie) as a kid. My father was a sci-fi nut & took us kids to every movie (sci-fi or not) that came along during the 1950s/60s. Dad had a telescope that we used frequently, also a microscope. He was a geologist who helped mapped Antarctica. But he also suffered horrible PTSD (we called them "rage fits"). I often wondered what might have happened had he not served in WWII where he saw his BF's head blown off by a kamakazi pilot/gunner.
So this film hit me in so many ways. I grew up around scientists/explorers--people like my father who risked their lives (in war & also mapping Antarctica in the early 1960s, living in igloos--Dad has a glacier & a mountain peak in Antarctica named after him (Elder glacier/peak) due to the fact that he nearly died on an icy promontory during a blizzard while there.
Altho' I went another route, teaching English Lit', doing art & writing poetry (many published in literary journals), I have kept my love for science and also hoped that someone would figure out how to travel in time.
There is very little violence in this film. Thank Heavens--no car chases, no shoot-outs. But it is deeply compelling & exciting. I felt utter thrills in watching the particle scientists work on their theory, trying to make it into reality. So many science fiction ideas have come true, so anything is possible.
Without giving spoilers, I will say that Gillian Anderson ripped out my soul with her performance. I've always loved Rufus Sewell and he is wonderful in this film, too.
John Paul Ruttan is perfect as the young Erol. Victor Garber is compelling as the obsessed grandfather (of Erol). Haley Joel Osmet is fantastic as the adult Erol. Susanna Fournier is touching as Grace. In fact, all the actors are brilliant.
The music by Andrew Lockington is perfect throughout.
The cinematography by Tico Poulakakis is utterly elegant. Richie Mehta, director, is a genius.
Watch this film! You will love it.
16 people found this helpful

Paul WrightReviewed in the United States on December 3, 2021
4.0 out of 5 stars
Excellent intellectual exploration of a singular, focused obsession...
Verified purchase
... and the collateral human consequences. This isn't really a time travel movie that needs to be nit-picked on scientific accuracy. If you ever thought your life would be better if something in the past turned out different, then this movie is for you. For some, you'll need to simply ignore the physics details and suspend any disbelief in time travel to get the point of this movie. Excellent dialog, surprising plot twists and credible acting performances by all.
2 people found this helpful

Ron BlachmanReviewed in the United States on November 1, 2021
2.0 out of 5 stars
Cosmology is not a David Copperfield Illusion - the absurdity of this is too obvious
Verified purchase
In H.G. Welles' day our modern understanding of theoretical cosmology did not exist. Time travel was a magic trick and did not have to be consistent with scientific theory. Today, however we have a well elucidated body of theory so any work of fiction has to stay within the basic constraints of it. This is just rubbish as far as that goes. It is worth adding here that cosmology is not really close to quantum physics so the dialog is even sillier. Most people today have thought about the paradoxical nature of travel to the past to change the present so the conceit just falls flat.
3 people found this helpful
See all reviews
Back to top
Get to Know Us
Make Money with Us
Amazon Payment Products
Let Us Help You
EnglishChoose a language for shopping. United StatesChoose a country/region for shopping.
© 1996-2022, Amazon.com, Inc. or its affiliates