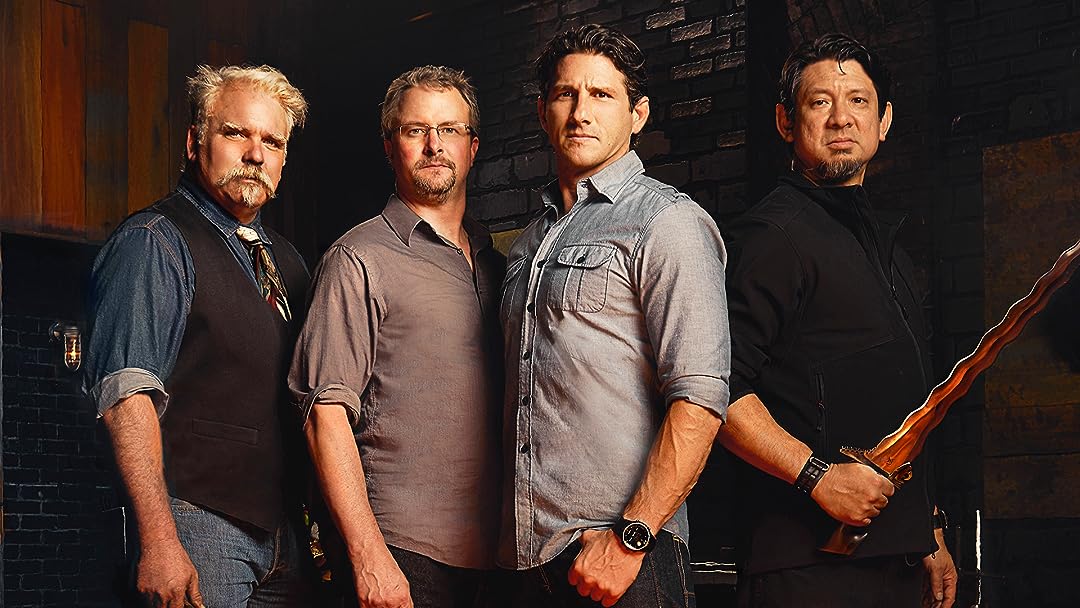 (40)
2015X-RayTV-PG
The best bladed weapon-makers in the country go head-to-head.

Christopher GukeisenReviewed in the United States on January 31, 2019
5.0 out of 5 stars
An interesting take on an age old practice of making things by hand and for a purpose.
Actual craftsman being put to a test to see if their skills match up to others. No fake drama, no over blown personas, just a simple competition.
18 people found this helpful

Amazon CustomerReviewed in the United States on February 7, 2019
5.0 out of 5 stars
Great show
One of the best shows ever. A mans competition making beautiful and deadly things to be tested hard and a winner anointed. That perfect mix of competition, cooperation, educational, and fun.
12 people found this helpful

James TReviewed in the United States on March 15, 2021
4.0 out of 5 stars
Creation
I like to watch people create things. Even if FIF isn't 100% organic, which no TV show ever is, the process is enjoyable.

To the critic, I don't know how it could be more obvious 1. The intent is not perfect ironwork. It never was. Even when the contestant has days for forging, the competition is still self-centered, showcasing what skills the person has and " how much can I accomplish successfully in X amount of time". 2. If the show comes across as a little corny then that is okay. Part of Doug Marcaida's job is to lighten things up with his attitude. The other part is the excitement of properly using a tool for what it is meant for.

JonahReviewed in the United States on February 27, 2020
5.0 out of 5 stars
Best Competition Show
Ive been watching this show for years and love every episode. 4 blacksmiths race the clock to complete the best knife they can, with one being eliminated after each stage. Over the years, the judges come up with new and interesting ways to challenge the smiths. They must harvest steel from junk, complete a certain Damascus pattern, use specific forging techniques or create a specific blade of the judges choice. After the second and third rounds, the finished blades get tested and not all survive the BRUTAL testing.
3 people found this helpful

Matt JacksReviewed in the United States on August 9, 2019
4.0 out of 5 stars
Enjoyed it but...
There isn't enough technical or historic information. Call me a nerd but I like some learning with my entertainment and this is a but "dumb-downed" so far. The last blade (forget the name of it) said in the history intro it was a stabbing blade but when they went to do the test they said was a chopping blade which ruined the chances for one of the blade-makers. Will watch more seasons though!
6 people found this helpful

Amazon CustomerReviewed in the United States on February 22, 2019
1.0 out of 5 stars
Not realistic at all
If you have any kind of ironworking background you will be laughing within the first 10 minutes. 3 hours to forge anything is going to make an inferior product in almost every way...that is just a fact. they should call this show grinder wars, because thats basically all it is
7 people found this helpful

Kindle CustomerReviewed in the United States on August 10, 2021
1.0 out of 5 stars
Very cringeworthy.
Those ridiculous time limits do nothing to showcase the makers skill, all it does it make them rush out some poor quality garbage. Then you get to watch Doug prove why he shouldn't be a judge! Even slicing tomatoes, he can't make a straight cut. Over and over, he tests a weapon and cites it's failing when the issue is that he can't swing straight. The swords don't bend when the edge hits, they bend when the sides hit, so every time he bends a sword, that's entirely on his inability to properly wield them. There are countless actual blade weapon experts out there pointing out how the weapons aren't failing, the judge is. In addition, using a low flash point oil makes for a fiery quenching, which is why no real bladesmiths would ever use it.

Balint D. SzokeReviewed in the United States on March 11, 2021
5.0 out of 5 stars
Fantastic, informative and entertaining show, love how the competitors actually help each other.
Love how it takes the format of Iron Chef, complete with secret ingredients and surprise challenges and applies it to the art of blade-smithing. The challenges are at the edge (no pun intended) of what is possible within the time limit, and the final face off between the last two smiths to create a historical weapon is fantastic. Despite the rigors of the challenges, and the prize money involved the contestants will often help each other, giving the show a rare atmosphere of friendliness and genuine warmth that is lacking on other shows.
Probably the History Channel's best current show.
2 people found this helpful
See all reviews
Back to top
Get to Know Us
Make Money with Us
Amazon Payment Products
Let Us Help You
EnglishChoose a language for shopping. United StatesChoose a country/region for shopping.
© 1996-2022, Amazon.com, Inc. or its affiliates