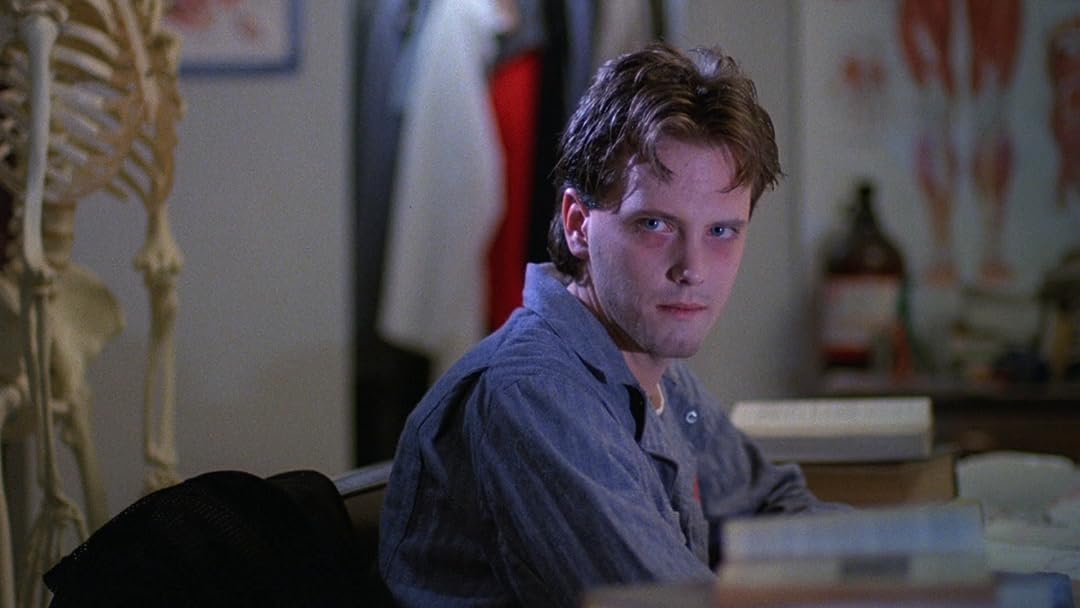 S. RobertsonReviewed in the United States on July 26, 2019
5.0 out of 5 stars
So Bad That It's Good
Verified purchase
Was never allowed to rent this way back in the day, so Amazon recommended it, and I bought it. Bad movie but in a good way, if you're into low to very low budget horror. Pretty campy as expected. Dialogue is cringe-worthy, but I'm assuming that was the point, as most 80's hack and slash productions. I would say this one is on par with Street Trash. Would compare it to Killer Klowns from Outer Space, but that one's actually 100% entertaining. Buy this to urk your parents, bring it to their house and play it for them on their anniversary. Because you're an adult. You can buy stuff now, that they banned you from as a blossoming teen. Take that folks!
9 people found this helpful

joel wingReviewed in the United States on May 15, 2021
3.0 out of 5 stars
Some campy fun
Verified purchase
I saw this movie when it came out and remembered it being some campy fun so I was interested in watching it again to see if it still stood up and it did. The story is about James Lorinz trying to bring his fiancé back to life using body parts from hookers after she’s tragically killed a lawn mower. The opening sets the perfect mood as James Lorinz is an electrician working on a giant brain with one eye in his kitchen while his future mother in law is preparing food for a party outside. That’s just the start of the fun as Lorinz makes a big just of super crack to kill hookers, runs into a muscle bound pimp and more. It’s ridiculous in a good way.
3 people found this helpful

Alex HurtadoReviewed in the United States on December 19, 2019
5.0 out of 5 stars
Top-notch guilty pleasure
Verified purchase
Let's state the obvious: No one who goes to see a movie titled "Frankenhooker" would expect a major drama or an expensive production piece, it's a movie made for fun, and it delivers a nicely wrapped package. Period. This is one of those flicks to see with friends where the laughs and fun are guaranteed; every track runs at its maximun performance: the absurd storyline and the weird characters are mixed with the perfect balance of obscenity and some of the most grotesque and imaginative make-up effects, which are the trademark of this title. The star is Patty Mullen, who is absolutely wonderful, sexy and funny at the main role, and James Lorinz is also at his best as the trashy suburban update of the classic mad doctor. This Synapse DVD edition also comes with a lot of featurettes which are a delight to watch. A must-have for cult cinema and Z-movie lovers.
5 people found this helpful

DocReviewed in the United States on December 30, 2020
2.0 out of 5 stars
Surprisingly slow and plodding film
Verified purchase
I truly wanted to love this film after reading the reviews on Amazon, many of which compared this film to Reanimator. I was surprised, however, at just how slow and plodding this movie felt. Patty Mullen is great as Frankenhooker and really carries the film, but after the initial lawn mower incident, it takes AGES to finally bring Elizabeth back to life...with only 20 minutes of movie left (including 5 minutes of credits)! James Lorenz is simply too weak an actor to hold your attention that long, and was a miscast. Plus, unlike Reanimator, which is a wild ride from start to finish, this film really drags and becomes tedious at times. Yes, the exploding crack scene is funny, but the lame special effects (it is a B-movie after all) lose their “bang” after a few exploding hookers. The “climax” of the film, when the pimp meets his fate, is particularly lame.
Overall, a clever idea for a film, but really only enough material for 30 minutes. Too bad.

This movie rules. You end up wanting to watch it again and again.

It's a fun 1980s movie, before anything like political correctness existed, meaning you have hookers smoking 'Super Crack' which makes them explode. Yes, explode.

You see, they are needed for body parts, as the stars wife was decapitated by a lawn mower.
Of course he is a mad scientist, doing work for 'New Jersey Gas and Electric' to go backwards with the plot.

Only negative is a lackluster performance by Louise Lasser, but this is exploding hookers, not Mary Hartman.
Trust me you wont miss anything.

nordicjackReviewed in the United States on May 22, 2021
3.0 out of 5 stars
Absurd Nerd
Verified purchase
A young neighborhood genius nerd witnesses his girlfriend's demise at a party whereby she demonstrates her boyfriend's latest invention, a remote controlled lawn mower and shredder. The results create the plot for the movie, lovesick medical/electronics scientist swears to recreate his soul mate once he has the parts to complete the task. The entertaining escapades of the estrogen-based Frankenstein provides more humor than horror until the twist at the conclusion.

Bullit1987Reviewed in the United States on March 7, 2021
4.0 out of 5 stars
Love the story
Verified purchase
I really loved this movie when it first came out. Bought it on DVD with bonus material. Unfortunately this Blu-Ray is exactly as the DVD in terms of features. The upgrade in video quality is very good and worth the price. There is no upgrade to the video of the bonus features which is not a big deal since I had already seen it but it's hard to watch with its amateur quality. Still worth the money.

The PhantomReviewed in the United States on June 8, 2015
4.0 out of 5 stars
It's a classic
Verified purchase
It's a classic, and this Blu-ray version looks phenomenal, but just on its own merits it probably would earn three stars. It's a little unevenly paced and slow-starting. Director indicated that he cut out all of the full-frontal nudity and I think that that was a mistake for a movie called "Frankenhooker."

It does have its moments. The (spoiler alert) exploding hookers, and mutant creatures made out of odds-and-ends body parts, are funny in their absurdity. Patty Mullen is amazing in her role as the female lead, especially considering that she had so little acting experience. And there are a few hot women here who show a little skin.

What elevates this to four stars are the aforementioned beautiful transfer, the impressive DVD authoring and the several extras: a few behind-the-scenes featurettes and a director's commentary. (The SFX designer also is on the commentary track, but in name only since director Frank Henenlotter insisted on shouting over him for the duration.)

If you're a fan of these old B movies from the late '80s and early '90s, you really can't go wrong with buying this one.
2 people found this helpful
See all reviews
Back to top
Get to Know Us
Make Money with Us
Amazon Payment Products
Let Us Help You
EnglishChoose a language for shopping. United StatesChoose a country/region for shopping.
© 1996-2021, Amazon.com, Inc. or its affiliates