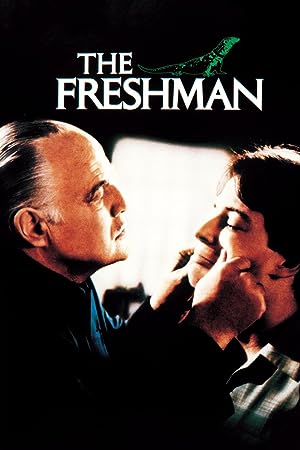 (819)
6.51 h 42 min1990PG
Marlon Brando stars as a Mob boss whose influence on a naive college boy (Matthew Broderick) saves the life of a Komodo dragon.

joel wingReviewed in the United States on April 25, 2020
4.0 out of 5 stars
Matthew Broderick goes to work for The Godfather Vito Corleone or so he thinks
Verified purchase
The Freshman was a cute comedy playing upon Marlon Brando’s role as mafia boss Vito Corleone in Francis Ford Coppola’s The Godfather. It starts with college freshman Clark (Matthew Broderick) arriving in New York City and getting a job with Carmine Sabatini (Brando) who looks and acts just like Vito Corleone. That’s the first thing Clark thinks of when he sees him, and he even watches a scene from the Godfather in his film class. Given that Clark believes that he’s working for a mobster, but it turns out to be something completely different.

Of course, what makes The Freshman was the fact that they got Brando to play the role. Without him the whole thing would not have worked. Broderick does a good job as the gullible college student acting like a fish out of water. What Sabatini is really up to proves hilarious and the twist in the movie.
C

blueiis0112Reviewed in the United States on May 3, 2021
5.0 out of 5 stars
Pretty good story set on both a parody and with original story.
Verified purchase
Younger audiences won't understand what all the gossip about this is unless they watch "The Godfather". The first selling point for the premieriere was watching Brando imitate his own perfornance from a previously major well-known role. Why he and George C. scott did not tell the academy prior to the awards that they would not accept them if awarded is beyond me. But, he repeats mannerisms and partial lines from that movie here. He even shares a scene with the only "Godfather" actor in this movie. At end, as he is leaving the restaurant/club, he is greeted by a man in a white suit who says, "Good night, boss" to him. That was Giovanne Russo, who shared several wedding scenes at the beginning of "The Godfather" as the groom.
One person found this helpful

Z66 AvalancheReviewed in the United States on March 20, 2021
5.0 out of 5 stars
Endangered species on the menu
Verified purchase
Clark Kellogg (Matthew Broderick) is robbed moments after arriving in New York, so when he sees his mugger several days later, he confronts him. The man promises to return his property and get him a job with his uncle, Carmine Sabatini (Marlon Brando), who turns out to be a Mafia boss. As Clark continues his shady work for Carmine, he discovers an elaborate underworld that has caught the attention of the authorities. As things come to a head, not everything is what it seems.

Transcendental ThomistReviewed in the United States on June 11, 2015
4.0 out of 5 stars
Unique Brando "Godfather" spoof meets "Ferris Bueller"
Verified purchase
Unique 1990 screwball comedy about an NYU film school freshman from Vermont (Matthew Broderick, still in his passive "Ferris Bueller" everyman phase) who inadvertently gets mixed up with a Little Italy mobster played by Marlon Brando, spoofing his Don Corleone from "The Godfather." Bruno Kirby is Brando's nephew, Penelope Ann Miller is his daughter, and Frank Whalley is Broderick's roommate in a well-cast Andrew Bergman production. This is high-concept stuff.

Every actor is mugging for the camera in this one. Watch for Maximilian Schell in full goofball mode as a eerily campy German chef named "Larry London" who is in league with the mob and Burt Park ("Miss America") in a great self-parody. Also look for Paul Benedict as a delightfully pompous film professor and BD Wong as a mob flunky among the minor players. As Broderick's crazed environmentalist stepfather, Kenneth Welsh makes an impact as well.

On the other hand, the film hasn't aged well in some ways. By modern standards, the pacing feels a bit slow, being more like a 1980s film than a 1990s production. The plot is also hard to swallow at times, including oddball stuff like Penelope Ann Miller as a Catholic college girl trying to marry Broderick and bring him into "the family" without any real motivation for doing so.

With some long stretches between laughs, the film remains memorable primarily for two things: Brando's sendup of Don Corleone and a Komodo dragon that figures in the plot. The dragon, played by a real lizard, appears in two hysterical sequences which qualify as comedy classics. Seriously, I die laughing at them every time I see it. Brando, on the other hand, relies more on our pop culture memory of "The Godfather" than overt humor for laughs, and his subtle performance isn't incredibly memorable beyond the shock value of watching the original "Godfather" doing a mob spoof.

The DVD itself is OK, including a few features without nothing particularly memorable.

In the end, see this film for the dragon. Without the dragon, it's a pretty average gangster spoof. The dragon makes it.
7 people found this helpful

PhredReviewed in the United States on November 3, 2013
4.0 out of 5 stars
A nicely controlled farce, clever writing and great actors satirizing themselves
Verified purchase
This is a fun family-friendly movie, though not really for the kiddies. This movie features complex plotting with comedic twists and an Academy award-winning performance by a very large lizard. Famous bottom line The Freshman is a fun movie.

A young Matthew Broderick playing Clark Kellogg- Could there be a better name for an 'allll American boy!- arrives in New York where he is to attend film school. Instead he finds himself the victim of a robbery and deep in the hands of Carmine "Jimmy the Toucan" Sabatini (nobody really calls him that). Mr. Sabatini is a brilliant self-parody Marlon Brando, skewering his Godfather performance. The young Kellogg is drawn into a series of misadventures a planted romance with Tina Sabatini -Carmine's only daughter (Penelope Ann Miller) who is accepting of her father's criminal machinations and certainly more worldly wise than the entrapped freshman.

Best supporting actor is a very large lizard in the role of a Komodo dragon. The lizard will have all the best of the physical humor. I leave it to you to determine exactly what it means to train a lizard to act on demand without it attempting to bite anyone's head off.

I count myself among the reviewers who admired Brando's self-parody but try to not miss the otherwise minor role of Larry London played by Maximilian Schnell. With a few deft lines he parodies most of his own career and summons the ghost of Peter Sellers as Dr. Strangelove. For more parody: the alternately film obsessed and craven Paul Benedict as Prof. Author Feebler (who is also a feeble author) converts another small role into another opportunity to poke fun at any of several institutions including Godfather movie intellectuals , film school and university professors

The essence of farce is to keep the madness under control. This movie could've handled a little more madness but the control speaks of excellent direction. As for the punch line not only did I not see it coming but after several viewings I still enjoy the writing that brings you to the climactic moment.

The Freshman makes for a relaxing movie night that will continue to amuse even after you begin to anticipate the jokes.
Bottom Line: A nice popcorn movie and an excellent example of the art of comedic film-making.
9 people found this helpful

Kindle CustomerReviewed in the United States on December 30, 2018
5.0 out of 5 stars
I had forgotten how fun this movie is! Don't miss it.
Verified purchase
This movie is great on it's own, but if you have seen The Godfather, it's a million times better. We watched this with our 12 & 14 year olds and they both really enjoyed it. The story is fun and light, and the actors do a super job. It moves quickly and you won't be bored. Everyone can enjoy this one.
6 people found this helpful

Thalia JohnsonReviewed in the United States on August 27, 2017
4.0 out of 5 stars
The Freshman is a fun romp
Verified purchase
This is a cheerful, funny movie and one where Marlon Brando decided to parody his Godfather role. It all centers around a Komodo Dragon and is also a coming of age film. One of Matthew Broderick's early roles and proof that he was emerging as a good comic actor. Still funny after all these years. I had seen it when it came out and was surprised how well it held up.
2 people found this helpful

paulbramanReviewed in the United States on January 20, 2021
3.0 out of 5 stars
Disappointed
Verified purchase
After all the great reviews I was expecting an exciting evening. Movie was slow 10 minutes spent chasing a lizard in a mall was unbearable. Now if you are a God father fan as myself. Then the movie is tolerable with watching Marlon Brando recreate his God father character to a tee.
I enjoyed watching Marlon Brando who I will give five stars to.
See all reviews
Back to top
Get to Know Us
Make Money with Us
Amazon Payment Products
Let Us Help You
EnglishChoose a language for shopping. United StatesChoose a country/region for shopping.
© 1996-2022, Amazon.com, Inc. or its affiliates