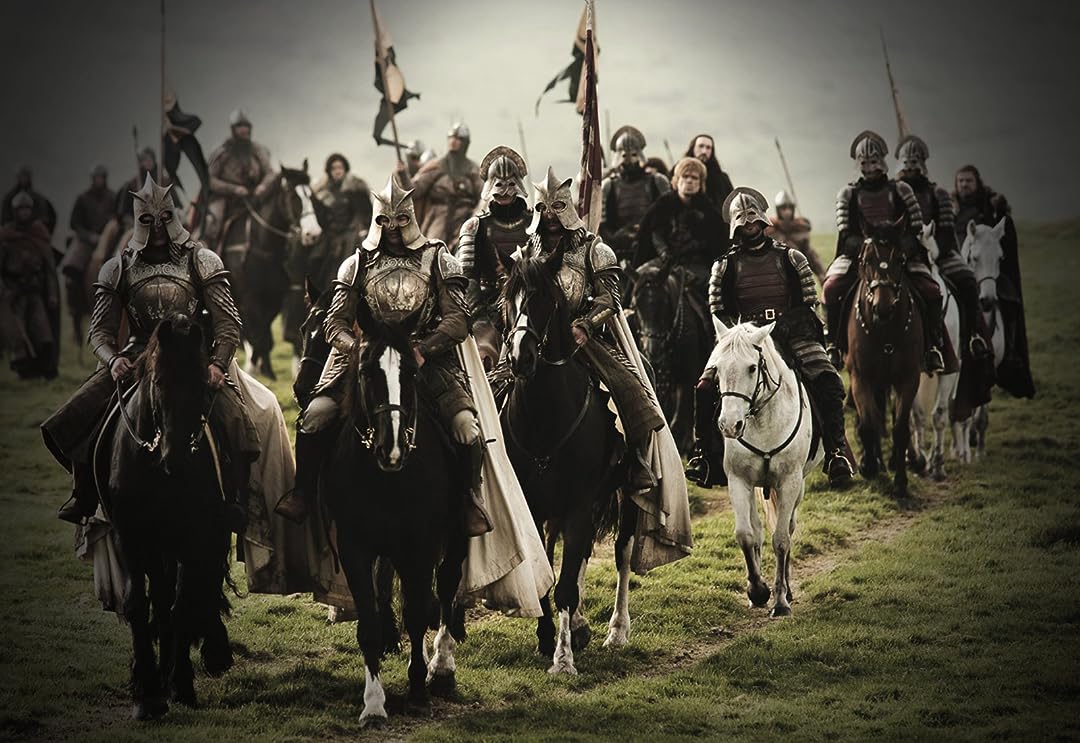 (5,176)
9.22013X-RayTV-14
In Season 3, the Lannisters maintain their hold on King's Landing, though stirrings in the North threaten the balance of power. Meanwhile, Robb Stark faces a calamity; an army of wildlings march for the Wall; and Dany is reunited with her dragons.

WKJReviewed in the United States on April 20, 2016
5.0 out of 5 stars
Enthralling.
Verified purchase
Game of Thrones. Need I say more? No. But I will. I got hooked on this show awhile back. It had already been out for some time and I was able to binge watch (which is always good for me). Let me tell you, I was hooked. I love the intricate characters, the ever changing story and multiple plot lines. You are never bored watching this show.

I will say that if you are an emotional TV viewer, such as myself (I am a cryer and get connected easily with characters) you will find yourself in tears, raging mad and upset throughout the show. The point is, it is a good enough show to draw you in and make you part of the experience.

This show has left me soaring, left me sad, made me angry, made me cry, made me laugh, made my day. It is thought provoking and entertaining all at the same time. Love it.

LCReviewed in the United States on October 8, 2014
5.0 out of 5 stars
it has incredible production values and is fun to watch
Verified purchase
This show is brutal. Season three ends with a shock that will have your jaw drop.

it has incredible production values and is fun to watch. The casting is perfect, and the actors are clearly having a lot of fun putting the show together. The action is fantastic and fast paced.

But it is brutal. Don't get too attached to a character because no one is safe. This is one of the things that makes the show so game changing. it doesn't follow the rules. It breaks them. All of them.

If you have made it to season 3, you are probably already addicted to the show. If you are on the fence about it, then this might not be the show for you. But i love it. I loved the books and I love the way they have kept the story alive with minor deviations.

GrandmaReviewed in the United States on May 10, 2015
5.0 out of 5 stars
Almost as good as Season 1
Verified purchase
Season 3 develops and expands themes and plots. I was disappointed in season 2 as it seemed too complex, with too many short-scripted plots. At least in season 3, some of those plots are more comprehensible. The power of Kalisi is expanding as well as her humanity. I fear for Sansa, who doesn't seem to have the hutzpa to protect herself...hopefully she will "get smart". Jon Snow's part seems to be fading in the early episodes of season 3, wonder what will become of him? Movement and consolidation of kingdoms towards a common enemy seems to be moving in that direction. Still, there is quite a lot of confusion with so many kingdoms. Love the locations, scenery, costumes and cinematography. The programs appear to have cost a lot to set up. In the long run, I think this program (Seasons 1,2,3 will be among my classic collection). I have season 4 but have not watched it yet. May go back to season 2 for clarification before advancing. Still, I remain disappointed in the porno as it does not advance the stories and seems unnecessarily distracting to the progress of themes and plots. (Not in the books as my grand child has told me.)
3 people found this helpful

Empirical experienceReviewed in the United States on March 11, 2014
5.0 out of 5 stars
Starts of kind of slow and "tame" for the series then kicks into gear mid season
Verified purchase
A somewhat slow start to the season also leads one to believe that the nudity and violence have been intentionally cut from the show. Things pick up a few episodes in, as does the nudity,erotica and graphic portrayal of violence. A few scenes late in the season are actually cringe-worthy. However,- overall the nudity, sex and violence are (as usual for the series) integral to flushing out this world, it's inhabitants and the story itself. It seems the screen plays are more nuanced then in past seasons when dealing w/ mature subject matters; in a graphic visual sense. The plot lines twist and turn (to the worst) for many characters, and almost no one is safe from Bad happenings. Really Bad. Three plot lines out of what-ten?....drag on and/or never really come to full fruition , but even those have a final revelation or the genesis of one- which will continue in season four.Eight out of ten episodes are so riveting at some point that you find your self saying" just one more episode before bedtime" etc. Holy mother of spectacle- this show just keeps getting better in most ways. 9 out of 10
2 people found this helpful

FordhouseReviewed in the United States on November 16, 2014
4.0 out of 5 stars
Some truly great acting and scenes marred by others that far from it.
Verified purchase
I love A Song of Ice and Fire, but merely like the show. I know they have limited budgets, and multiple locations across the world, and make up and effects are expensive, but some scenes just are not as grand in scope as they are in the book, and those who are described as hideously disfigured merely have little scars. Also, it is a bit disconcerting how much older most of the characters are in the show. Children who are supposed to be 13 and 14 look like they are 18 or even 20. Gratuitous violence replaces the consequences of the actual violence described in the books. Some aspects of the book, particularly those that deal more directly with magic, were better left out or minimized. Personally I hope we do not see Lady Stoneheart in the show, and as little of her as possible in future books.
3 people found this helpful

Bus-Stop ProductionsReviewed in the United States on October 27, 2017
5.0 out of 5 stars
Peter Dinklage is become the backbone of this series
Verified purchase
I find I'm watching just for Peter Dinklage. I don't think I ever appreciated him as an actor quite so much as I do in this series. Awesome actor! He should be cast for more roles!!

The story is somewhat hard to follow but even a complete novice (like myself) can pick it up in time. It helps to watch the commentary episodes whenever possible because they sometimes give you a better idea about the story progression. I love the series and, like Downton Abbey, each episode just zooms by -- a sign of good storytelling. And also like Downton Abby, the season is too short in episodes and too long until the next one comes along.
3 people found this helpful

louiscReviewed in the United States on April 10, 2014
5.0 out of 5 stars
Great adaptation of the best fantasy books since Tolkein
Verified purchase
I am a big fan of great fantasy writing. Tolkein was the best. Peter Jackson richly deserved the academy awards for best director and best picture that he won for The Return of the King. Since Tolkein, only Robert Jordan and George R.R. Martin approached his creative genius. However they could not complete their stories and just got caught up in logorrhea. Jordan was silenced by death and Martin by a paralyzing case of writer's block However the early books of both writers were amazing and showed great promise. Too bad the Wheel of Time and the Song or Fire and Ice sagas will never be completed by the original geniuses who created them. The HBO adaptation of the first books of the Fire and Ice saga are great. The actors are superb, and the director is doiing a monumental job..

DeannaReviewed in the United States on May 5, 2014
4.0 out of 5 stars
Bloody
Verified purchase
Although I do like it, I am not as huge a fan of this show as others. The acting is good and the sets are just WOW! They must have an absolutely huge budget. But I am not of the strongest constitution when it comes to blood and gore. I just don't enjoy watching impalings, beheadings, heads on stakes, other body parts being chopped off, beatings, etc. So, I end up closing my eyes a lot. I also have never watched a show that has as much nudity as this show. There's so much of it, I don't even really notice it anymore (LOL). The bloodiness factor is the only reason I don't go up to five stars. I haven't read the books, but given the fact that there are so many characters and story lines, for me the story is cohesive and very well told.
See all reviews
Back to top
Get to Know Us
Make Money with Us
Amazon Payment Products
Let Us Help You
EnglishChoose a language for shopping. United StatesChoose a country/region for shopping.
© 1996-2021, Amazon.com, Inc. or its affiliates