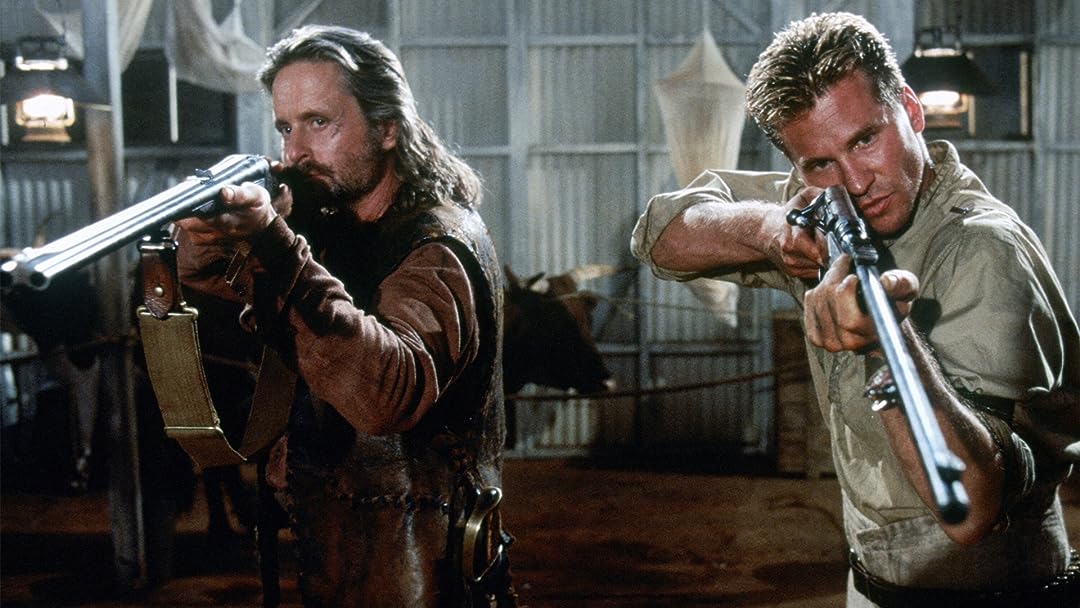 The Ghost and the Darkness

(4,556)
1 h 49 min1996X-RayR
Michael Douglas and Val Kilmer star in this terrific adventure set in 1896 East Africa. There, two lions on a man-eating rampage have shut down the construction of a railway. The beasts hunt together, showing no fear of man or fire.

MovieLoverReviewed in the United States on October 5, 2017
5.0 out of 5 stars
WHAT A MOVIE!
Verified purchase
Contrary to the 1/2 star offered by Robert Ebert (insane), we've watched this film at least 3 distinct times over the years. If we ever visit Chicago, we will go to see 'The Ghost' and 'The Darkness' - the Tsavo Man-Eaters on display in the Field Museum of Natural History.

The Tsavo Man-Eaters were a pair of man-eating Tsavo lions responsible for the deaths of a number of construction workers on the Kenya-Uganda Railway from March through December 1898. The significance of this pair of lions was their unusual behavior, such as the number of men killed and the manner of the attacks.

This movie has so many dimensions that warrant 5 stars that we can't even list them all. A compelling story based on real events. Bring popcorn, or you'll chew your nails off. All 10 of them! Enjoy 5x

LeeReviewed in the United States on January 31, 2016
5.0 out of 5 stars
Great film
Verified purchase
A total of 4 lions who were man eaters dominated this film. They hampered the construction of a bridge, terrorized, and killed almost 100 of the workers. A person cannot say that the lions were hunted, simply the lions hunted and while hunting man they were shot and killed at different times. The cast was superb, scenery superb, and the production was breathtaking. Surprise with Michael Douglas, as he was barely recognizable and gave a stellar performance. Val Kilmer was great in being able to project true fear. A bit brutal and graphic, but necessary to the plot.
36 people found this helpful

Blu ray transfer is decent but has flaws, some scenes have white dots flashing here and there, I wish they had cleaned up the film and corrected those errors. That's why, I gave 4 stars instead of 5. It's still better than the standard DVD edition. There is also no English subtitles. I think there is only German subtitles. Menu is in German so you will need to use your intuition to navigate through the menu options. There are a few extra features about the making of the film and interviews.

I've always liked this film. Somehow, it reminds me of Jaws. There are some parallel similarities in both movies. In Jaws, a shark kept attacking the same town's beach; in G&D, a couple of lions attack the same town. The scenes of fields with tall grass moving with the wind and a glimpse of a lion lurking reminded me of scenes in Jaws where the camera moves through the bottom of the ocean. In both movies, there is a trap devised to lure and capture the predator, in both movies they hire an expert hunter to deal with the situation. Overall, I think this is a very well-made film and one of the best monster movies ever made.
10 people found this helpful

AnnaReviewed in the United States on September 27, 2019
5.0 out of 5 stars
Love this movie, but get your facts straight!!
Verified purchase
I have loved this movie since it was released, and have even been to the Field Museum to see the lions in person. They are old and not mounted very well, but still very impressive. I have issue with the trivia statement that some of the actors have polio vaccine scars on their arms. For the age of the actors, they most likely received oral polio vaccine and would not have any scars. Even the injected polio vaccine does not leave any scars. The scars are either from Small Pox vaccine, (given until 1972), or BCG vaccine, (protects against Tuberculosis), which has been in use since 1921 and still used in some countries today. If you are going to give us trivia to read, which I love by the way, at least make it accurate.
6 people found this helpful

Amazon CustomerReviewed in the United States on May 4, 2019
5.0 out of 5 stars
Fantastic movie!
Verified purchase
I rarely give a 5 star rating but this movie is one of them. Michael Douglas (awesome), Val Kilmer and John Kani do an outstanding acting job in this movie; the entire cast was good. I've seen this movie before and it's one that will never be outdated. Great viewing!!
11 people found this helpful

Talara MastersReviewed in the United States on August 8, 2021
5.0 out of 5 stars
if there is a regret w/this movie it would be for not watching it
Verified purchase
It's been some time since I first saw it & seeing it again had me gripped to the screen the entire time. So much emotions how the camera's captured that energy & the way Val, Michael & the assisting Africans kept you on the edge of your seat as if you are truly watching this all really taking place. Can feel the frustrations, the comradery, the mental weight to achieve getting rid of what taking so many lives. It is truly so uncharacteristic of Lions to just go on the slaughter. I remember the stories of when this happened how many lost their lives & this was brought forth w/the intensity inwhich Val & Michael Douglas played their roles so realistically. A great family movie & it's historical value for the kids to know will stay w/them a life time. These are beautiful majestic animals & these 2 were truly far more than just a couple of male lions palling around. Indeed they are just as mythical in death as they were alive. I would love to see them at Chicago's Museum. 5 Stars that's a no brainer...!!
One person found this helpful

Michael J. ScottReviewed in the United States on June 6, 2017
5.0 out of 5 stars
Outstanding Movie! Blu-Ray, Blu-Ray, Blu-Ray!
Verified purchase
This is an outstanding movie, starring some big personalities, and then there's Mike Douglas, and Val Kilmer. The lions are the scene stealers of this huge motion picture. The African scenics are breathtaking, and the conflicts between labor and management are exciting indeed, with lessons to be learned for the 21st Century. I saw this movie originally in the theater, and can't help but wonder why it hasn't been released to Blu-Ray! Blu-Ray! Blu-Ray! Blu-Ray! I'll be the first of your millions of customers sure to follow.
20 people found this helpful

desert flowerReviewed in the United States on January 6, 2021
1.0 out of 5 stars
the most racist, bigoted movie ever made
Verified purchase
I like Val Kilmer because of the documentary he did on the Salton Sea so I thought I'd give this a chance. This has to be the most disgusting example of colonialism and the white man thinking he is superior that I have ever seen. I can't believe the people representing Africa in this movie agreed to portray the lions as evil while including the storyline that the lions represented a ghost of wisdom against white elite colonialism. I wanted the lion story in the movie to be defended, not the colonizers. Through its role in colonialism, the railway in Africa represents the tearing apart of cultures and destroying ecosystems.
2 people found this helpful
See all reviews
Back to top
Get to Know Us
Make Money with Us
Amazon Payment Products
Let Us Help You
EnglishChoose a language for shopping. United StatesChoose a country/region for shopping.
© 1996-2021, Amazon.com, Inc. or its affiliates