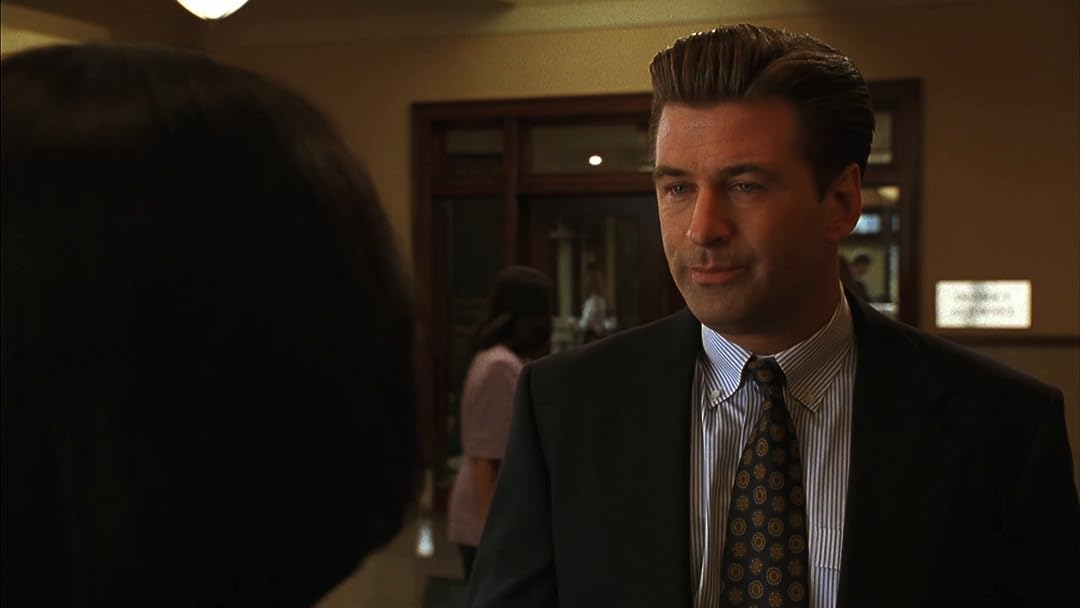 saliloohooReviewed in the United States on July 18, 2022
5.0 out of 5 stars
Fantastic
Verified purchase
I thought it was a very well written movie, it told the story so you were hooked in from the opening credits. 10/10⭐️⭐️⭐️⭐️⭐️⭐️⭐️⭐️⭐️⭐️

SolipsoReviewed in the United States on May 1, 2009
5.0 out of 5 stars
This is NOT a ghost story!
Verified purchase
Years ago I saw the VHS edition of Ghosts of Mississippi on a library shelf. I was in the mood for a good Peter Straub ghost story; so I checked it out. It was not a ghost story, but I was far from disappointed. No ghost story has ever been as good as this story of fact.

Most movies are not worth the time necessary to see them. Nevertheless I have seen hundreds of them, and Ghosts of Mississippi is one of my favorites. A recent viewing of the DVD motivated me to buy Of Long Memory, the book that the movie is based on. Almost finished with the book, I checked amazon, thinking of buying the movie for another viewing. Before buying it, I looked at the reviews. I think my reading of the book has given me something to contribute.

How can the relatively humble and unacclaimed Ghosts of Mississippi possibly be one of my favorite movies? Am I crazy? Yes, of course I am, but besides that you might want to consider some other things: I have an affection for the acting of Alec Baldwin, Whoopi Goldberg, and James Woods; I favor true crime and courtroom dramas; I have always been a firm advocate of racial equality and civil rights; I appreciate a movie with a hearty stand-up-and-cheer ending.

About the acting:
1. Of Long Memory says a good deal about that despicable rat Beckwith, and it is always reminiscent of the portrayal by Woods. That indicates Woods did a good job. And he did get an Oscar nomination.
2. The book doesn't say a whole lot about Myrlie Evers (the victim's wife), and I wouldn't be surprised to learn that Whoopi's portrayal exhibited more energy than was in the real person. Even so, Whoopi was charismatic, lots of fun, and more than satisfactory.
3. Baldwin didn't look at all like the real prosecuting attorney, Bobby DeLaughter. But maybe his acting was accurate. The book says this: "The critics were discouraging [of DeLaughter's efforts to resurrect a twenty-five year old case]. But.... He would explain in his methodical, plodding way, why he felt impelled to go through with it." In other words, Oscars are often won not because of the acting but because of the role. Woods had good material to work with. Baldwin's character was methodical and plodding.

On unusual occasions, fact is more fictional than fiction. In Ghosts of Mississippi, you'll learn that the murder weapon has disappeared over the years. This was the scoped rifle that Beckwith used. It was an important piece of evidence. You'll also learn, if you pay close attention, that DeLaughter's wife, Dixie, was the daughter of a pro-segregationist judge. After starting on the Evers case, DeLaughter remembered that the judge had a souvenir gun from the the historical Civil Rights era. The gun turned out to be the rifle that was missing. (The serial number matched.) That's right. After a quarter of a century had passed, the young prosecuting attorney for the retrial had married the daughter of the judge who had the missing rifle. Fantastically unlikely, but absolutely true. (I think the movie has the rifle being found in an old chest. The book says it was in a closet.)

An interesting point for you Mississippi Burning fans: Two prominent events led to Beckwith's retrial. The immediate stimulus was a court order that released secret Mississippi-government documents suggesting jury tampering in the previous Beckwith trial. But before that, Mississippi Burning itself played a role.

Mississippi whites had bad things to say about Mississippi Burning, and so did Mississippi blacks. The latter felt that the movie didn't give enough credit to blacks for the liberal revolution that occurred in the state. I think the blacks were right, but what the movie did successfully was to remind white Mississippians of their uncivil past. Maybe only a few white Mississippians were ashamed of their past, but the movie encouraged at least some members of the new generation to show the world that Mississippi was, if not yet perfect, cleaner and more civilized. So when the secret files were released, there was enough support for a retrial of Beckwith.

Postscript (May 4, 2009): I got my DVD in the mail, and after watching this movie (again), I wanted to make a final comment, with respect to Mr. Baldwin's acting. I think the climax of the movie is his portrayal of Bobby DeLaughter's concluding argument. It was one of the more eloquent speeches I have ever seen or heard, in or out of a movie, real or fictional. It was so good it may me doubt that it was composed by the screenwriter. Maybe these were Bobby DeLaughter's actual words. I don't know. But it was a very fine speech, and you owe it to yourself to see the movie so you can see the speech.

Tonya CaldwellReviewed in the United States on May 26, 2022
5.0 out of 5 stars
GREAT MOVIE!!!
Verified purchase
Grab a tissue, this will leave you in your feelings!

Rocksolid1989Reviewed in the United States on August 28, 2013
5.0 out of 5 stars
It shows the tyranny of evil still present today !
Verified purchase
It is a most shameful fact of the hearts of men ! (and women) !
The Ghosts of Mississippi shows how even in the year 1989 which happened to be the year after I was honorably discharged from the service (USMC) we still battle racial bigotry! During my tour It was decreed by our president we shall be labeled Dark green or Light green Marines depending the color of our skin (I was ashamed of us as a nation even then)
The act of cowardly hate of shooting a man in the back from a warped perception thinking he was doing God's work, shows us as a people the deceit of evil that is woven into the very fabric of our souls ! Some may say the act was committed by one man. However, every person who lied in testimony, every man on those jury's, every person who knew the truth and did not fight tooth and nail to see justice done, every person who fought against or hindered the prosecutor by the hate shown to him and his family and every one not brought to your knees by the unjust evil done to the Evens family and the changes he was trying to make to better the world we live in and for you who watch this knowing that it took place in 1989 and are watching it today. If you do not weep for the state of our souls and do nothing about the tyranny of evil pledging our nation, then his finger was and is not alone on that trigger ! There is a greater atrosity then the pulling of the trigger, it is knowing what is just and right and standing by and doing nothing to prevent or change it !!!
This movie is based on true events and is well played by Baldwin and Goldberg and the rest of the cast ! It brings to light the suffering and injustice of the Evers family and lengths to which people will go propel hatred and evil.
I served my country for freedom of all men created equal ! The color of my skin is red, for that is the color we all bleed with the open wound of hatred !
My hope in you watching this movie you will see not an issue of race, but one of hatred and evil which destroys all race and creed!
Here are other movies which prick my heart to pray for us as a people; Amazing Grace, Amistad, Rosewood, Schindler's List and The Lena Baker Story all based on true real life facts which has molded us into who we are as a people.
But....we....can...change.... By prayer and showing true love for one another ! Won't you join me....for our children???

sonic andminecraftandmarioReviewed in the United States on December 8, 2021
4.0 out of 5 stars
It’s good
Verified purchase
Worth the purchase and cost

nortonReviewed in the United States on February 21, 2022
5.0 out of 5 stars
brought back memories
Verified purchase
well done

Wolfgang SchwartzenweintraubReviewed in the United States on June 7, 2017
5.0 out of 5 stars
History and Justice presented fairly. Yeah! Medger Evers
Verified purchase
To whom it may concern: Weather you appreciate my misperception of the South or you do not understand that I am not from the South. To give a
You, the reader of this evaluation fair appraisal of this movie a person should have lived in the South. I have not. However cased this movie did an excellent job. I thought the whoppie Goldberg and especially Alex Baldwin were superb in there roles. The supporting cast were aplomb in there performances as a supporting cast of characters. Yes, Dr. Pepper is the king of southern sodas and I must say my short work experience In Texas got me acquainted with that drink which is now my favorite. The one thing that I appreciated was the writer of the movie did not get us the viewer hung up on some insignificant point to make the movie a fraud. James Wood was a disgusting, sickening Byron Delay Beckwith. Everything about the movie seemed realistic and possible. I come away with a better understanding of the bigotry and racial prejudice that is what makes the State of Mississippi what it is and may be forever a frightful place to live free from the hateful attitudes of the Klu Klux Klan and others. This was one of Alex Baldwin's very best efforts as an actor. The movie had a keen Ed Nelson as well. Thank you in advance for your patients with this Damn Yankee. Wolfgang M. Schwartzenweintraub.
2 people found this helpful

TW1Reviewed in the United States on January 27, 2022
5.0 out of 5 stars
Film
Verified purchase
It's repackaged but brand new plus good price
See all reviews
Back to top
Get to Know Us
Make Money with Us
Amazon Payment Products
Let Us Help You
EnglishChoose a language for shopping. United StatesChoose a country/region for shopping.
© 1996-2022, Amazon.com, Inc. or its affiliates