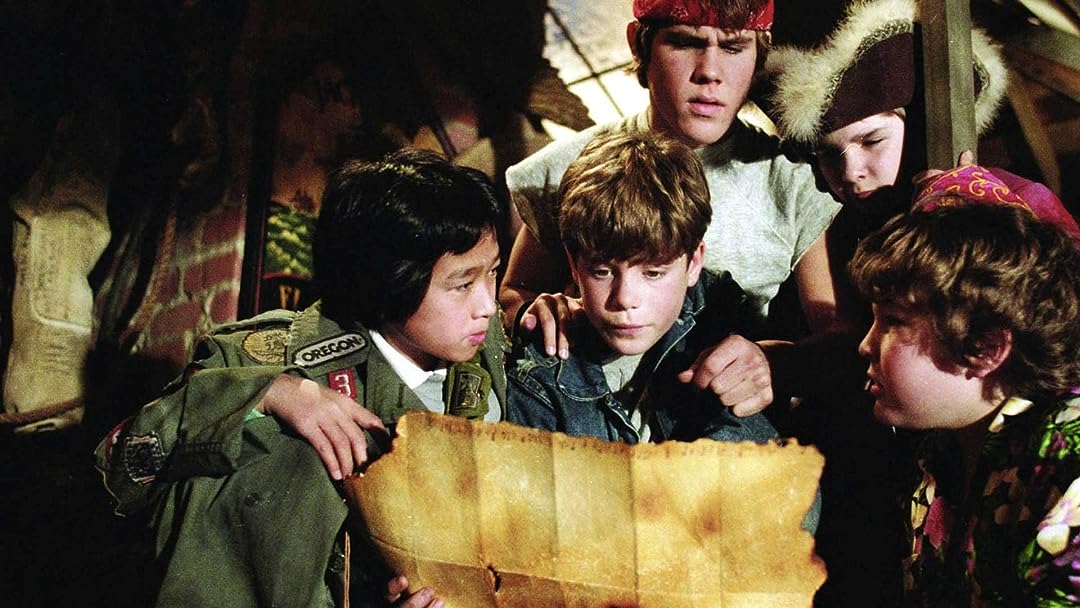 NatReviewed in the United States on September 24, 2018
3.0 out of 5 stars
Parents: Read first...
Verified purchase
Hi. If you're like me, you're a dad who concerns himself with what his children watch. You also want to show them things form your childhood. Don't. At least not until you watch them again. You'll feel differently. I LOVED this movie as a kid, as an adult, I still love it. However, as an adult with young children 10 and under, I watched it again and this time noticed all the cuss words, sexual innuendos and dirty one liners I completely missed all these years. New ears to hear. I encourage you to be cautious when showing to kids blindly. In fact, I'm going to do the same for all my childhood 'kids' movies. Found the same thing with Flight of the Navigator, love that movie, but man does it have more unsuitable content in it than I realized!
219 people found this helpful

KWMReviewed in the United States on March 13, 2015
4.0 out of 5 stars
Missing the Octopus Scene . . . . Grrr!
Verified purchase
Don't get me wrong, I love the version that you get on DVD or even on Prime HOWEVER, it is not the original cut of the movie and that is what I have been searching for. For those that saw it on reel and not on VHS or DVD, the scene that is missing is the octopus scene. The line when they are being interviewed on the beach talks about the attack of the octopus which for some reason or another was removed before going to the VHS and DVD as well as Prime version. I saw it every summer for five summers at Camp Seafarer. I am disappointed that the scene I liked so much has since been removed. Bring back the original cut and I would buy it today!
172 people found this helpful

cohnheadReviewed in the United States on January 21, 2018
5.0 out of 5 stars
The Crowning Achievement of American Cinema
Verified purchase
I am a child of the 80’s and this is by far my all-time favorite film. I can’t explain it, but no other movie gives me the the kind of feelings that this film does. No matter how old you are, watching The Goonies brings you back to that childhood moment when anything was possible. To me this is more than a movie and almost an escape from reality of adult responsibility... and I cherish that for the close to hours this gives me. I also have my kids loving the movie so it will continue for another generation.

I believe that this film should be required viewing for everyone and could easily solve most of the major issues plaguing our society. We are all Goonies, we just need to let that side out more.

ScottReviewed in the United States on March 26, 2021
2.0 out of 5 stars
Missing or deleted scenes
Verified purchase
I'm giving this 2 stars. Not because the movie wasn't good or the quality was bad, but because there were scenes that were cut out, such as the octopus scene, that I grew up with & loved. I had to search for that scene on YouTube to show my boys. They were sad that scene was cut out... So until I'm able to find a 4k copy with the original scenes, it won't be the same movie. If I knew that scene, or others, were cut out of the movie, to be honest, I would have not bought it. That's how much the original matters to me. It's like they are getting cheap with movies these days. It's difficult to find extended cuts, or deleted scene options, or the extras that used to be included on DVD version's or original Blu-ray. They are getting cheap... I'd be willing to pay more for the stuff they've been cutting out. Just a little disappointed is all. Still a great movie, just not what I knew growing up :(
7 people found this helpful

KevinReviewed in the United States on March 9, 2016
5.0 out of 5 stars
Grandparental Warning Required!
Verified purchase
Grandparental Warning Required! If you are a Grandparent you must have this painfully silly kid adventure film in your library for babysitting purposes. How this film attained cult status from around the world is beyond this grandad, but Spielberg always manages to get the goose to lay the golden egg. Last year purportedly 15,000 people came to Astoria, Oregon where the movie was filmed 30 years ago. I live across the Columbia River from Astoria and a friend of mine grew up in the house next door when the movie was filmed. Remember the Rube Goldberg machined the boys put together? My friend has the egg used in the movie to start the contraption! It's actually a machined ball-bearing ground down to an egg and painted white. Bottom line, it's a memory shared first with my babies and now my grandbabies.
73 people found this helpful

S.M.Reviewed in the United States on October 21, 2019
1.0 out of 5 stars
Why? Why do people think this is a good movie??
Verified purchase
I had somehow never watched this movie growing up, so my wife made me watch it.

I have no idea why this is such a classic. It was horrible, had a weak story, and the acting was largely mediocre. Maybe if I'd watched it as a young teenager when it first came out I would have developed some sort of nostalgic attachment, but if you've never seen it before and don't connect it's memory with days of old, I recommend just saving yourself a couple of hours and doing something else with the time.

Leo HottReviewed in the United States on November 16, 2017
5.0 out of 5 stars
A must have classic for Movie Library's!!!!
Verified purchase
" The Goonies " Has grown far past a movie of cult classic status & into the realms of a Pop culture classic & a must have movie for serious movie collectors building a movie library!!! For starters you have a 80's Icon Cyndi Lauper providing the Goonies a theme song ( The Goonies 'R' Good Enough) which if memory serves me right was a Top 50's Billboard Hit Song as well as a M.T.V. classic video! Then you have a group of child actors that acted well enough to endear their characters to audiences for decades to come!!! While this family friendly action, adventure, comedy movie is set in the 1980's it is in no way a dated movie feeling as fresh & fun as when I watched it for the first time while on leave from the service. This movie will never become " Dated" as long as cultural hang ups exist like High School " Clichés" & Greed & attitudes from the rich that loving, struggling " Middle Class" or " working Class " family's are disposable & to be looked down upon !!! And since the gap between the super wealthy & the now almost non existing " Middle Class" is so huge I don't see " The Goonies" becoming a " dated Movie any time soon !!! " The Goonies" was & remains a feel good movie that the whole family can enjoy. " The Goonies" also proves you don't need Billions of dollars spent on explosions & C.G.I. images to make a successful film. It's also fun to see how many of the child actors have grown to be successful adult actors...even if it makes me feel a bit old. Josh Brolin son of James Brolin has grown to become an A-list Hollywood star & Sean Astin seems to be in a Hollywood Block Buster every decade or so...but has been in a list of movies any actor would be proud of!!! When a movie has become so saturated into " Pop Culture" that it is referenced in T.V. shows, Sit Com's & other Movies it has left " Cult Classic" far behind & has moved into the status of " Classic Movies" !!! " The Goonies" has done just that entertaining movie fans for 3 decades & watching my children adding " The Goonies" to their movie library's I am sure my Grandchildren will be adding it to theirs as they start family's of their own!!! The D.V.D. I ordered said it had no extra or bonus features but the widescreen version I received has lots of extra's... even great " Out Take" scene's that help clear up the whole " Scary Octopus." statement that had confused many over the years, l.o.l . I am very pleased with my purchase & the D.V.D. version I got to replace my old V.H.S. !!! Thank you Amazon.com for offering this classic at such a great affordable price!!!!!
9 people found this helpful
See all reviews
Back to top
Get to Know Us
Make Money with Us
Amazon Payment Products
Let Us Help You
EnglishChoose a language for shopping. United StatesChoose a country/region for shopping.
© 1996-2022, Amazon.com, Inc. or its affiliates