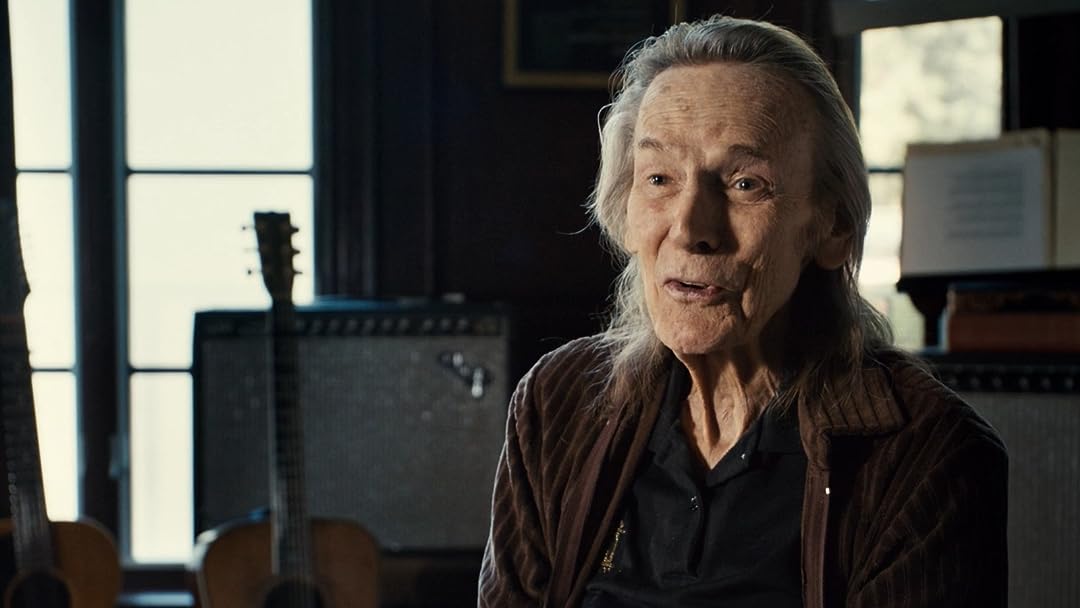 Gordon Lightfoot: If You Could Read My Mind

SteveNYCReviewed in the United States on September 3, 2020
5.0 out of 5 stars
I'm telling you, that you're Beautiful
Verified purchase
I am of "a certain age" and the peak of my pop music listening years was the 60s-70s & 80s.
It could be argued that GORDON LIGHTFOOT peaked in the 1970s.So I like many, was right there with him.
This new documentary is a biographical story of his life and musical career.
If you were ever moved by any of his great songs this movie is highly recommended. Lots of testimonials by other Canadians celebrating what he represents to the nation's culture. So nice to see Ian & Sylvia in particular.
Throughout we see Lightfoot interviewed at age 80, thin and frail looking, interspersed with clips from back then. It is hard for me to watch something like this without contemplation and deep empathy with our universal human experience of beings marking time. The NOW seems eternal when we can slow down and be it, otherwise we are lightening flashes here one moment, but to vanish, only remaining in the mind memories or those moved by our spark and thunder.
The final scene was quite moving for me as the now Lightfoot plays his greatest hit masterpiece If You Could Read My Mind in live performance intercut with him live/then singing it 35 or so years ago when he was a dashing Errol Flynn handsome troubadour with guitar.
He probably would be on the road again now if not for COVID that is cutting off the end too soon for the old while isolating and encasing the beginning for the young.

L. ZurligenReviewed in the United States on August 25, 2020
4.0 out of 5 stars
Makes me appreciate his talent more, his personal life less
Verified purchase
This film is an overview of the life and career of my favorite singer/songwriter that makes me appreciate his talent more, his personal life less. Unfortunately, the filmmaker chooses to start out with Gordon’s politically correct but unnecessary apology for a perfectly good song, “That’s What You Get for Lovin’ Me.” He even drops an F-bomb. Then the opening credits start. So if you want to avoid that part, just fast forward till you see the opening credits. They talk about his two failed marriages, but not a word about his current one, although you do get to see his young wife a time or two. And why in the world do they interview Alec Baldwin?
29 people found this helpful

Aunt Cherrie BReviewed in the United States on September 10, 2020
4.0 out of 5 stars
I watched for a Friend, but got sucked in by the music
Verified purchase
My friend, Mo, loved Gordon Lightfoot all his life. Mo lived far away so I rarely saw him, and now I fear he has died, since his twice a year phone calls have stopped. As a memory signal to think of Mo, I have the album cover for "Summertime Dream" beautifully framed and on my wall. So when I saw this documentary I watched it for my friend who I believe has left this planet. After the first twenty minutes, I started to like the music way more than I dreamed I would, having just previously appreciated "Sundown." Talent is actually rare, especially songwriting. And the homage to his guitars was heartfelt. I imagine his guitars were the loves of his life, since he seemed, as many talented musicians are, lost to the people around him. For an few minutes I thought maybe he was not addicted to a substance, but lo and behold he had been an alcoholic. The film-makers, to their credit, dwelled on his songs and kept the camera from jumping around, so we felt as if we were listening to Gordon in person. I thought they did a very fine respectful job, Older Gordon was just delightful. A pleasure, this biography of the life of one of the top Canadian musicians. I gave it four stars for being a little long.
20 people found this helpful

WallflowerReviewed in the United States on September 11, 2020
5.0 out of 5 stars
Gord IS Gold!
Verified purchase
I've owned a copy of Gord's Gold since around the late 70's. First in vinyl, then cassette, now cd. This has for over 40 years been my favorite and most played album. I know the songs better than my own heartbeat.

Watching this documentary and discovering how hugely important Gordon's music has meant to the world was awesome. The songs tell of his own history or a certain piece of American history but for many of us, there are personal histories that play in our heads as we hear his music.

What was really cool that aside from his music, was discovering how truly likable and honest he is as a person. A man who admits his failures, desires reconciliation but also like the rest of us admits he still makes mistakes. So often you learn that musicians you appreciate are truly unlikable and this makes it so difficult to continue listening. Now I think I love his music all the more!

What a tale is told here. Why there are only 4 ratings including my own is stupefying. God bless you Gordon and thank you for sharing your heart with the world. I have always thought that if you were a believer, what beautiful hymns you could write. Like Fernando Ortega, my other favorite musician (hymn writer), you have way to get into the heart with your words and what a change you could affect by your weaving of words. imo... :)
14 people found this helpful

John WernerReviewed in the United States on September 6, 2020
5.0 out of 5 stars
I've Heard His Music But This Documentary Introduced Me To The Man Quite Nicely
Verified purchase
When I was a teenager Led Zeppelin was cool and even softer stuff with bonafiable ROCK & ROLL cred like Peter Frampton. Gordon Lightfoot was not. That changed when I was 16. That's when "The Wreck of the Edmund Fitzgerald" hit. A what a hit it was...apparently a world-wide smash. What my young mind could tell is that it was a the most atmospheric and cineamatic story song I'd heard. It certainly added weight as it was a very moving true story which otherwise would have likely escaped the notice of the greater masses. This song, along with the fact our progressive FM the next year played his more electric (& quite catchy) Endless Wire title track made me certain that Gordon Lightfoot was cool. Later with more mature ears I got Gord's Gold and found he was a totally awesome folkie even if "he ain't heavy". This excellent documentary sheds so much more "light on Lightfoot" than most of us knew. Being a Canadian artist made his persona a bit at a distance even as his music broke American radio regularly. I truly, as a music buff, enjoyed this documentary and think you will too, perhaps even if you're not particularly a fan. Simply well done and pretty candid.
15 people found this helpful

C. E. MaguireReviewed in the United States on January 16, 2021
5.0 out of 5 stars
Blast from my past !
Verified purchase
I grew up listening to Gordon Lightfoot, but never actually realized just how many songs he had written throughout his long career. This program was very informative and gave me an even greater appreciation for a much loved and very talented singer songwriter. Of course, The Wreck of the Edmund Fitzgerald was included, which having been born in Michigan, I especially love. I grew up in Maryland, but was so proud to tell my school mates that I had come from the Great Lakes, where Gordon Lightfoot was singing his famous ballad about. My kids were all introduced to that song, and others and all 4 have favorites of his as well. This show was a wonderful blast from my past, And if you happen to ever read any of these reviews Mr. Lightfoot, all I can say is, Thanks for the music ! Your talent is a true gift :)
9 people found this helpful

Robert BidinottoReviewed in the United States on January 21, 2021
5.0 out of 5 stars
The Greatest Folk Song Composer/Performer of All Time
Verified purchase
Gordon Lightfoot is one of, if not "the," greatest folk song composers and performers of all time. For decades, his clear, high-baritone voice was mesmerizing, a storyteller's dream. His lyrics were sheer poetry, laced with indelible metaphors, haunting imagery, poignant and potent emotion. His melodies were the kind that, once heard, became engraved in memory forever.

And there were so, so many of them, covered by countless artists across musical genres. Consider:

If You Could Read My Mind. The Last Time I Saw Her Face. Early Morning Rain. Song for a Winter's Night. Canadian Railroad Trilogy. Beautiful. Wreck of the Edmund Fitzgerald. (That's What You Get) For Lovin' Me. Carefree Highway. Softly. Ribbon of Darkness. Don Quixote. The Way I Feel. Did She Mention My Name. Minstrel of the Dawn. Sundown. Bitter Green.... on and on they go.

Lightfoot (still alive and in his 80s) was a troubled soul; yet he was a meticulous craftsman and driven perfectionist who, for over half a century, somehow managed to transform his private demons into musical gold. My wife and I just watched this absorbing documentary about his life and work, and we found it fascinating. We think you will, too.
7 people found this helpful

MalayagroveReviewed in the United States on February 5, 2021
5.0 out of 5 stars
An emotional experience for me
Verified purchase
Like everyone else of the times, I was taken by his music. I sort of wondered about him in the back of my mind but that was it. So this film was a fabulous and surprising treat. I had no idea who he was beyond his photo profile and music. The reviewer who likened LIghtfoot physically to Errol Flynn was spot on. He was appealing in every way, and amazingly, hardly less attractive in his 80's though he looked like a different person; so aquiline. I enjoyed being transported back in time and also - to Canada. ;) His hometown of Orillia looked like the most idyllic town ever. And it was interesting learning about the Toronto scene of the 70's, the confluence of stars there and how he fit in there, including with Joni Mitchell. Oh - and I cried through a lot of it out of pure nostalgia....
5 people found this helpful
See all reviews
Back to top
Get to Know Us
Make Money with Us
Amazon Payment Products
Let Us Help You
EnglishChoose a language for shopping. United StatesChoose a country/region for shopping.
© 1996-2022, Amazon.com, Inc. or its affiliates