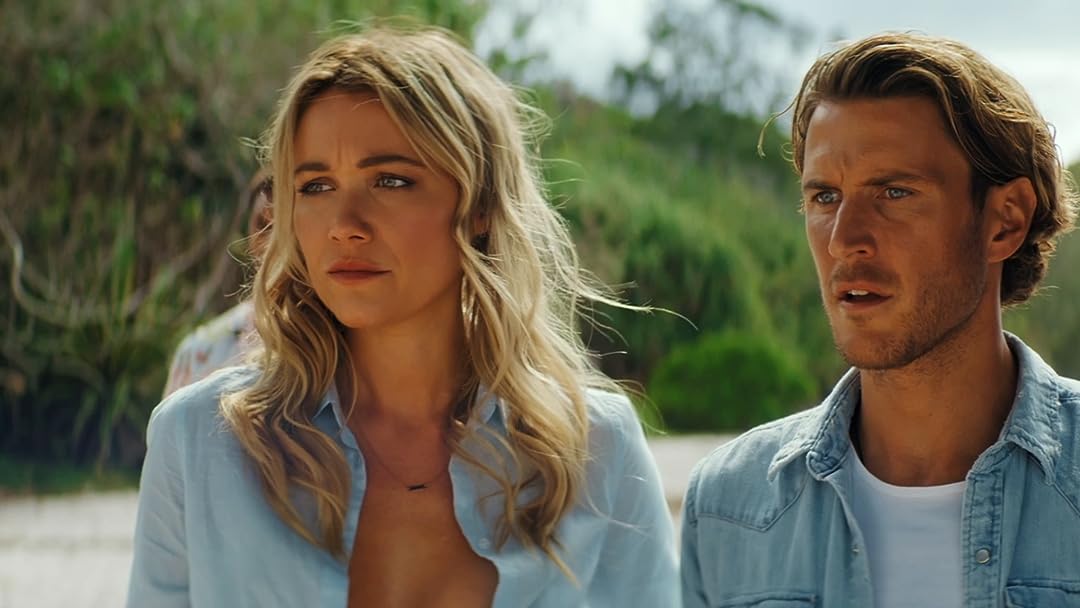 (1,370)4.11 h 31 min2021X-RayNR
A tourist trip turns into a nightmare when five seaplane passengers are stranded miles from shore. Forced into a life raft, they are menaced by a terror just beneath the surface.

Amazon CustomerReviewed in the United States on July 20, 2021
1.0 out of 5 stars
Super Trash
Verified purchase
Another piece of crap offered by Amazon. Whoever finds these movies should be fired because this joke is getting old. Day after days we are given crap movies like this one that cost money. Amazon, you are a thief, and movies like this prove my point. The animation is God Awful, and the acting is cheesy. There is nothing entertaining about this movie. The only scary thing about this movie is the fact that it’s for sale. What a shame.
15 people found this helpful

ISpeakLikeCarlSaganReviewed in the United States on July 18, 2021
1.0 out of 5 stars
Had to check my shoe after watching. Nope. It was the movie.
Verified purchase
The acting is as insipid as the story. You care about no one. Each person reacts more stupid than the last. As people die, no one cares for more than 30 seconds. I called out every move about to happen as we watched it and yup --- right on cue it happened. Why a shark would follow these people for 150 miles is beyond me or anyone.
11 people found this helpful

John MitchellReviewed in the United States on August 16, 2021
3.0 out of 5 stars
a well made, tense, horror film. Don't listen to
Verified purchase
People were probably expecting the same kind of big budget, glossy shark film as "the Meg", and that's the reason for all the sour and really juvenile reviews.

This is just one of many low budget creature features i have enjoyed, and although i am a fan of most of the bad B movies out there, this isn't one of them. It's cast is quite good, the cinematography and sound is quality and the story, while simple, fits perfectly. For anyone afraid of sharks or open water, the film does a surprisingly good job of keeping things tense, and the actors help pull it off. You won't find a lot of bad looking Cgi sharks, almost all of it looks really good, and most of that was helped by the fact they filmed a lot of underwater shark footage. yes, there is a couple cheesier scenes where you can tell the shark isn't real, but they are quick and forgivable.

It was a nice surprise, especially in this day of really cheaply made knockoff student film type horror movies.

RL SlyReviewed in the United States on July 20, 2021
1.0 out of 5 stars
Deserves 0 Stars
Verified purchase
Horrible movie - terrible acting, embarrassing script, and unbelievably bad CGI. They are really taking from the customer with these rental rates, particularly for bad movies. This should not have been seven dollars to rent. Insane and increasingly disappointed with Amazon.
8 people found this helpful

DamienReviewsReviewed in the United States on August 10, 2021
2.0 out of 5 stars
Beautiful but Stupid
Verified purchase
This movie is an absolutely stunning work of visual art. The director of photography captures underwater imagery with a real sense of dread and impending doom while also balancing that with utterly gorgeous aerial work that manages to simultaneously express the beauty and terror of the wide open ocean when used in different contexts.

But it’s just such a shame that the rest of the movie is a stupid, terrible, mind-numbing waste of digital celluloid. There is nothing else worth even a second of your time, so you might as well fast forward through it and just appreciate the visuals. I was going to say fast forward through the “plot,” but it’s an insult to the very concept of storytelling to even insinuate that the mishmash of nonsense stringing together the scenes of sharks would qualify as a plot.

I’d say that the story is a joke, except telling a good joke requires understanding the premise of setup, development, and payoff that this writer and director both seem to lack. Imagine someone saying “knock knock,” and then when you ask “who’s there” they say “honey, this one’s eating my popcorn” and then expect you to laugh uproariously. That’s not how jokes work, that’s not how stories work, but that’s how this garbage pile works.

**SPOILERS**
An example is the first scene when the tourists arrive. Firstly, the directors seem to think they’re clever with their visual references, and clunkily, obviously cop the introduction of Rose in Titanic for Female Tourist aka Michelle. But this gives way to one character Benny and Michelle making eyes at each other like they know each other, or they’ve slept together, or literally have any other prior relationship you can name. Which would be a fascinating dynamic to play out on a life raft with Michelle’s inconsistently controlling fiancée.

But NOPE, it just pays off with fiancée and Benny standing up in a life raft to fight. Why do they do that, you may ask? Because they have to: no one has been eaten yet, so the characters have to get stupider and stupider until someone dies.

**SPOILER**
Male Tourist is an investment analyst who is scared of the water. His job is literally mentioned only once, as an excuse for him to be pissy with the pilot/captain, and his fear of the water doesn’t serve literally any justification whatsoever. But then again, nothing about any of the blank slates of lunch meat this movie calls characters means anything, because none of them are in conflict except when they need to be, none of their stories develop, none of them have a single iota of internal consistency or emotional challenges to face.

These EPs made 47 Meters Down, which is infinitely better than this pathetic, failed, useless Jaws remake.

So skip this chum bucket and go watch either of those shark movies, don’t make my mistake.

Mike FillmoreReviewed in the United States on July 26, 2021
2.0 out of 5 stars
Tame Shark Attacks
Verified purchase
Occasionally you stumble on a hidden gem of a movie, if you weed through enough trash. This, unfortunately, is not one of those gems. There was some beautiful photography of sand and surf, but little else. Acting was fine for the most part. There were strange glances back and forth between the characters Benny and another guy's wife Michelle, like they had slept together or at least knew each other from another past event. No, nothing, just meaningless looks. Not enough shark violence and what there was, was pretty tame. Spoiler* When Benny gets eaten as they try to get him back in the boat, the woman says "I was just holding his hand." The camera then should have panned down to show us she was still holding his disembodied hand. That's the kind of shark movie I want to see.
2 people found this helpful

CamilleReviewed in the United States on July 24, 2021
1.0 out of 5 stars
Horrible movie
Verified purchase
The one star I am giving this movie is for the actors, as I think they did a good job. The rest of the movie was absolutely horrible. Not only was this movie lacking in suspense, drama and action, but the brutal killing of the very real looking white shark was horrific. The writing was dull, predictable and downright boring.
Being a shark advocate, I was expecting a fun summer cheesy shark movie. Sorry to say, don't waste you time and money on this movie.
3 people found this helpful

Cara CookReviewed in the United States on September 24, 2021
2.0 out of 5 stars
Don't rent/buy this movie!
Verified purchase
I have loved shark movies since my mom let me watch Jaws when I was 8 years old. I have watched all of the Jaws movies many, many times and I love them (except the fourth one). I really loved The Meg. Shark movies can be cheesy and I still love them. This movie was horrible. I only gave it 2 stars because *spoiler alert* I thought the idea of the people trapped on the raft was interesting and the abandoned ship looked cool. The special effects were pretty horrible. The "shark" was pretty much just a very obviously animated shadow most of the time. The ending really made me mad. Just, don't watch this. If you're thinking "oh, but I really love shark movies" just trust me. You will be mad if you pay money to watch this trash.
See all reviews
Back to top
Get to Know Us
Make Money with Us
Amazon Payment Products
Let Us Help You
EnglishChoose a language for shopping. United StatesChoose a country/region for shopping.
© 1996-2021, Amazon.com, Inc. or its affiliates