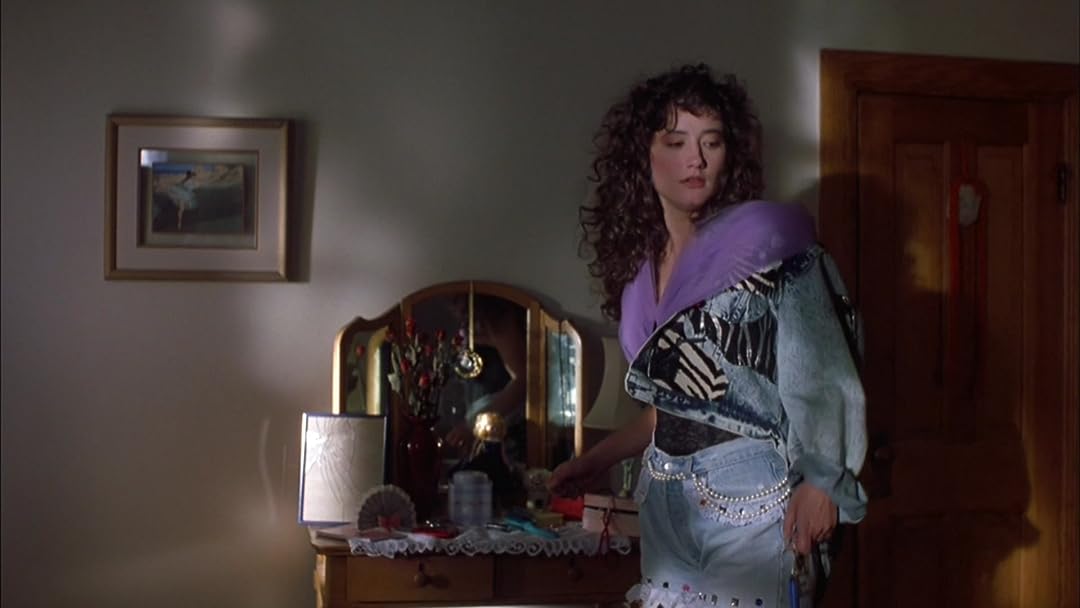 Halloween 5: The Revenge of Michael Myers

Forest NymphReviewed in the United States on April 15, 2021
3.0 out of 5 stars
So Derivative It's Worth Seeing
Verified purchase
When this hilariously bad movie was released I don't remember if Twin Peaks had been on television yet, but the character Sammi literally looks like Laura Palmer with her long blonde hair and oversized cardigan, and there's also some 1950s throwback bad boyfriend character. Furthermore, Michael Myers has developed a seething jealousy of Freddy Krueger and has found himself a pair of pointy black boots, a long heavy metal coat, and even kills with a claw looking scythe. In fact, there's a real sense of Nightmare on Elm Street throughout the tone of Halloween 5 from the spooky abandoned haunted house in Haddonfield, to a greater overall emphasis on the supernatural.

Speaking of Jamie, she's transformed from innocent victim to mommy stabber to a vaguely middle aged psychic woman who may or may not suffer from a form of catatonic schizophrenia (I swear this is completely derivative of some 70s atmospheric giallo I can't quite recall).

To top it all off, the new final girl Tina is so obnoxious that I kept wishing she would be the first to die.

Richard CavelleroReviewed in the United States on February 24, 2020
4.0 out of 5 stars
Flawed but entertaining
Verified purchase
Michael returns again in this rushed sequel that's still quite a bit of fun. Picking up a year after the events of its superior sequel. Jamie now lives in a foster home and is mute. Once again played by a solid Danielle Harris. After falling down the well in the last film he's saved by a homeless dude and awakens a year later to try and get Jamie once again. This entry is a little uneven tone wise. There are weird lapses in humor most because of two goofy cops. Michael is still in pretty strong form but his victims are mostly forgettable. Sadly Ellie Cornell is only in a small part and the new final girl Tina isn't as strong. It all leads up to a questionable finale and although nothing is on par with the rooftop sequence from the last film. The laundry schute scene is pretty terrifying.
3 people found this helpful

D. DowlerReviewed in the United States on October 2, 2019
5.0 out of 5 stars
Underrated Gem Of The Halloween Series
Verified purchase
In my opinion, the most underrated film in the Halloween series.
I had also recently re-watched Halloween 4: The Return Of Michael Myers and realized it wasn't quite as good as I remembered, aside from the excellent ending.
Whereas, following up that film with a viewing of this direct sequel, I was pleasantly surprised to discover this film was much, MUCH better than I remembered.
The POV scenes of Michael stalking his prey are EXQUISITE, one in particular, in the home of one of the main characters of the previous film, is among the best, if not THE most suspenseful sequence of it's kind in the entire series.
At times, the direction and cinematography capture a certain aura of everyday evil, a suburban gothic, the afternoon-sun-washed dread of knowing the facade of modern commercial civilization will NOT protect you from the law of the jungle when a wolf, especially one as merciless and so skilled at his craft as one Michael Myers, descends from the hills...
Not to mention absolutely STUNNING night cinematography and use of shadows during the film's climax in the decaying, "haunted" Myers house.
As for characterization, this was the last great performance of Donald Pleasance as Dr. Loomis, far more captivating than his final turn as the character in the next sequel, "Halloween (6): The Curse Of Michael Myers".
Along with delivering more iconic lines about Michael's pure evil nature, he's at his most unhinged at times, he's had ENOUGH at this point, even going so far, in a few borderline disturbing scenes, as terrorizing the character of then child actor Danielle Harris, returning from Halloween 4 as "Jamie Lloyd", whom yet again shows herself to be a great talent, even at this early age, and her character having developed an interesting "psychic-link" of sorts with her uncle, Michael.
Most every other featured character serves their role well, with some bringing real emotional substance to the plot, with their relationship to Jamie.
The film isn't a flawless entry of course, I don't particularly care for some creative choices, such as the sanitized decision to largely cut away from Michael's carnage as he wraps his jaws around his prey, so to speak.
Perhaps most glaringly, while Halloween 4 wasn't nearly as good as I remembered, it still had one of the best endings of the series; this film, however, despite being far better than I recall, still has one of the weaker conclusions to any Halloween film; a "cliffhanger" ending, foreshadowed by a minor, out of place subplot, to set up a sequel that would not arrive until 6 years later and mostly not deliver on the premise, though the "Producer's Cut" of Halloween 6 is unquestionably superior to what was released in cinemas.
Regardless of it's relatively minor flaws, it's still a more interesting, rewatchable, SUPERIOR film in practically every facet over the recent, highly overrated "Halloween (2018)".
Halloween 5 is the often criminally overlooked hidden GEM in the Michael Myers canon.
4 people found this helpful

Elvis PReviewed in the United States on October 21, 2017
5.0 out of 5 stars
BEST PUMPKIN OPENING OF ALL ENTRIES IN THE SERIES
Verified purchase
SPOOKY, GREAT CAMERA WORK, CAR SCENE AND LAUNDRY SHOOT VERY CLEVER....COULD HAVE BEEN BETTER.
One person found this helpful

Amanda RiordanReviewed in the United States on January 10, 2021
5.0 out of 5 stars
Great movie!
Verified purchase
Great movie and quality! Bought it for my husband and he loves it. Would definitely buy again! Fast shipping.

Amazon CustomerReviewed in the United States on November 11, 2017
5.0 out of 5 stars
#Obsessed
Verified purchase
You can’t go wrong with this series 😍
One person found this helpful

AZTROGRSReviewed in the United States on August 6, 2020
5.0 out of 5 stars
Great Movie
Verified purchase
High quality presentation. Great installment to the classic series.

Tara GeskeReviewed in the United States on January 13, 2021
5.0 out of 5 stars
Pretty good movie
Verified purchase
As far as the series goes, not the best of them but not the worst of them.
See all reviews
Back to top
Get to Know Us
Make Money with Us
Amazon Payment Products
Let Us Help You
EnglishChoose a language for shopping. United StatesChoose a country/region for shopping.
© 1996-2021, Amazon.com, Inc. or its affiliates