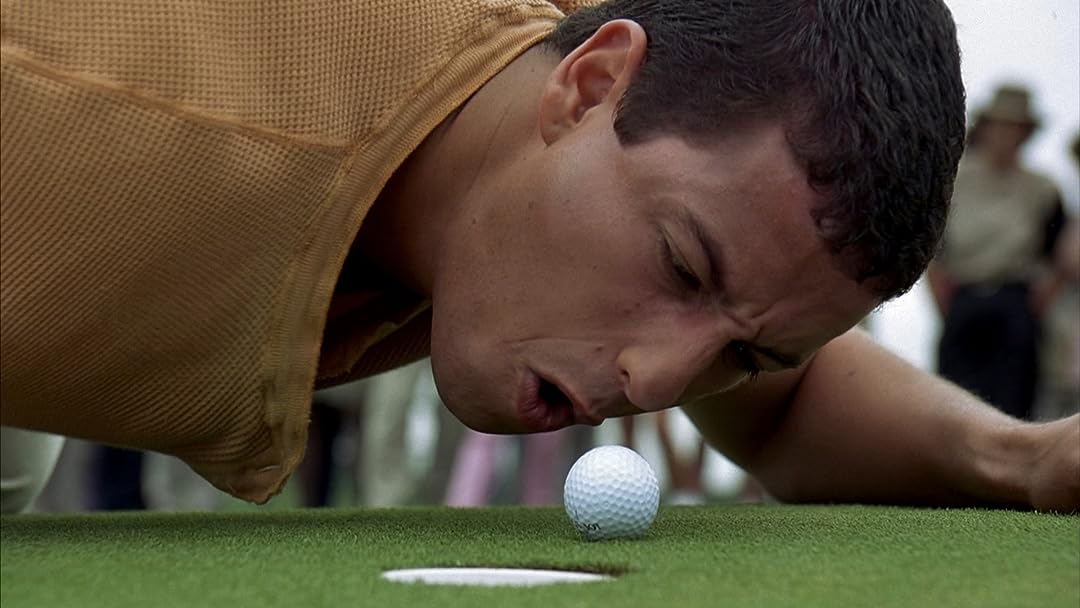 Johnny go GolfReviewed in the United States on January 27, 2020
5.0 out of 5 stars
For all people including thise with goofy pants and a fat...
Verified purchase
Back in the day of physical VHS rentals from Blockbuster people would stand outside waiting for others to return this movie. The demand was insane and taught patience, something this spoiled generation hasn't had to experience due to one click rentals.

Old school tradituonal golfers pre the Tiger Woods era tend not to like this because it's 'not realistic golf.' This is a classic Adam Sandler movie.

In short: this is not your typical goofy pant wearing and fat a** golf movie.

YuppiePrepperReviewed in the United States on April 3, 2020
1.0 out of 5 stars
Terrible
Verified purchase
Wow this is awful

I do understand that this movie is 30 years old, but many people produce better youtube videos than this crap

Sandler is just not a funny 'comedian' then combine his lack of talent with poor cinematography and you have a highschool level skits, not a movie.

joel wingReviewed in the United States on July 14, 2021
3.0 out of 5 stars
Adam Sandler gets to fight game show host Bob Barker
Verified purchase
Adam Sandler becomes a novice pro-golfer to try to win some money to save his grandmother. He’s cast in a familiar role as the outsider and of course plays it up for the laughs. One of the best parts is when he’s paired with game show host Bob Barker and ends up getting into a fight. Other noteworthy performances are by Carl Weathers as his coach and Richard Kiel of Jaws fame from the James Bond movies as a Gilmore fan who shows up at his tournaments. I put Happy Gilmore in the middle of Sandler’s movies. It’s good but there are some better ones.

Mary J.Reviewed in the United States on May 23, 2019
3.0 out of 5 stars
Funny but laced with profanity
Verified purchase
I thought this would be a good film for kids age 8-10 but the language and violence were shocking to me. I realized this too late, though, and the boys loved it.
3 people found this helpful

Momof4kidsReviewed in the United States on August 16, 2019
5.0 out of 5 stars
Awesome movie
Verified purchase
Still one of my all time favorite Adam Sandler movies.
4 people found this helpful

Banjo BennyReviewed in the United States on December 22, 1999
5.0 out of 5 stars
&quot;Sure! - Friends listen to &quot;Endless Love in the Dark!&quot;
Verified purchase
What I loved about this movie was the ACTING. It works because Adam Sandler is brllliantly "real" at all times, even though he plays a silly character in silly situations. His commitment to the role is breathtaking. Somehow you really believe this character would punch out his caddy, go beserk on national television, have a heated argument with a golfball, and threaten a plastic clown face with death! Yet at the same time, the character has an innocence and guilelessness that allows us to forgive him his excentricities. He's just an Everyman who is out of his element, trying to find his way. If he causes tumult and chaos in the area around him, it is forgivable because he is only doing what he has been trained to do, for all of his previous life. "Happy" remains a likeable character even while he is punching out Bob Barker! That is the genius of this movie.
People might tell you the plot of this movie, and all the funny skits that are in this movie, but you still might not get it. I don't think I would have "gotten it" just by hearing a recounting of the plot. The script is funny, and it's a good vehicle, but the reason I have watched this movie over and over again is because Adam Sandler is SUCH a good actor. He makes you BELIEVE. Comedians never get enough credit for this, but in a movie like this one, which is really a pretty bizarre situation, it is his ability to take us into a mode of suspended reality that makes the movie work: he makes the incredible plausible. Bravo!
4 people found this helpful

TSibReviewed in the United States on May 31, 2019
5.0 out of 5 stars
Feel good laugh hard
Verified purchase
I usually get a bit impatient with super silly movies but Adam Sandler kills it in this movie. His characters are flawed and dynamic and there's so much irony here. I really enjoyed watching this for date night. Rent it!
2 people found this helpful

B. CastroReviewed in the United States on March 25, 2021
4.0 out of 5 stars
Typical Adam Sandler comedy.
Verified purchase
I grew up watching Adam Sandler. I like his movies. They're not meant to be deep, or thought provoking. Just funny, and entertaining. If you go in with that mindset they work perfectly. Can't ask for a lot more.
See all reviews
Back to top
Get to Know Us
Make Money with Us
Amazon Payment Products
Let Us Help You
EnglishChoose a language for shopping. United StatesChoose a country/region for shopping.
© 1996-2022, Amazon.com, Inc. or its affiliates