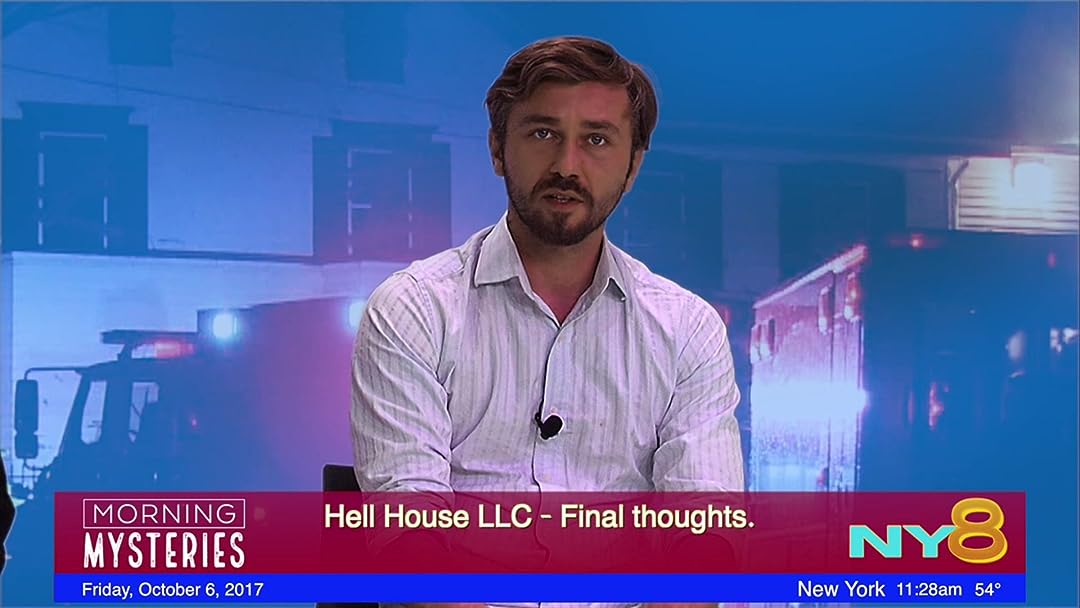 Joe SmartReviewed in the United States on October 6, 2018
2.0 out of 5 stars
Terrible Blair Witch throwback
Verified purchase
This sequel nobody asked for to the completely forgettable Hell House LLC attempts to revive the Blair Witch style found footage/faux documentary horror film with no success. The movie is polished enough but is operating from the exact same template as Blair Witch where the bulk of the film consists of watching the characters be panicky and terrified even though from the horror viewer's perspective nothing scary is actually happening. It also doesn't help that the filmmakers can't figure out how to put its characters in peril without making them complete imbeciles. It's impossible to root for or care about what happens to any of these characters. The filmmakers also seem to think viewers are actually going to remember particulars from the first film which is assuming way too much.

The only reason this one doesn't get one star is that there is actually a fairly neat twist near the end. Unfortunately, the twist makes it all the more frustrating that the filmmakers chose the lame Blair Witch template to tell their story. Even more frustrating is the fact that the sequence where the twist is revealed near the end of the movie is not only the only effective thing in the entire movie but it's also a complete cheat that doesn't fit in at all with the fake documentary style of the rest of the movie. The scene is technically being filmed by one of the characters but there is no way the villain could ever let anybody outside of the hotel see the tape--which includes us (the viewing audience) which means it isn't part of the assembled footage that we are supposedly watching. This is also not the only place where the filmmakers cheat but they stick to the Blair Witch format enough to ruin their movie just the same.

The ending, unfortunately, suggests that another sequel is possible but other than the cast and crew and their friends and family it's impossible to imagine the potential audience for another one of these.

D. RaderReviewed in the United States on September 23, 2018
4.0 out of 5 stars
It had a lot to live up to!
Verified purchase
This installment isn't quite up to par with the original movie. But it did have a lot to live up to. Mr. Cognetti certainly knows his way around subtle horror. He showed that in the first movie and once again delivered some of this in the second. There are some issues where it seems he took things a little over the top and to discuss it here would be spoiling the movie. It doesn't destroy the movie, but it goes against the "less is more" philosophy that I feel works so well in horror. Still none of this detracts from the movie and the movie is not ruined by this moment. There is plenty here to feel unsettled about just as it was in the first movie. Give the movie a chance.
8 people found this helpful

Keelan O'HEaReviewed in the United States on October 17, 2018
5.0 out of 5 stars
Maybe not worth a full five, but we need more horror like this!
Verified purchase
As a big fan of horror it's pretty easy to get bogged down in a lot of the crud that comes out of the pipeline, and, while it has its flaws, this movie certainly hits all the little bits that get my spookilies all dookilied.

-The"Haunted House" vibe makes a fantastic setpiece for a horror movie, and I feel that it gets more freedom to live up to this aspect than it did in the original. The consistent wondering of "is that a prop?" helps to keep you guessing.

-Really the proper use of the found footage format. The momentary blindness as the camera lens adjusts from a light to dark area is very well executed to add to the tension.

-Like the first, the best scares are all simply done practical effects. A figure that wasn't there before, one that was there but now isn't, a moving of a head or arm of a mannequin. The lack of a "sting" or other audio cue helps to accentuate the idea of "has it always been like that?"

-The scares where they went away from their strong suits really took me out of it, particularly with a couple uses of fairly poor CGI near the end. I understand that some things can't be done practically, but there might be times where it's worth it to cull a scene or edit a shot if the CG just won't work.

-Like almost all horror movies they really struggled with the ending. Hitting a crescendo while maintaining an aura of fear is hard to balance out, and it's no wonder that most horror movies struggle to hit that mark. I'd say that most of my issue with the ending is that A) They took the mystery out behind the shed and shot it, giving away all of those juicy secrets that were fun to ponder on and made the movie creepier, and B) The secrets were all fairly predictable. Without spoiling anything, I'll just say that, yes, your theory was probably right. One of the twists to the story was fairly unexpected, but it rings a bit too much of the "Grave Encounters" movies for me to give it a full "good twist." It certainly does make more sense with Hell House though, so I'll give the filmmakers credit for improving on an idea.

TL; DR: A great horror movie to get you in the Halloween spirit. While it suffers from a lot of the drawbacks that almost all horror movies do, it definitely makes up for it in the scare factor. Now I'm off to see the first one again to see how they compare!
6 people found this helpful

Richard A. ColeReviewed in the United States on June 23, 2020
2.0 out of 5 stars
Tired and un-original
Verified purchase
First- Is the "static on the film" a standard effect on every movie editing software? The over use of static was tedious and cheaply done. It would have been better if used sparingly, but this film was a fast money grab to profit from the first film. Which I did like... Having seen ALL 3-- the 2nd and 3rd are just awful and nothing new or original is done in this or the third film.
They have the same bad actors with bad hair and bad facial hair as an attempt to show age, maturity or something else. Which can't be done to cover-up crappy acting and a tepid story. The third and second are just the same, bad, bad acting that is never once believable, redundant, and becomes tired quickly.
The same scares are used ALL THE TIME, and become lame quickly. Such as props being moved, people walking by in shadow, people appearing when you eneter a basement or room. Or they just stand up or appear in the background. All cool during the first, tepid on this one, and just boringly predictable and stupid by the third. Not even any nudity, which horror has, but not even nudity can save the 2nd and 3rd part of the hell house trilogy.
Don't bother with either of these, and appreciate the first one. If you watch the first, after seening the last two bombs, it may seem just as silly as the rest, Find another movie to watch. And 'Shudder" doesn't have much better of a selection, you see everything after just a few days..... Just a FYI

DerrickReviewed in the United States on October 5, 2018
1.0 out of 5 stars
Boooo!
Verified purchase
How they could manage to go from such a great flick to this is unreal. I have almost no words to describe what a terrible sequel this is. They could have literally followed the same blueprint as the first one and had a great movie. This was just bad bad bad. They either wanted a quick bit of money with little effort or they went way too far trying to make something scary that isn't. Mystery is scary. The move the bad guy is seen, the less scary the movie. Use the villain sparingly...never show too much. The imagination can create a far scarier image than the makup man/CGI guy. Boooooo!
7 people found this helpful

Keri BodaReviewed in the United States on September 23, 2018
5.0 out of 5 stars
Lived up to the first one!
Verified purchase
I am a HUGE fan of the first film and have told literally everyone I know to watch it. I'm doing the very same thing with Hell House LLC: The Adaddon Hotel. It's a another great found footage film and honestly, it's on my favorites list. I jumped, I screamed and I yelled at my TV. Don't miss this film!
4 people found this helpful

J. LeeReviewed in the United States on September 24, 2018
3.0 out of 5 stars
Gone to the well too many times...
Verified purchase
First one was cute and all, but this one is just too much: Too much bad acting, too much bad, unbelieveable hokey story, too much dead space, no real surprises.

I did give it 3 stars because it does actually make a coherent tale when combined with the first one, but still nothing all that compelling.

If you can get past the acting and the writing and the pretty bad SFX, and if you REALLY, REALLY liked the first one, then you'll probably at least get through this one without shutting it off, but other than that, it's a "meh" from me.
5 people found this helpful

blunt raptureReviewed in the United States on September 7, 2021
1.0 out of 5 stars
DON'T WATCH IN THE DARK! OR DAYLIGHT! OR DUSK! OR AFTERNOON! OR MORNING!
Verified purchase
I finally watched a Hell House and Hell House LLC II.

I used to be intrigued by found-footage movies --- until I saw the Blair Witch Project, the only movie that has ever made me want my money back. Incredibly stupid and overly simplistic, it was a movie that was all dressed up but went nowhere. But what made Blair Witch so terrible was all the heavy breathing, panting, crying, sobbing, and sniffling that smeared the whole experience with snot:

The ending of Blair Witch is the most spectacular meh burger in a long history of horror movie disappointments. But we're not here to torture ourselves with the Blair Witch Project --- seeing it has caused people enough damage.

No, I'm only here to hate the entire Hill House trilogy.

This was just as good as the 1st Hell House movie. Which means it was awful.
And I'm a HUGE horror movie fan, able to suspend disbelief and lower my thrill threshold.
Sadly, my suspensions and thresholds were defeated.
Even though it's supposed to have been "found footage," it's the over-acting, under-acting, bad writing, and sad and directing that's at fault.

Apparently, the scariest thing is comatose people standing somewhere not doing anything.

Hell House LLC II has cemented my distaste for found footage movies.
They should all remain lost.
See all reviews
Back to top
Get to Know Us
Make Money with Us
Amazon Payment Products
Let Us Help You
EnglishChoose a language for shopping. United StatesChoose a country/region for shopping.
© 1996-2021, Amazon.com, Inc. or its affiliates