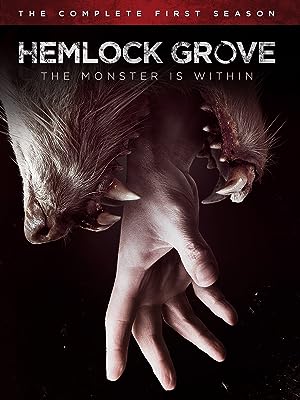 Season 1
(30)
7.0201318+
A teenage girl is brutally murdered, sparking a hunt for her killer. But in a town where everyone hides a secret, will they find the monster among them?

Shirley OswaltReviewed in the United States on January 12, 2020
5.0 out of 5 stars
Bill Skarsgard as Roman Godfrey , pure talent
Verified purchase
I actually loved it so I will be buying the other two seasons later on

FelishaReviewed in the United States on February 18, 2019
5.0 out of 5 stars
Emm
Verified purchase
Loved this show! Great for those who like the supernatural.

NealReviewed in the United States on December 13, 2014
5.0 out of 5 stars
Awesome and very wonderfully unexpected supernatural themes. Like Blood & Chocolate but in a series with more, more, more!
Verified purchase
Pay close attention or you'll miss important bits. Numerous in depth well acted characters that make up this story and it doesn't cater to people wanting a simple-minded scare fest. It's excellent on nearly every level, and season two is even better. Now if Netflix can get another season or two?!
2 people found this helpful

Maria LandschootReviewed in the United States on May 30, 2015
5.0 out of 5 stars
I love, love
Verified purchase
I love, love, love this show. It's so unusual and creepy and great. If you like fantasy and horror, watch this show.
One person found this helpful

GatheraheartReviewed in the United States on March 10, 2015
5.0 out of 5 stars
Five Stars
Verified purchase
One of the best and weirdest shows ever !
One person found this helpful

MyD -- The ViewpointReviewed in the United States on December 10, 2014
4.0 out of 5 stars
DARK, TWISTED, GOTHIC TALE - THE KEYS TO UNDERSTANDING THIS DIVISIVE BUT INVENTIVE SHOW - SEASON 1
HORROR ARCHETYPES DISTILLED DOWN TO SOMETHING DIFFERENT AND SLIGHTLY MORE HUMAN

In an early episodes we are given one of the keys to understanding this complex show. One of the characters compares a maze with a labyrinth. A labyrinth is not intended to mislead us, but always takes us in the correct direction no matter where it winds. This is true of the show also. It's never really trying to trick us with false leads so it can surprise us later. The show mainly feels impenetrable because it gives us many significant mysteries instead of just one. For most of the show, it introduces perhaps more mysteries than it does clues. But, they do not necessarily contradict each other. The last few episodes do bring more revelations and conclusions. The story has excellent flow despite reviews you may see. It just doesn't allow us to see everything we think it should at times. The most important thing to accept is that not all mysteries will be solved in a single season. The viewer has to absorb what is happening and wait as we progress through the labyrinth. Many people simply won't enjoy this format and that's completely valid. The viewer has to be willing to absorb some concepts and then set them on the shelf until they are addressed at a later time. It takes trust that we will understand each mystery eventually at different and deliberate moments.

THE PLOT: The very basic plot is a murder mystery wrapped in something much bigger and even darker than that. Peter and his mother are Romanian gypsy descendants who move back to Hemlock Grove, Pennsylvania. About the same time, murders of young girls begin to occur. Oh, Peter happens to turn into a wolf each month. Peter befriends Roman Godfrey, the son of a wealthy steel producing family that now owns a biomedical research company called the Godfrey Institute. Perhaps Peter feels some sort of kinship or trust in Roman because he also seems so unusual. In fact, there is something seriously off about the wealthy Godfrey family. In Hemlock Grove, everyone seems to be hiding some sort of secret. Roman Godfrey's sister Shelley is the one person who actually has the outward appearance of some sort of monster, yet is probably the one truly and completely good person in Hemlock Grove. Peter and Roman team up to stop whatever is committing the murders while a seemingly incongruous plot line emerges about extraordinary experiments being conducted in the "White Tower" as the Godfrey Institute is called. The plot further thickens as another character is introduced as a member of secret organization who hunts Peter's kind and is associating him with the murders.

Part of the strength of this show is that it keeps much of the supernatural in the periphery of our view. This allows the show to maintain some skillful mystique. We do see the change of the wolf however, and it is very inventive. This show is excellent at making the supernatural seem almost normal. As I mentioned, old horror archetypes are distilled down, reinvented and made somewhat more human, and mysterious. This is one of the other keys to understanding and accepting the show if you can. Part of the fun is identifying the archetypes as they are presented. Sometimes they are more subtle. The show is graphic, but a little less absurd than we usually see. The director and cast go way out of their way to create fascinating characters. Overall the production values and acting are outstanding. However, there are small examples of poor acting here and there. It's the only reason I dropped it to four stars instead of five. Keep in mind that five stars doesn't mean everyone will love it. People will hate the format I mentioned. The show is profane, bloody, disturbing and inappropriate in many places. However, it is complex and expertly constructed with fantastic character development and atmosphere. It walks a fine line of maintaining a little classic film style mystique, while giving modern audiences the shocking situations and gore they are used to. I wouldn't have thought it could be done but this show demonstrates that it can, so far.


5 people found this helpful
See all reviews
Back to top
Get to Know Us
Make Money with Us
Amazon Payment Products
Let Us Help You
EnglishChoose a language for shopping. United StatesChoose a country/region for shopping.
© 1996-2022, Amazon.com, Inc. or its affiliates