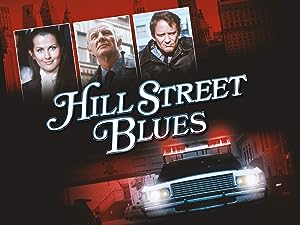 (205)
198513+
The excitement for the Blues is at an all-time high when Furillo comes under media scrutiny, Belker is kidnapped, Renko becomes a dad, and Davenport considers an assistant D.A. job.

Action still aplenty. Humor is still here for season 5, too.
Oh, I was a little it surprised how this show (over 7 seasons) had some actors reappearing in different roles (see CCH Pounder: hooker; mom, Kene Holaday: black coalition; homeless dad ... ; and the kid that plays Lucy's adopted son).
Might be worth noticing for worthless, "did you know....?" trivia points.

P A StuckReviewed in the United States on July 4, 2021
5.0 out of 5 stars
What happened to Joe Coffey.
Verified purchase
Great show and I wish it was still on T.V.

wolfpackReviewed in the United States on March 25, 2021
5.0 out of 5 stars
OUTSTANDING
Verified purchase
EQUALLY AS GREAT AS SEASONS 1-4.

r.a. dobsonReviewed in the United States on July 2, 2015
5.0 out of 5 stars
hill street blues set the standard for police drama
Verified purchase
what can you say, this was the best tv show ever on tv. with the addition of robert porsky as the roll call sgt. it stayed on track. what makes this show is all te problems and going on in the life of the officers, always problems, with the officers, seems like there life is just as much as a mess as the people they try and help. if you like police drama this is the standard for the rest. m sure you get the popcorn
2 people found this helpful

Laura PervierReviewed in the United States on September 30, 2016
5.0 out of 5 stars
Wonderful TV series
Verified purchase
Loved the show when it was on TV and immediately bought the first two seasons when they were out of DVD some years back. I'm thrilled someone finally got their act together and made the other years available. I'm slowly working my way through the series so I can spread out my enjoyment of it. It was such a great show. Treat yourself and purchase the DVDs.
One person found this helpful

Gerard TrianoReviewed in the United States on July 4, 2015
5.0 out of 5 stars
Outstanding Television
Verified purchase
Hill Street had been forced to reinvent itself by the 5th season and did so admirably. Major was the passing of Emmy winner Michael Conrad. He was peerless as roll call Sgt. Esterhaus. Robert Prosky did a fine job picking up the baton as new roll call Sgt. Stan Jablonski. New cast members Ken Olin and Mimi Kuzyk add fine support and the story lines are as riveting and clever as ever. Highly recommended viewing.
One person found this helpful

TSU-foreverReviewed in the United States on July 18, 2015
5.0 out of 5 stars
Memories....
Verified purchase
Great transfer. No problems with the DVD. Sound was very good. I'm looking forward to a good deal on Season's 6 and 7.
It brought back many memories that I had forgotten about. Actually, I guess I did not watch much of season five when it first came out because I did not remember much of what happened as each episode went along..
One person found this helpful
See all reviews
Back to top
Get to Know Us
Make Money with Us
Amazon Payment Products
Let Us Help You
EnglishChoose a language for shopping. United StatesChoose a country/region for shopping.
© 1996-2022, Amazon.com, Inc. or its affiliates