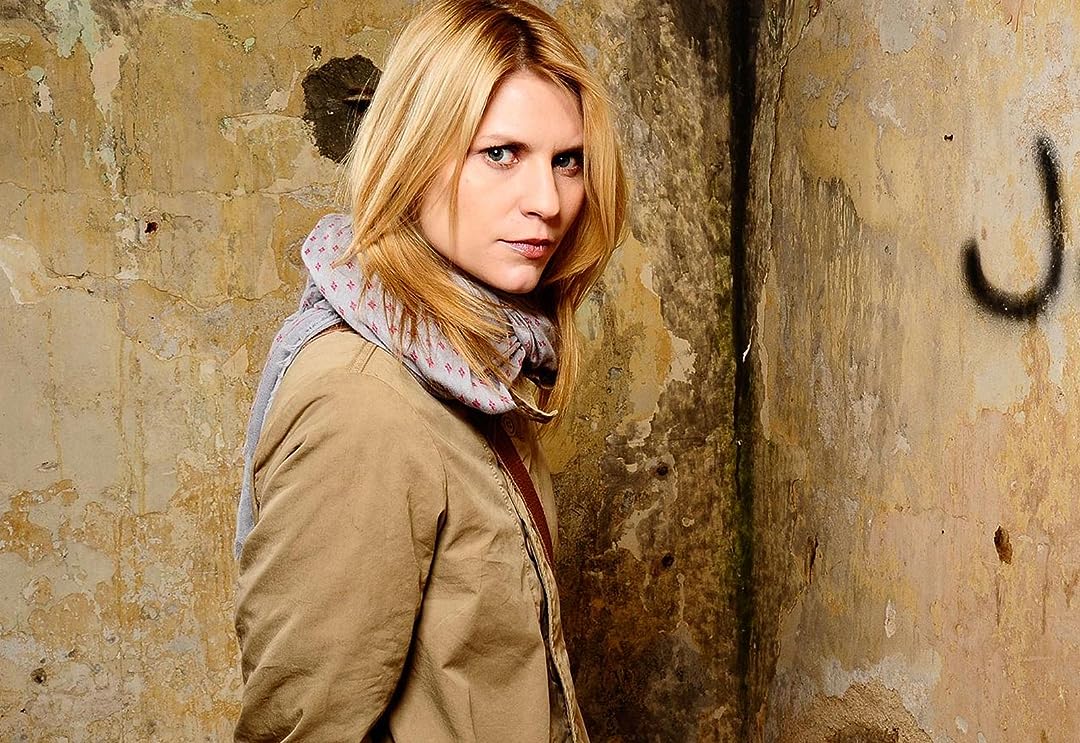 (6,958)
8.32011X-RayTV-MA
Carrie goes to extraordinary lengths to solve the latest crisis at the CIA; Brody struggles to survive; Saul must play many opposing sides to keep his job at the CIA.

ImperiumReviewed in the United States on August 29, 2019
1.0 out of 5 stars
Just another cable show...
Verified purchase
A TV show has to grab me at the very beginning, or I won't waste my time with it. This one didn't. Oh, wait, I have to stay with a show for the first few seasons before it "gets good"? Hard pass. I'm not going to waste my time watching a show until the directors and writers figure out how to do their jobs. And let's not forget the completely non sequitur and unnecessary sex scenes in here. But then, you've got to do something to appeal to the LCD's. Once again, a landfill somewhere will contain yet another TV show I've purchased.
23 people found this helpful

Ernest RobertsReviewed in the United States on February 25, 2019
1.0 out of 5 stars
What was I thinking?
Verified purchase
I usually know better than to buy mainstream TV crap like this. Maybe it was all the 5 star reviews, but still I should have known better. It would help me if the network that ran these series would be listed. That way I would know better than to buy them.

The dialog is dumbed down for the TV addicted public and the storyline is based on the nonsense that has been pushed on TV news about the war on terror. I hate this kind of thing, and I bought the first two seasons. Again, what was I thinking?

Suzanne NatafjiReviewed in the United States on April 10, 2018
5.0 out of 5 stars
Homeland Season 1: Riveting, Jarring, and Binge-Worthy!
Verified purchase
Although this Season 1 BluRay first episode, scene 1 was startling and awkward, it laid the way for and was indicative of the jarring, off-centering story line that followed through the entire season.

British actor, Damian Lewis, who played Nicolas Brody, a US Marine Sergeant, rescued by Delta Force, had to develop and use an American accent to play his part. He never slipped in any of his American-English pronunciation and was totally believable as his character and carried out his military behavior to a T. His character development and story line was also totally believable.

Claire Danes’ character, Carrie Mathison, a CIA officer, was often pitted against but often with Many Patinkin’s character, Saul Berenson, a CIA ME Division Chief. The dialog between these 2 was a joy to watch. The back-forth between these 2 was in great repartee – sometimes in the manner of a superior; other times in the manner of an older person to one that is younger; and yet other times as friend-to-friend.

Brody’s behavior with his wife, Jessica (played by Brazilian actress Morena Baccarin, who like Lewis had no trace of anything other than an American accent), was understandably fraught with problems. These problems were painfully being worked on by both characters for the sake of keeping the family unit in tact. There were many layers that Jessica had to get Brody to reconstruct in his behavior, and there were some that she tried to get him to deconstruct, so that she could better understand the person that he had now become.

Diego Klattenhoff, as Mike Faber, was a Marine Corps Captain and Brody’s best friend. He, like Brody, kept a secret.

I have to admit that episode 1 was so gripping that we had to fight hard not to binge-watch the entire season at one time. Even after watching individual episodes, we needed to digest what we had seen and decompress.

To help us do that, we developed a strategy to continue with keeping up a driving storyline with another series. That was House of Cards (HOC), also season 1. This worked for us. After watching an episode of Homeland, we could keep up the same interest and pace with an episode of HOC. At the end of the 2 hours, it was if we had seen a film, and we felt OK about not binging, but we could take the time to discuss both. We also made a ritual of doing this only 1 night per week.

This spell-binding series seemed to have had its script almost lifted from the international news, and kept us glued to the next 3 seasons. I think that we are due for even more current seasons!

This is exactly the sort of series that is worthy of discussing with friends who also watch it.

This is an outstanding series. Season 1 was rated as the 2nd-best TV show in 2011.

JaneReviewed in the United States on December 17, 2018
1.0 out of 5 stars
Pure Garbage
Verified purchase
If one wants to portray a Marine one should get a proper haircut. Other than that it is still garbage in my opinion. Which, like this show, means nothing. Most of what I find on TV is garbage...A waste of a wonderful invention.
16 people found this helpful

Robert HoryzaReviewed in the United States on September 30, 2018
1.0 out of 5 stars
Clean it up and it would be good
Verified purchase
Aweful lot of sex and nudity....unnecessary to the storyline
24 people found this helpful

H. WhiteReviewed in the United States on December 17, 2016
5.0 out of 5 stars
The best drama on television EVER!
Verified purchase
This is one of the most intense dramas I have ever watched. Every episode ends with a major cliff hanger and you just HAVE to watch the next one. Claire Dane is absolutely wonderful in her role. The way she plays her character, Carrie Mathison, is nothing short of brilliant, You can feel her anguish and frustration when no one in the CIA will take her suspicions seriously about Brody, a Marine Sergeant who was taken prisoner by terrorists in Afghanistan and held and tortured for 8 years before his rescue. The entire cast gives an A+ performance every time. A psychological thriller not to be missed!
11 people found this helpful

R. Edward Merrell, Jr.Reviewed in the United States on February 11, 2013
5.0 out of 5 stars
Home Grown Terrorism
Verified purchase
Saul: "What were his exact words, please?" Carrie: "An American prisoner of war has been turned." Remember those cliffhanger serials they used to show at the movie theaters as a special feature...if you're a Baby Boomer, you remember? Well, think of this as a cliffhanger, a thousand times removed and more sophisticated and improved. I can almost guarantee that after watching one episode, you'll be hooked and that you'll wait with bated breath for the next one...just like we used to do as kids in the theater for serials, like "The Adventures of Captain Marvel"...and so many others. The exchange that begins this review pretty much encapsulates the plot of this serial. Carrie Mathison, is a smart, driven CIA agent who's been told by a highly reliable source that an American POW in Iraq has been turned by the terrorists. She puts no stock in it at the time, but when Marine, Nicholas Brody, is rescued after spending 8 years as a POW, she tells her mentor and superior, Saul Berenson...and the plot, as they say, thickens from there. Claire Danes as Carrie, delivers her most powerful performance on film...my opinion; and the fact she plays a smart driven CIA agent, who also has a mental illness, just adds to the power of her performance. Damien Lewis, except for "Band of Brothers", also delivers his best performance on film...again my opinion. The third powerful performance is Mandy Patinken, as Saul Berenson, and believe me, his performance is just as riveting as the other two. There are of course many other support players who contribute greatly to the quality of this series, like Morena Baccarin as Jessica Brody, Nicholas Brody's wife; and David Harewood as David Estes, the director of the CIA's Counterterrorism Center. Can't recommend this series too highly...it is a powerful piece of TV programming!
10 people found this helpful

Abhik R. RoyReviewed in the United States on October 28, 2013
4.0 out of 5 stars
One of the best shows ever
Verified purchase
At the time of this writing, Homeland is about halfway through its third season. And by far, the first season is the best (but seasons 2 and 3 are good as well). My wife and I accidentally selected this series On Demand through our cable and it has been an incredible mistake. It hooks you from the first episode all the way through the end. The blu-ray itself is pretty good. It has some extras that goes into the plot and storyline as well as some character descriptions. My only complaint (and for me this is the reason for 4 stars) is that the set doesn't come with digital copies like HBO shows do. Now this won't make a difference for many of you, but I love having digital copies in my iTunes account. However, obviously it didn't keep me from buying the first season (as a gift to someone who doesn't care about digital copies) but it did keep me from giving the set 5 stars. I am hoping that Showtime re-releases these sets with digital copies. After that, I'll buy them for my collection.
See all reviews
Back to top
Get to Know Us
Make Money with Us
Amazon Payment Products
Let Us Help You
EnglishChoose a language for shopping. United StatesChoose a country/region for shopping.
© 1996-2021, Amazon.com, Inc. or its affiliates