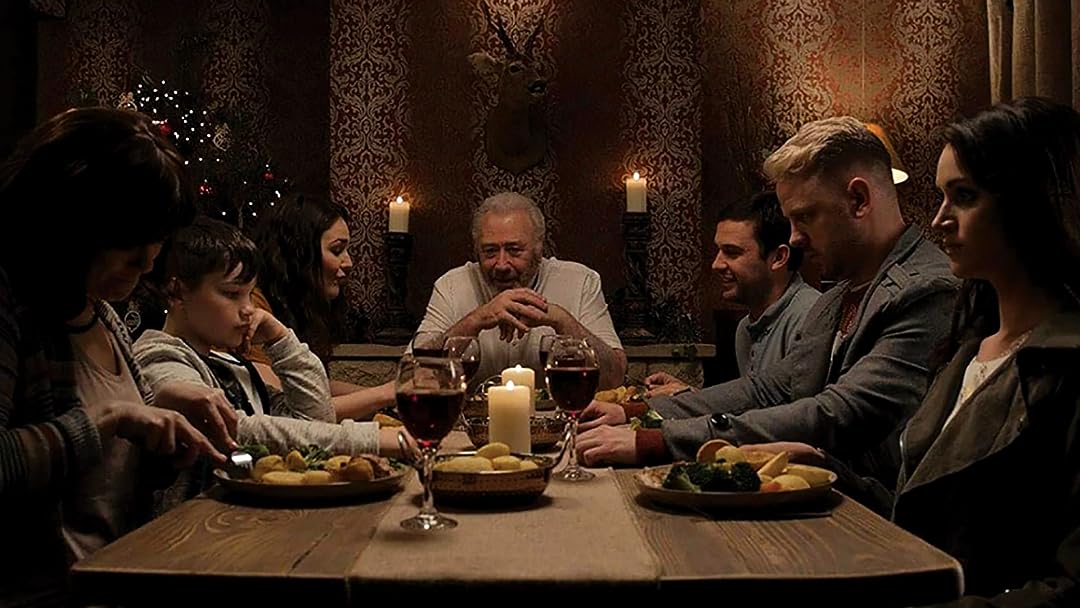 (283)
4.31 h 28 min202018+
A father with a dark secret unknowingly invites a demonic entity, disguised as his neighbors, into his home to enjoy Christmas dinner with his family.

Jamie AdamsReviewed in the United States on October 3, 2020
5.0 out of 5 stars
Different take on possession
Verified purchase
My wife and I watched this movie together and honestly for a minimal budget movie, it was quite good. There are some downright shocking scenes that were done very well if you're into horror. This movie is filled with tons of tension, anxiety, and some gore. The acting was great and you could see and feel the emotions the characters were going through. The cinematography was also done really well. If you go into this movie with an open mind and knowing this isn't a huge massive production, you should enjoy it.
13 people found this helpful

Len StonerReviewed in the United States on March 7, 2021
1.0 out of 5 stars
Only Gore, No Real Plot
Verified purchase
If all you like from a movie is gore, this is ok for you. This is one of those movies with a plot that should be in better hands. It's a cross between the horrible Skyline movie and even worse Friday 13/Halloween/ElmSt. This movie is only created to appease people who want nothing but to see someone's brains bashed in. The plot isn't even necessary. Because there's no real explanation of why suddenly beings are invading the planet or coming from hell, or where ever it was that they were trapped in. For something supposedly supernatural, these beings have little imagination or any common sense. If you follow the movie, you're supposed to believe that fracking somehow released these things. As though demons would come from a physical place. Yeah, this one will win an Oscar for sure!
7 people found this helpful

BrettReviewed in the United States on November 25, 2020
2.0 out of 5 stars
Mediocre at Best
Verified purchase
I looked at a lot of reviews before watching this and they made it sound a lot more watchable than it actually was.
It's not the worst movie you'll ever see, but it wasn't good. Some of the early parts are way too slow and I found myself skipping over some of the dialogue out of boredom. It's obviously meant to build up some dread, but it just didn't work well.

There were some interesting ideas that might have worked better if you cared at all what happened to any of the people involved.

There was one pretty gory scene, but not much else. Maybe a couple attempts at jump scares, but I wouldn't describe it as scary.

If I could go back in time about 90 minutes, I'd tell myself to pass on this one.

CallahanReviewed in the United States on October 15, 2020
5.0 out of 5 stars
This movie is a combined Texas Chainsaw/Hostel all in one fantastic feature film...
Verified purchase
I thought I've seen it all when it comes too horror films but this is in a category all by itself when it comes to darkened gore let me tell you. The scene where the mother at dinner table to family gives her heart warming speech about remission (you really get hooked in her speech and feel for her). Then the outcome is a combined punch in the face by: JASON/LEATHERFACE of destruction for the most Gore scene of 2020 hands down, GENIUS directors but ending could of had a little more thought put into it as it seemed rushed. Standing Ovation!
7 people found this helpful

A.BinkleyReviewed in the United States on March 15, 2021
2.0 out of 5 stars
Some good atmosphere but ultimately unsatisfying
Verified purchase
There were some good creepy moments in this movie, some shocking gore, and the effects were decent, I don't think I've seen light pouring out of someone's mouth like that before. But frankly there were a LOT of heartfelt moments of characters talking to each other about things that I'm assuming were supposed to pull on my heart strings. Those scenes really slowed down the movie. Given the balls to the wall style of Gore in some of the scenes and the atmosphere in some others you'd think they were going for a straightforward horror slasher but then they keep hitting you over the head with all this allegory about God and the fallen angels and feeding you bland dialogue about how much these people love each other... I mean if that kind of stuff is what you want to see then you probably don't want to see someone get their head caved in. If you want to see someone get their head caved in then you probably aren't up for the emotional banter. Pick one: touchy-feely or ultraviolence, they don't really go together. I'd say this is a two and a half star film overall but since Amazon doesn't allow half stars I'm rounding down due to nothing more than my disappointment in the end.
3 people found this helpful

BryanReviewed in the United States on October 4, 2020
5.0 out of 5 stars
Very solid horror movie.
Verified purchase
I really liked this movie. Dipped into a lot of different types of horror movies:possesion, slasher, thriller. I would definitely recommend it. I don't want to say too much and give away the plot
10 people found this helpful

The DadReviewed in the United States on September 1, 2021
1.0 out of 5 stars
Good thing we can shoot these demons
Verified purchase
This movie's theme (seeks to?) validates and vindicates right-wing gun lovers' insistence on having a pistol handy with a round chambered at all times. Seriously, though, if you see someone carry a hammer to your dinner table, would you really ignore it? Come on. The people in this film were such wimps it was hard watching them. If you refuse to defend the people you love, how can you believe that you love them? A solitary double barrel shotgun and a hammer allow a demonically possessed couple to murder and torture an entire family at Christmas dinner? Screw this movie. I feel this is incredibly contrived propaganda by people who have rejected logic and sense and this is their agrument to defend that. Well, it's a poor argument, it fails, and so does this movie. the acting is not bad, but nowhere good enough to overcomr the screenplay [or shall I say LACK of one?] The plot is poorly formed, expressed, and completely unresolved. The ending isn't an ending. To say it's a cliffhanger is to say showing an extreme closeup of random tiretracks on an entrance ramp of a freeway that eventually merges into a route that reaches a cliff is a documentary. This movie is aggressively terrible. It's like they didn't want to just make a bad movie, they wanted to trick people into watching an entire bad movie as a cruel joke aimed at audiences.
Show this movie on Christmas to guests you don't want hagning around, I guess.
Otherwise, it's one for the Blockbuster Movie Night specials bin. If you can't understand that, you may actually like this movie. You may have even helped to make it.
2 people found this helpful

ktReviewed in the United States on October 19, 2020
2.0 out of 5 stars
Couldn't make it through
Verified purchase
I got board in the middle somewhere I can't even tell you what this movie was about but I get through the whole thing horror movies should keep you on the edge of your seat the whole time this one did not pay out.
6 people found this helpful
See all reviews
Back to top
Get to Know Us
Make Money with Us
Amazon Payment Products
Let Us Help You
EnglishChoose a language for shopping. United StatesChoose a country/region for shopping.
© 1996-2021, Amazon.com, Inc. or its affiliates