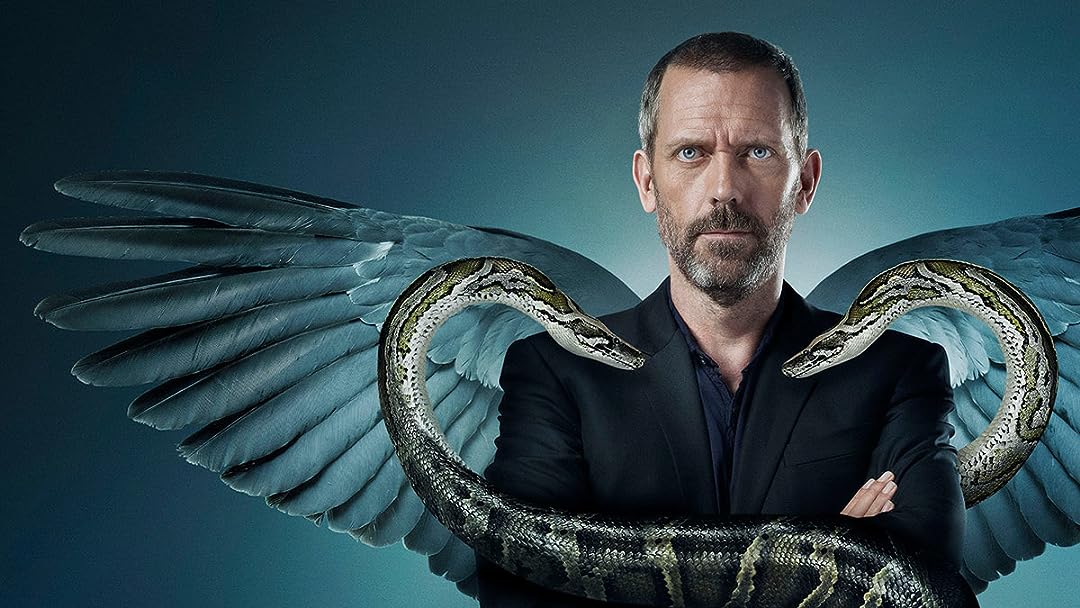 markReviewed in the United States on August 22, 2022
4.0 out of 5 stars
Good show
Verified purchase
I was actually getting a bit tired of the series but I thought I would try one more season. I have only watched the first episode but it was very Intriguing. Hope I like the rest of them.

Christopher BarrettReviewed in the United States on September 15, 2010
4.0 out of 5 stars
Better than season 4, not as good as 5
Verified purchase
First let me say that I am a huge fan of this show and especially Hugh Laurie (loved Jeeves & Wooster). I think he is one of the best actors on television and is the reason why this show is such a hit.

Here are my insights: the first episode is brilliant! House in the asylum to get off the pain killers and deal with the hallucinations. Now, it is great but is in no way based on any fragment of reality. This is television, and one must understand the nature of artistic license. Yes they make you stick your tongue out after taking your medicine to make sure you swallowed it. Yes they escort people to phones and monitor patients around the clock. Yes they have alarms on most doors. No, House would not have been able to drive out (their would undoubtedly be a gate and guard). But the episode is not about the inner workings of an asylum, but about House progressing as a character.

Now once the show gets back on track is where it falls short. Season 5 had its ups and downs but overall had good drama and good medical mysteries. It seems they are bored with the interesting yet realistic cases from before and coming up with crazier and crazier story lines. Still entertaining.

What I don't like is how Wilson takes a backseat in this season. Like Murray in Flight of the Conchords, Wilson is the glue that holds the show together. Where seasons 1 and 2 excelled was in the play between House, Wilson, and Cuddy. Now there is a relationship starting, and it seems to be going the Grey's Anatomy direction.

Still the cases are interesting, and they don't have the horrid American Idol type competition for the 'America's next top Princeton Plainsborough Teaching Hospital Diagnostic Medicine Department Fellowships' like season 4 (God that was awful); and the surprise death (and terrible episode) at the end of season 4. I am also happy that we got rid of one annoying character in season 5 and another in season 6 (though this character does make some reappearances). So three main characters out in 6 seasons... not too bad (definitely not as screwy as ER got).

Olivia Wilde is brilliant as always, Omar Epps is good, but not as brilliant as he was in seasons 1-3. I do like that Chase gets into the action. He is a rather enjoyable character to watch. He has some issues in this season and really develops as a character.

The show is still great, but it needs to close out soon. I hope for the integrity of the show they end at season 7. It is losing steam and I don't want it to end up like ER!

In my opinion seasons 1-3 are the best and rate about equal to me, then 5, then 6, then a big step down to 4 (a whole slew of unimportant, uninteresting characters and cases).

SACampReviewed in the United States on May 22, 2022
4.0 out of 5 stars
Blue rays in good condition.
Verified purchase
Interesting plot lines.
One person found this helpful

Sven PerscheidReviewed in the United States on September 26, 2010
5.0 out of 5 stars
The series founds its's balance on the highest level
Verified purchase
The medical always stood in the middle of the acting.
Cases got more and more complicated and House, the unique genius finally solve the puzzle.
This was so good, that a real doctor from a university is using the House cases to teach students in diagnostic medicine.
He said, that even he as an experienced doctor need to look up some details in medicine library.
All is accurate. Only a little dramatic is added in finding the solution.
So much about the quality of medicine of the series.

This is not changing in the actual 6. season.
It is getting more believable, because not all patients could be saved.
But this fits in perfectly. It is not something like "OK, this must happen one time."
Compliments to the authors.
The medicine could not be raised to a new level. It was always on the highest level.
But the personalities and interaction could still be developed. And this room was used perfectly.
House started in the mental clinic, getting rid of his illusions and addiction.
Another play of House? No. He found a smart counterpart in the head of this clinic, actually convincing him to go through it, facing his problems.
Brilliant acting and interesting interaction.
Back on work the new personal interaction take shape.
House is living together with Wilson and you see a real friendship. But House is not selling his soul. He is only using his abilities in a creative, not destructive way. Really fun to watch.
The medicine cases getting deeper, focussing also on the human behind.
A highlight is an african dictator, played perfectly by James Earl Jones, putting Chase is a serious personal dilemma.
He know he should treat someone who is guilty of genocide.
Every character is gaining. You get to know them better, watch them growing personally. Not a minute boring.
The "competition" is won by House. But in a photo finish from my point of view.
Until at the final episode House make the biggest jump. Best episode I ever saw. No telling: Watch it!

Every episode has something: Drama, fun, interesting background, interesting medicine cases. I just start over and watching them all again!

Best season? Easily said, but only true if you know the other seasons too.
Clear recommendation.
2 people found this helpful

Matt KratzReviewed in the United States on December 4, 2021
4.0 out of 5 stars
Great show
Verified purchase
My favorite episode from this set was The Tyrant. It has a bunch of other good episodes too, and I was glad I got it. You will love the set!

M-SquaredReviewed in the United States on October 8, 2010
4.0 out of 5 stars
Starts GREAT -- Might Disappoint at the End
Verified purchase
As a House fan, I was anxious to receive the latest in the House DVD series. Season 6 starts with the powerful 2-hour episode in which House has committed himself to a psychiatric hospital. This episode is one of the best pieces I have ever seen on television. Powerful performances by Lin-Manuel Miranda (creator of the Broadway hit "In The Heights"), Andre Braugher ("Men of a Certain Age"), and the rest of the phenomenal cast, are haunting and true to life. This is the only episode where the regular House cast members are not present, except for a brief scene where Robert Sean Leonard appears.

In this episode, Hugh Laurie's acting range is displayed from the typical House behavior, to an almost breathtaking passion, to the inner torment of the character. And, for the first time, the glimmer of hope. He meets his match in Dr. Nolan (Braugher).

The rest of the season shows how House uses, and eventually distorts, the insights he gains from his admission to the hospital. The season, to me, becomes more bogged down with relationships than medical drama. Of course it ends with the ambiguous "will they or won't they?" in the relationship between House and Cuddy.

This DVD also hypes "A New Short Featuring Hugh Laurie." SPOILER ALERT: I was disappointed to see that it is a wordless improv of Laurie as House when he first enters the hospital. In and of itself, the piece is good, again showcasing Laurie's talents, but is not anything "New" outside of the House context. It was shot at the end of Season 5, and was intended to give the writers some insight as to how to approach Season 6.

On Disc One, however, is a marvelous behind the scenes documentary on the making of the first episode. I truly enjoyed this bonus feature.

Still, for any fan of House, MD, this DVD will add to your video library.
One person found this helpful

Blue LeafReviewed in the United States on April 28, 2012
4.0 out of 5 stars
Bad disc packaging/Solid 6th Season
Verified purchase
HOUSE, MD is my favorite television program of the past 10 yrs. I have to say that my poor review has nothing to do with the content of Season 6. My problem is with the packaging of the five discs that make up the Blu-Ray edition of the dvd collection. I have Season 7 and they have changed the packaging to make it easier to get the discs out of the case. I have a feeling they must have had a lot of complaints about how the packaging in Season 6 could cause the purchaser to bend the top discs, which would be disc 1 and 3. I carefully got out Disc 1 but when I tried to get Disc 3 out of the container I bent it very slightly yet enough to make it unusable. It was my mistake and since my printer is broken I don't know how to return it. I am just warning people that although it WAS MY FAULT I think you should know that it is very difficult to remove two of the five discs from the box. It was just very disappointing and it makes me feel like I don't want to watch anymore. Maybe other people will have solutions to this problem which could be helpful. Hopefully this is true because, at some point, I would like to buy another set; possibly some time in the distant future when I have overcome the "trauma of the bent HOUSE disc: Season 6".
One person found this helpful

TravisReviewed in the United States on January 30, 2011
5.0 out of 5 stars
Season: Most Daring Yet; DVD: Satisfying
Verified purchase
This is my personal favorite season of "House" yet. Unlike the previous season, the writing team seemed a lot more focused on season-long themes and arcs while still managing to step outside the box. Season Six might best be characterized as "the concept episode season" as its highlights include the double-length season premiere chronicling House's time in an institution; a pair of "a day in the life of" episodes that both work well; and "Lockdown" (separating and isolating our characters during a hospital lockdown, giving them a chance to interact in ways outside their normal situations).

Crohn's Bonus: One of the patients is diagnosed with "extra intestinal" Crohn's disease!

The House/Wilson relationship is in full bromance form throughout this season, and the chemistry between Hugh Laurie and Robert Sean Leonard is one of the most compelling elements of the series. Bonus: someone had the inspiration to cast Andre Braugher as House's therapist, and that was a stroke of genius. Braugher is one of the few with the gravitas to hold the screen against Laurie, without taking you out of the episode.

Regarding the DVD release, there are four commentary tracks (including one on the aforementioned double-length opener) and a handful of brief, but at least interesting, featurettes. I haven't played any of the commentaries yet, but I felt more rewarded by the featurettes here than I did by those on the Season Five box. Also, and it's a little thing, but I really dig the teal layout of the package design. It really pops on the shelf next to the other seasons.
One person found this helpful
See all reviews
Back to top
Get to Know Us
Make Money with Us
Amazon Payment Products
Let Us Help You
EnglishChoose a language for shopping. United StatesChoose a country/region for shopping.
© 1996-2022, Amazon.com, Inc. or its affiliates