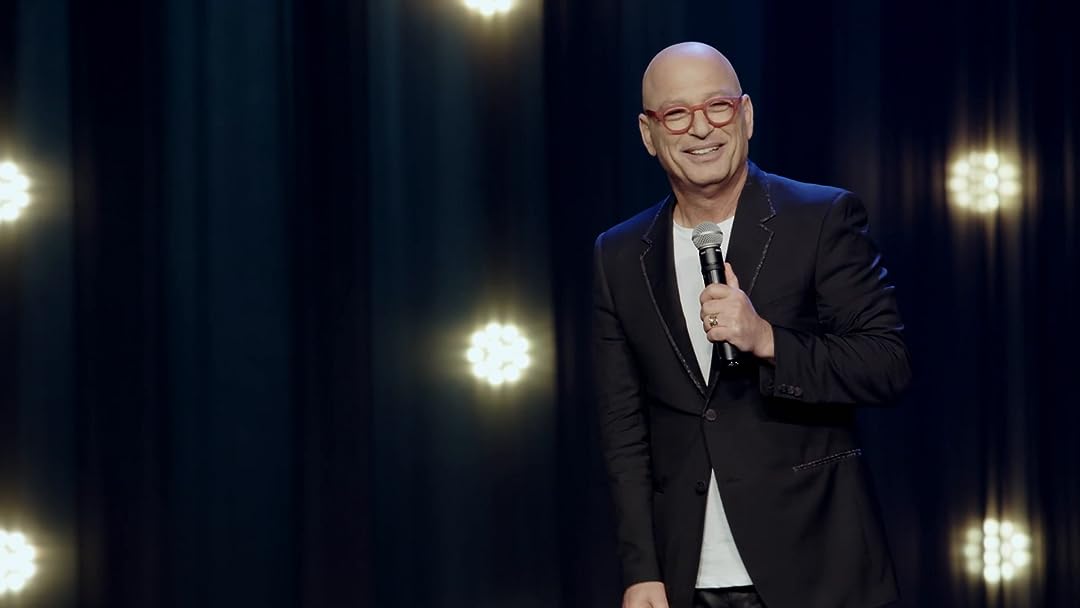 (62)
6.956min201916+
Howie Mandel presents Howie Mandel at the Howie Mandel Comedy Club is Howie's first stand-up comedy special in over 20 years! After being a mainstay on the stand-up comedy circuit for 40 years, Howie takes the stage at the comedy club that bears his name in Atlantic City, NJ. 8 out of 10 critics agree.

JoshReviewed in the United States on September 26, 2021
5.0 out of 5 stars
It's a real comedy special
Verified purchase
If you're an actual fan of Howie Mandel since the 70s, and not a fair weather fan that only likes Howie from all his family entertainment that wants to censor the world of anything else because it's "so bad", then you'll probably like this. Howie is a silly guy who likes to mess with people and he talks like a real person when he does stand up so he says real words. Real words that you wont like if you're into censoring people and think it's ok people get banned on social platforms for having an opinion you don't like.

More importantly than that I recommend people who actually know Howie's stand up to read the reviews to this special because I find it hilarious how many people hate this special. They are such idiots. these are probably the same people that were surprised when Bob Saget finally put out a comedy special on HBO not realizing how dirty Bob Saget's stand up is.
The best part to me is when people pretend to know, so they act like it used to be ok, but now it's not. Now Howie is just jumping on the band wagon. I'm not sure there is a band wagon but if there was these people think Howie is new to it and he just jumped on it now. In reality they didn't know what his stand up was like so when they watched it they were caught off guard and surprised that it's not superficial and he talks like a dirty old man (Bob Saget- although Howie is not a stranger to adult words but he's not quite as dirty as Bob Saget is which is also pretty funny to me). There's one guy in the reviews here that thinks Howie "...just started doing what other comedians do and started doing dirty material." This is legitimately hilarious stuff to read.
Howie Mandel has been a stand up for a long time. If you think he just started talking like a a normal human being you've never watched him do stand up before.
The comedy special is great if you actually like Howie. He's a silly guy- like he's always been. But more importantly if you're awake and can see the fallacy in what the drones don't like- read these reviews. The less the stars the more hilarious it gets.
After you watch the stand up maybe take a couple minutes to read really smart reviews. It's... incredible.

Tell Me A StoryReviewed in the United States on January 9, 2022
3.0 out of 5 stars
HOWIE HASN'T CHANGED. His comedy is more appealing to married and over 40 crowd.
Verified purchase
When rating comedy I watch, I ask if I had paid to see this, would I want my money back?
In this instance, I probably wouldn't want my money back, unless it was over $75 (but that's arbitrary).

I used to think Howie Mandel was one of the funniest men alive. His comedy is very accessible because he continues to talk about people and behaviors that nearly all can relate to personally. His germ phobia reminds me of my OCD ex. One of the stories was pretty funny.

About twenty minutes was devoted to pretty graphic material regarding sexual practices for the sole practitioner, which I seriously could have done without. I would be embarrassed if I were on a date with someone I didn't know well. For me, the rest of it was better than most comedic presentations.

I do agree with some of the critiques among the one star reviews. He primarily appeals to the over 40 crowd and there is nothing about current day novelties, but for me, I don't need to hear about cellphone courtesy or weird roommates. Additionally it kept my attention. I watched it all in one sitting, which is more than I can say for most comedy shows on this platform.

I definitely laughed throughout it but nothing memorable happened. In a few days, I probably will still think it was good but won't remember punchlines.

CharlesReviewed in the United States on March 6, 2022
2.0 out of 5 stars
Pointless swearing takes away from the comedy
Verified purchase
So, I will preface this by saying I know nothing of Howie's comedy from 20 plus years ago. I know very little about him other than he voiced Bobby from Bobby's world, has done AGT, and Deal or No Deal. All I've heard is that he was a very good comedian. Well, not really. It was ok. But all the swearing, cussing, just really wasn't needed to be funny. Very little of his routine got me to laugh and none of it was from the cursing. I listened to the whole show more out of disbelief at just how bad the overall comedy was. I was not impressed. Honestly, most of the comedians on AGT I found to be much more funny.

MikhailReviewed in the United States on May 23, 2021
3.0 out of 5 stars
He's Lost Potential Audience
Verified purchase
I like Howie Mandel. His spontaniety and hyper cadence is always funny. The loss of two stars is pussy and butt humor and bad language. I am no square but there is too much strange sexual material like objects needing to be removed from butts. Its lame. Its not edgy humor. I have to give him a two and a half here for material but he is a 5 in his use of time and speed. He wasn't going to have any real hecklers so despite his skills it was not a stretch and his material is not new or relevant. He is however, intrinsically funny.

Deaf GypsyReviewed in the United States on November 21, 2021
3.0 out of 5 stars
Wow - looks like he's a misogynist
Verified purchase
He seems to have become cynical and a real misogynist... good thing it's his last "special" stand up. You need to retire Howie.

K. BradshawReviewed in the United States on July 18, 2021
3.0 out of 5 stars
It was Funny Sort of... It was Howie
Verified purchase
I liked it. He spent half the time talking and interacting with the audience versus doing topics. He's funny...
I was hoping for more. He's still a comic genius on his ability to improvise the subject from a previous joke into the new one.

DenisaHReviewed in the United States on December 29, 2021
5.0 out of 5 stars
Robin Williams on Xanax
Verified purchase
I have been a fan of Howie ever since St. Elsewhere. He had me laughing harder than I have in a long time. My first thought was "he's like Robin Wiliams", but not as hyper" Then it hit me. Robin Williams on Xanax.
See all reviews
Back to top
Get to Know Us
Make Money with Us
Amazon Payment Products
Let Us Help You
EnglishChoose a language for shopping. United StatesChoose a country/region for shopping.
© 1996-2022, Amazon.com, Inc. or its affiliates