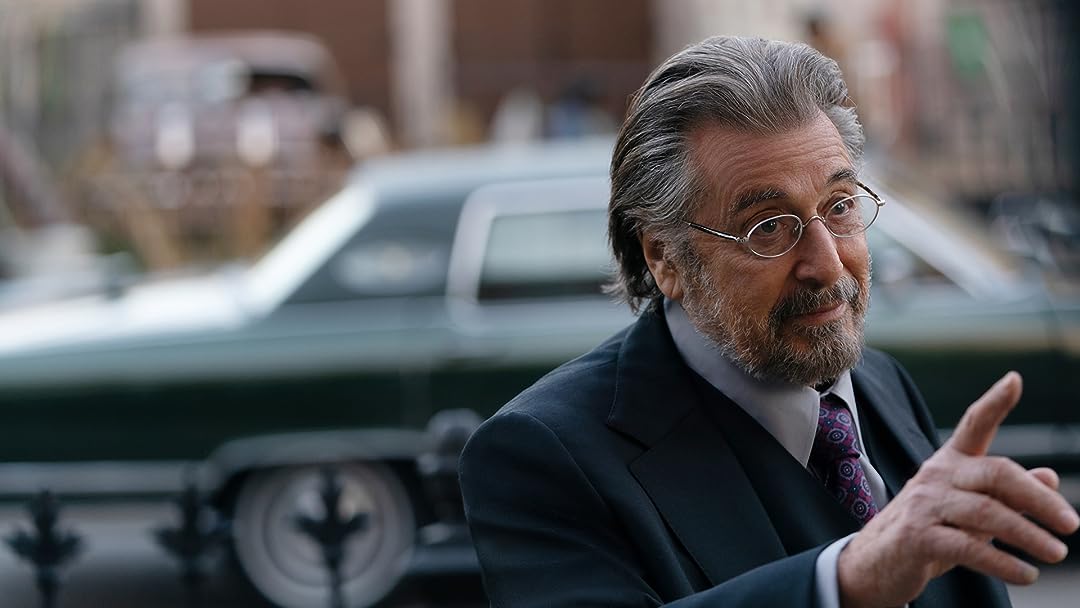 Season 1
(7,653)
7.22020X-RayHDRUHD18+
Inspired by true events, HUNTERS follows a diverse band of Nazi Hunters in 1977 New York City who discover that hundreds of escaped Nazis are living in America. And so, they do what any bad-ass vigilante squad would do: they set out on a bloody quest for revenge and justice. But they soon discover a far-reaching conspiracy and must race against time to thwart the Nazis’ new genocidal plans.

TSReviewed in the United States on February 21, 2020
1.0 out of 5 stars
Ridiculous Rip Off of Quentin Tarantino. Fears to Name the Real Threat to the Jews of the World
“Hunters” is a fictional tale set in the late 1970s in New York City about an inter-racial inter-faith inter-generational team that hunts down Nazis who managed to infiltrate the United States after World War II. Although there really were people hunting Nazis then, with great success, and bringing them to actual justice before courts in Germany and Israel and elsewhere, that wasn’t enough for those who created this series. They decided to create a sassy, stylish MOT SCHKVAD (Yiddish MOD SQUAD), with overlays of blatant rip offs of Quentin Tarantino’s style of idealized nostalgia for the 70s, complete with snippets of the deeper tunes of the day.

The villains are horribly two dimensional, just as the heroes are horribly hip. Every good revenge tale needs a dreadful bogeyman, and God knows the Jews had a horrible bogeyman in the Nazis, right up until 1945, when they were crushed. This series ignores the fact that since then there has been no meaningful Nazi movement, in the sense that they could accomplish more than prancing around in silly uniforms while holding rallies in Jewish parts of various cities (picture the “Illinois Nazis” of Blues Brothers). Instead, the series makes up an organized, sophisticated, ruthless and effective group of people who are seeking out Jews to murder, while infiltrating deep into our government. The sad thing is that they could have been historically accurate and told a story of real people who even in the 1970s were developing sophisticated networks and plansto rid the world of the Jews; unfortunately, those people (who still operate all around the world today) belong to the religion that dare not speak its name in the media, so they had to make the villains, well, white.

It is because of the poorly executed stylizing of the heroes, and the historically inaccurate nature of the villains, that this series fails. They tried to create a mixture of the Mossad, the Mod Squad, and Inglorious Basterds. While Quentin Tarantino pulled it off, mixing Jewish hunters taking down Nazis with brutal efficiency, and adding the fantasy element of getting Hitler in the bargain, all the while indulging in 70s nostalgia by setting his 1943 movie to 1970s music, “Hunters” fails because its writers and directors lack Tarantino’s originality and genuine love for nostalgia. They chose to mimick him, rather than emulate him.

Al Pacino does a good job in his role as the Jewish Bruce Wayne funding and leading the endeavor. The other actors are hobbled by their too-hip characters, and by the implausibility of the whole story.

Ultimately the series fails because we all know who it was that was attacking and killing Jews in the 1970s; they’re the same folks attacking and killing Jews in America and around the world today. Their absence screams of cowardice, and you can’t pull off a righteous tale of courageous revenge when your primary decision about the identity of the villain was born of cowardice.

Oh, and don’t for a moment think that one of the heroes wasn’t made to be gay, because, well, just because that’s required in every single series. To top it off, they also made that character a "devout Catholic." They've always got to get their digs in, don't they? Stuff like this just ruins the series.

HollyHReviewed in the United States on February 21, 2020
1.0 out of 5 stars
More “reimagined” historically inaccurate Amazon pc programming
This show is a travesty. To replace the honorable work of the real Nazi hunters-Jews-with a multi-cultural, pc-ready cast that every streaming service feels required to do these days is an insult to anyone actually touched by the Holocaust & Fascist Germany. Once again Amazon demonstrates how they love to rewrite history to appear “cool” and these show runners bring their own agenda to a story that deserves so much better. A little bit of truth goes a long way-too bad this fictional account doesn’t deliver.
1683 people found this helpful

Zach DumontReviewed in the United States on February 21, 2020
5.0 out of 5 stars
The creators and actors are the best qualified to make this show.
Like many, I was concerned about a Tarantino-style revenge fantasy about an atrocity, made by comedians with a cartoon understanding of what happened during the Holocaust. Reading the bios and history of actors, directors, show creators, and producers settled that worry. I also think of recent polls demonstrating little knowledge or curiosity among young people about the Holocaust. To older adults it may sometimes feel like a sick, tired meme, romancing a horror, but we're on the edge of repeating history some places. The rhetoric is starting. The people who'll fight that battle need to know just how banal it was, how public, and how evil. That a charismatic, entertaining, bumbling, or talented Nazi isn't a harmless diversion--they're a freaking Nazi. That moral relativism doesn't always apply. That while the real blessing would be Never Again, a world where this show would be unnecessary, we don’t live there yet.

I enjoyed the diverse cast for a simple reason: Some people forget (or never knew) that Nazis didn’t just target Jews for extermination. They also killed or enslaved people of color and LGBT+ people. Hitler demonized them as plague-ridden animals and degenerates, pollutants of the Master Race he was trying to build. If this show’s cast represents not only Jews but all the Holocaust’s victims, it’s about time.
1226 people found this helpful

TQReviewed in the United States on February 21, 2020
1.0 out of 5 stars
Not very good...
First I'll just say this is very serious subject matter and I find it unsettling how they try to do a "poor mans" pulp fiction treatment to it.

Characters are characters of themselves... horribly cliche' they seem like forced Hollywood stereotypes.

But main problem for me was the treatment of the subject matter. Just feels wrong to joke around about it. That's all.
1104 people found this helpful

Monica Amor EdwardsReviewed in the United States on February 21, 2020
5.0 out of 5 stars
Worth the watch
I am scared for the people treating this like a documentary. Calm down people. It’s a FICTION TV SERIES. Good guys beating up the bad guys. Tale as old as time. For those upset about it being “too hip” or “too flashy” or not original enough...Get over yourselves! The subject matter is serious, but it definitely has a dark comic-book vibe to it (quite a few Batman references). As for the people asking “why does there always have to be a gay character” ? Well, in 1970’s being gay was not readily and openly accepted. It was a perfect tool to use to blackmail/threaten/ defame a person. When you have a squeaky clean FBI agent who’s deepest darkest secret is her girlfriend, it works. Her storyline is way more than a superfluous homosexual relationship. I am more than halfway through and can’t wait to finish it!
861 people found this helpful

PollyAnna2Reviewed in the United States on February 22, 2020
5.0 out of 5 stars
Pssst... it’s not a documentary!!
This is not a documentary! It is loosely based on actual Nazi hunters. I am appalled by all of the one star reviews claiming that killing nazis is somehow a bad thing.
If you somehow think this is anti-white, racist propaganda, you’re clearly wearing your tin foil hat, too tightly.
I also don’t feel that this, in any way, “makes light” of the horrors of the Holocaust. I actually think the details, in the scenes, from the camps were done with great care. Detailing the dehumanization these poor souls were made to endure.
As for the over the top, and peppering of humor, injected throughout is (somewhat, sadly) necessary, to keep people interested and entertained. In a world where attention spans are very short, and everyone biting for the next thing to be complete outraged, or offended by, I think it’s safe to say, nothing is ever going to make everyone happy.
Oh, and one more thing, there are gay people in the world, they work, they go to school, they are your neighbors, and family members; and spoiler alert, they have been around, since the beginning of time. Homosexuality even exists in other species, so please, get-over-it. Love is Love. And it is Always greater than your hate.
491 people found this helpful

Mark in TexasReviewed in the United States on February 21, 2020
1.0 out of 5 stars
Dangerously cartoonized depiction of the Holocaust, with splattergore
Appallingly exploits the horrors of the Holocaust, interspersing flashbacks of it with Tarantino-esque cartoonish violence to create a sadistic and emotionally hollow revenge fantasy. The Nazis, including the SS-TV in the flashbacks, are depicted as over-the-top gleeful sadists like the Dentist in Little Shop of Horrors. And like the first scene of E1 where the guy casually eliminates his whole family. I think this is dangerous. Portraying Nazis as inhuman monsters puts too comfortable a difference between them and us, too easy to convince ourselves they were an aberration that the rest of us aren't incapable of being. These were men who, convinced that what they were doing was in the best interests of their country, did the most heinous things in a detached systematic matter, while going home every night and often being loving husbands and fathers. There are two really good films that speak to this, the first is Conspiracy, with Kenneth Branaugh and Stanley Tucci. Without showing a single execution, its depiction of the Wannsee Conference, where key Nazis planned the Final Solution as if they were hashing out the details of a corporate merger, is more chilling than anything shown in Schindler's List. And then there is the documentary "What Our Fathers Did: A Nazi Legacy," where two elderly men grapple with the dissonance between their memories of their fathers as loving parents, and the undeniable record they were high level participants in genocide.
371 people found this helpful
See all reviews
Back to top
Get to Know Us
Make Money with Us
Amazon Payment Products
Let Us Help You
EnglishChoose a language for shopping. United StatesChoose a country/region for shopping.
© 1996-2021, Amazon.com, Inc. or its affiliates