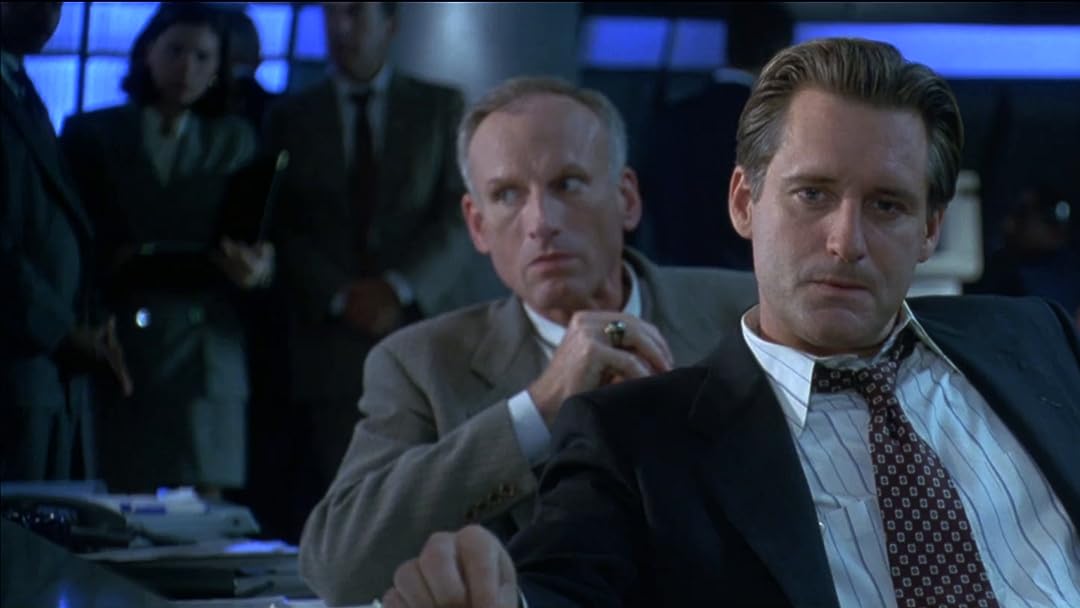 J. WestReviewed in the United States on April 9, 2020
5.0 out of 5 stars
"Now That's What I Call A Close Encounter!!!"
Verified purchase
I thought it was a perfect time to buy this on Blu-ray and Digital. The sound was way better. The storyline was great Science Fiction action film. Great roles and performances by Jeff Goldblum, Bill Pullman, Will Smith, Vivica A. Fox, Judd Hirsch, Brent Spiner, Randy Quaid, Mary McDonnell, Harry Connick Jr. & Adam Baldwin. Brent Spiner was this nerdy alien lover role, and I thought that was a great role for him. Will Smith was a great role as a father and fighter, and he had great funny lines. I love the role of Randy Quaid, a drunk and he got abducted by aliens to experiment him. And at the very end, it gives me chill that he says "Hello boys, I'm back!" to end his sacrifice to destroy the ship. I love that part. I would really recommend it. If you like Science Fiction films.
12 people found this helpful

ProfessorReviewed in the United States on September 27, 2019
4.0 out of 5 stars
Bad in so many ways, but entertaining
Verified purchase
passed this one up when it was released, even though everybody in the world was talking about it. The trailer for this film, which is almost as notorious as the film itself, was shown on the commercial breaks at the 1996 Super Bowl.

I finally got around to streaming it 24 years later, September 2019.

It's basically a cartoon, with cartoonish characters, a cartoonish plot, and cartoonish dialogue. I think the dialogue annoyed me the most. It's straight out of a comic book. The stellar cast (Will Smith, Jeff Goldblum, Bill Pullman, Judd Hirsch, Robert Loggia, et al) do their jobs well, keeping straight faces throughout.

Once you adjust to the fact that there isn't one iota of seriousness to this film, it is entertaining. Critics who panned it for being unrealistic just didn't get it. It's a teenage movie. It borrows from all the grade B outer space invader films of the 1950's, which were also aimed at teens, but it has big budget special effects instead of the laughable cheapo effects of the old 50's sci fi stuff.

I kind of miss those old movies: _The Day the Earth Stood Still_ , _Earth vs. the flying Saucers_, etc. I saw them all in reruns on TV back in the 60's. Maybe that's why I'm giving this absurd film a break.

The first really serious alien invasion film was, of course, Spielberg's _Close Encounters of the Third Kind_ in the 70's. _Independence Day_ doesn't even come close. Make some popcorn and accept it for what it is: mindless entertainment, with emphasis on "entertainment."

joel wingReviewed in the United States on January 17, 2021
3.0 out of 5 stars
Delivers on the aliens & big explosions even though there are all kinds of holes in the plot
Verified purchase
Aliens come to invade the Earth once again. The movie uses an ensemble cast to depict the different ways humans resisted. There’s President Whitmore (Bill Pullman) who tries to bring the governments of the world together. There’s David Levinson (Jeff Goldblum) an engineer who attempts to find a scientific solution to the alien threat. Russell Casse (Randy Quaid) is a drunk pilot who is brought back into the fight. Captain Hiller (Will Smith) is in the middle of the military response to the aliens. His girlfriend Jasmine (Vivica A. Fox) and the First Lady Marilyn Whitmore (Mary McDonnell) try to survive the aftermath.

There are some huge holes in the story such as putting Casse inside a jet fighter even though he’s a drunk and had no idea how the new technology worked. Even so, you don’t watch a big blockbuster film like this for the details! No, you just want to see the aliens and the big explosions and on that front Independence Day delivers.
C
6 people found this helpful

Phil GarReviewed in the United States on May 1, 2022
1.0 out of 5 stars
Being billed as a sci-fi movie is a complete overstatement.
Verified purchase
Poorly cast, even worse acting, corny. The basic story is good if it was an actual sci-fi movie. Just bad all around. It is a fantasy movie... that is fantastically, ridiculously, unrealistic, and simply impossible for the time period... from start to finish!
7 people found this helpful

Mike SReviewed in the United States on September 7, 2021
5.0 out of 5 stars
Forgot how great this movie was
Verified purchase
In the end this movie is about unity and, I guess, that it's sad that we need something catastrophic to get us all to stop judging each other and accept the differences so we can work together. It's such a great show and I forgot how much I truly love it and am inspired by its message. I just bought the digital version but now I know I need to get the BlueRay version, as well. I wish we had generals today that acted with bold but compassionate service as they did in this movie. Truly something we should aspire to.
4 people found this helpful

TurtleWinsReviewed in the United States on September 18, 2021
4.0 out of 5 stars
Entertaining and funny
Verified purchase
This isn't the kind of film that's going to win awards for writing or originality (or plausibility), but it's well acted, funny, and solidly entertaining. Will Smith and Jeff Goldblum are required viewing. I wish they would smoke cigars together in more movies. Judd Hirsch is endearing and Bill Pullman is everyman-presidential (can anyone squint like Pullman? Maybe Clint Eastwood? Nah.). Harvey Fierstein is delightful, if oddly under-utilized. The early part of the movie nearly got stolen by Harry Connick Jr. in a hilarious locker room scene. And, Star Trek fans, watch for a treat mid-film. I remember seeing this movie in the theater and the audience cheering when a certain Star Trek actor appeared. The only truly unfortunate aspect of the movie is the music. I've never heard more obvious, cliche music in a film. It adds a level of cringe to every scene. Oh well, still worth watching.
One person found this helpful

katjaneReviewed in the United States on June 3, 2016
5.0 out of 5 stars
One of the great sci-fi movies of our time
Verified purchase
I remember going to see this at the movies when it debuted, yes, on the fourth of July 1996. One of the great sci-fi movies of our time, Independence Day is a roller-coaster ride of a movie. Action, Adventure, Humor, Romance, you name it this movie has got it. Anyone that thinks this movie stinks does not deserve the honor of being a movie fan. It is an excellent and powerful ride of a movie. It's even better widescreen. his movie has it all action, romance, aliens, space ships, jet fighters, nuclear bombs and great special effects! the heck with writing - if you want writing go read a book. If you want thrills, spills and good fun then this is your movie.
Oh yes, the point that I feel this movie makes is that humans may not be the center of the universe (even though we think and act like we are) and if we keep blindly advertising our existance with radio waves etc. we just might attract a life form that is higher on the galactic food chain than we are and we had better be prepared!
14 people found this helpful

GottaDoSumptinReviewed in the United States on May 17, 2022
4.0 out of 5 stars
One of the Better Summer Blockbuster Movies of the Era
Verified purchase
Independence Day was released in 1996, 26 years ago. It still holds up; worth watching. The ensemble cast were at the top of their games in this piece – Will Smith, Bill Pullman, Jeff Goldblum, Mary McDonnell, Judd Hirsch, Margaret Colin, Randy Quaid, Robert Loggia, James Rebhorn, Harvey Fierstein, and Harry Connick. Even though I know what’s going to happen, the film still holds my attention.

Wikipedia says: “Considered a significant turning point in the history of the Hollywood blockbuster, ‘Independence Day’ was at the forefront of the large-scale disaster film and sci-fi resurgence of the mid-late 1990s.” I could have said it better.
See all reviews
Back to top
Get to Know Us
Make Money with Us
Amazon Payment Products
Let Us Help You
EnglishChoose a language for shopping. United StatesChoose a country/region for shopping.
© 1996-2022, Amazon.com, Inc. or its affiliates