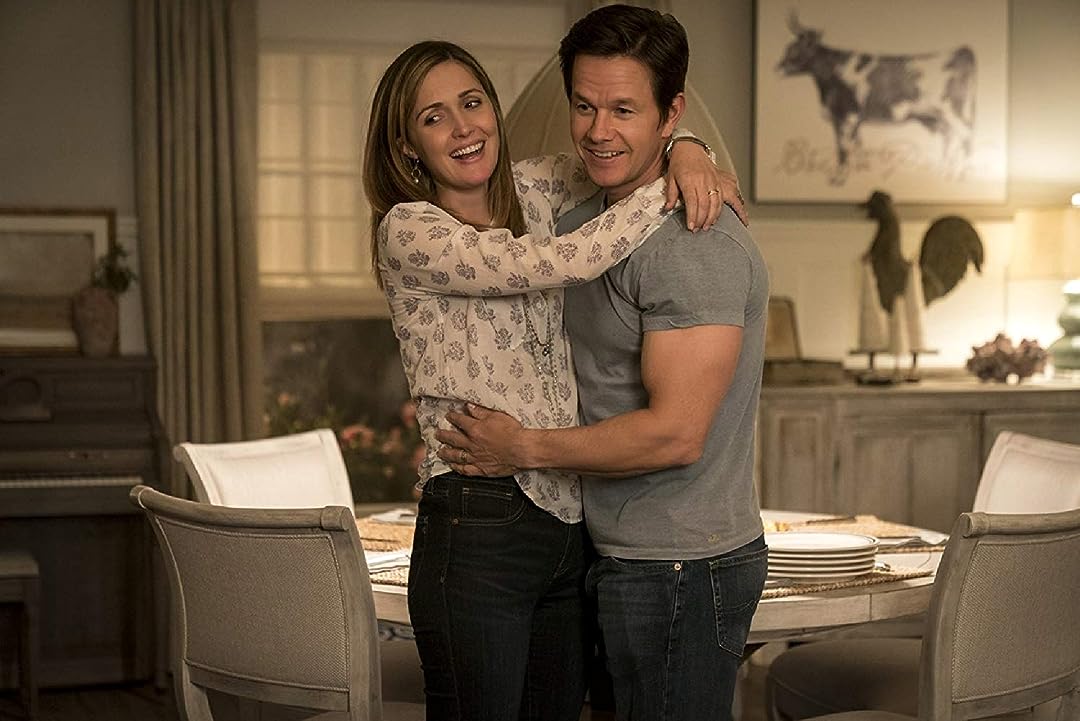 (15,009)
7.31 h 58 min2018X-RayPG-13
Pete (Mark Wahlberg) and Ellie (Rose Byrne) must learn the ropes of instant parenthood when they bring in three foster children. Inspired by a true story, discover this must see family comedy from the creators of Daddy's Home.

Watch with Paramount+
Start your subscription
Add to
Watchlist
By ordering or viewing, you agree to our Terms. Sold by Amazon.com Services LLC.
Write review

FaithReviewed in the United States on March 19, 2019
1.0 out of 5 stars
Disappointed with the language
Verified purchase
Love the story, hate the language...it says it is a film for the whole family...I am so disappointed that they use a lot of foul language including the f bomb more than once. How is that a family film? Very disappointed.
479 people found this helpful

Dan and Bonnie SchwartzReviewed in the United States on March 18, 2019
1.0 out of 5 stars
BEWARE Christians, don't watch this movie
Verified purchase
I would have rated this movie 0 if I could. I saw the previews of this movie while at the Theatre watching a Christian movie. I know many Christian families that do foster care and adoption. I made the mistakes of just assuming it was a Christian movie, but boy was I wrong! This movie has cursing through out the movie. This movie has a much bigger agenda to push besides adoption. This is a very liberal, worldly movie that goes against all of God's teaching.
419 people found this helpful

MReviewed in the United States on December 1, 2018
5.0 out of 5 stars
Favorite movie of the year!
I can't remember the last time I laughed so much! We LOVED this movie. They took a heavy subject and made a movie with so much heart and passion and humor. The actors were amazing--not just Wahlberg, Octavia Spencer, and Rose Byrne, but the kids were fantastic too. We found ourselves rooting for the characters, even while cringing and groaning over their actions. If you need a laugh, a smile, or just to take your mind off something, watch this!!! We walked out of the theater happier than when we walked in. That's what I call good entertainment.
272 people found this helpful

NatalieReviewed in the United States on March 10, 2019
1.0 out of 5 stars
unnecessary foul language
Verified purchase
Unfortunately after renting this movie for $5 we had to turn it off in first quarter of the movie due to the foul language. Too bad because it looks like a good story line.
206 people found this helpful

GsimsReviewed in the United States on February 28, 2019
5.0 out of 5 stars
Great movie!
Verified purchase
We are foster parents and this movie touched every base and emotion about what foster parents go through
203 people found this helpful

Carl SchultzReviewed in the United States on November 19, 2018
5.0 out of 5 stars
Instant Classic, and New Holiday Perennial
The laughter and tears come in roughly equal measure in “Instant Family,” but rarely where you think they’ll be.  While the picture eventually arrives more or less where you think it will, it rarely travels in the directions you expect.  In the process, “Instant Family” becomes a special picture indeed, not only an audience-pleasing family comedy, but also likely an entertainment classic as well as an instant holiday perennial.

Pete and Ellen are a childless couple in their early forties.  Partners in business and in marriage, in approximately that order, the couple purchase and renovate houses for sale to affluent families.  Having put off starting a family because each always felt the other wasn’t ready, when the couple purchases and begins to rehabilitate a home containing five bedrooms across the street from a playground, they begin to consider the possibility of foster parenting.

With a wry notion that they can bring a disadvantaged older child into their home and pretend they started earlier, the couple begins an eight-week orientation class in foster parenting, among other like-minded couples and individuals with their own motivations.  But when Ellen and Pete find themselves faced with the challenge of simultaneously hosting three young siblings with a tragic shared background, they quickly learn that parenting is not quite as simple as renovating homes.

Written by John Morris and Sean Anders, and based on the actual real-life experiences of writer and director Anders, “Instant Family” is one comedy that steps up to the plate and bats a grand slam home run in just about every possible way.  Despite its often maudlin subject matter, this picture is a sharply observant, perceptive and heartwarming comedic masterpiece from its first frame until its last. Never aiming for cheap laughs, “Instant Family” instead mines affectionate humor from believable characters in credible situations, and in the process produces the kind of satisfied laughter that usually only can be found in real life.

Led with virtuoso, heartfelt performances by Rose Byrne and Mark Wahlberg as Ellen and Pete, there are no slackers or small performances in this perfectly-cast picture.  Special standouts include the by-the-book Tig Notaro and plain-spoken Octavia Spencer as social workers who train the rookie foster parents and ease their transition into parenthood.  Notaro and Spencer work together like old pros, and their scenes together are a highlight in a picture filled with memorable moments.

Likewise the wonderful Margo Martindale as Wahlberg’s gregarious and sometimes overbearing mother, Iliza Shlesinger as another prospective foster parent, and Javier Ronceros and Rosemary Dominguez as a veteran adoptive couple who both inspire and challenge Byrne and Wahlberg.  Julie Hagerty and Michael O’Keefe as Byrne’s parents also figure prominently into what is likely the most side-splittingly funny Thanksgiving holiday family dinner ever captured on film.

But during a year filled with strong characterizations from young performers such as Isla Fisher in “Eighth Grade” and Amandla Stenberg in “The Hate U Give,” the real breakout star of “Instant Family” is 17-year-old Isabela Moner as Lizzy, the oldest of the trio of siblings who come to live with Pete and Ellen.  Far from being just a comedic foil for the antics of the other performers, Moner builds a full-blooded characterization as a child who’s seen so much of the sad part of life that she’s unable to recognize the good parts.

Opening in 3258 theaters across North America, “Instant Family” is writer and director Anders’ third collaboration with Mark Wahlberg following 2015’s “Daddy’s Home” and its 2017 sequel.  Originally scheduled for release on February 15, 2019, the picture was moved forward by three months to coincide with the holiday season. The picture’s gala Los Angeles premiere was cancelled due to the continuing wildfires in the region, and the film was instead screened in an evacuation center for victims of the fires.

It probably won’t win any major motion picture awards, but “Instant Family” is a movie not even a Grinch can dislike.  And if you aren’t moved to tears by the picture’s denouement, consult a physician--you don’t have a heart.

RichReviewed in the United States on March 7, 2019
5.0 out of 5 stars
One Of The Best Feel Good Movie's Of The Year
Verified purchase
I absolutely loved this movie and had to give it 5 stars! When I first saw the previews for it, I knew it was going to be good and then when I watched it last night, it was even better than expected. The previews didn't show all the good parts either like they usually do. The acting by everybody was excellent! This movie will make you laugh and pull on your heartstrings too. This is the kind of movie that makes a perfect dramedy in my opinion. I would like to say something about the movie, but I don't want to ruin anything and if you're interested in this movie, you most likely already know what it's about. I love feel good movie's like this and if you do too, hurry up and watch this whether you rent or buy! It's also based on a true story which makes the movie even more enjoyable.
114 people found this helpful

Amazon CustomerReviewed in the United States on November 24, 2019
5.0 out of 5 stars
This very accurate and moving depiction of REALITY
Verified purchase
As an attorney working in the Family Court system for 25 years, I will say that this movie is a very accurate representation of REALITY. I read the reviews giving it 1 star because apparently some people want POLYANNA and can't understand this movie is not meant to be some Christian dystopian representation through rose colored, stain glassed windows. As a Christian/Catholic, foster children don't need "parents" whose sole motivation is to make little Christian robots. NO. They need real parents who love them and accept them for who they are. These children have endured more REALITY than most. If you think it's your Christian duty to try to make Christian Ginger Bread cookies out of abused, neglected, abandoned children, then go back and read the Bible. This story is accurate. I would hope people like the "1 star" raters NEVER ENTER THE FOSTER CARE SYSTEM. I have dealt with :"Evangelical: do-gooders-holy rollers in Kentucky foster care system. They end up doing more harm than good. Give me a good Christian family who is interested in loving these children and providing them a home where they are not judged but accepted ANY DAY over some pretend Christian looking to pat themselves on the back I am a Christian. I don't believe my Bible tells me to knock a movie with such a strong, powerful, and important message because of language (language that is reality). I RECOMMEND THE MOVIE TO THOSE WHO WANT TO KNOW HOW THE FOSTER CARE/ADOPTION SYSTEM REALLY IS. Those who want a Christian Melodrama should watch the Jim Bakker hour--send that criminal your hard earned money. Joel Osteen haas teamed up with Kanye West, who said he's more influential than Jesus. Spend your time watching. For those who want a wonderful movie with great acting and a great message, THIS MOVIE IS FOR YOU. i WOULD GIVE IT 5 MILLION STARS IF I COULD!
52 people found this helpful
See all reviews
Back to top
Get to Know Us
Make Money with Us
Amazon Payment Products
Let Us Help You
EnglishChoose a language for shopping. United StatesChoose a country/region for shopping.
© 1996-2021, Amazon.com, Inc. or its affiliates