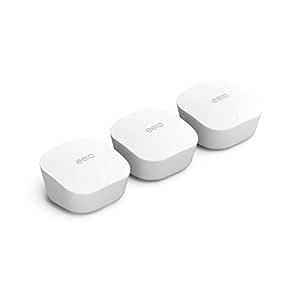 eero seamlessly connects your entire home with reliable WiFi. Finally, you can stream, surf, and game from anywhere.

With Apple HomeKit, eero gives you even more protection of your HomeKit accessories and an easy way to manage what they are allowed to communicate with in your home and through the internet.

Set up in less than 10 minutes

Get the eero app for iOS or Android.

Disconnect your modem and anything connected to it.

With the modem unplugged, open the app and follow along.

From the eero app, you can see what's happening on your network, check device usage, share your network with friends, or even pause the internet.

With eero and an Alexa device (not included) you can easily manage WiFi access for devices and individuals in the home, taking focus away from screens and back to what’s important.

Your data is on lock-down with eero

4.5 out of 5 stars
4.5 out of 5
2,365 customer ratings
How does Amazon calculate star ratings?
Amazon calculates a product’s star ratings based on a machine learned model instead of a raw data average. The model takes into account factors including the age of a rating, whether the ratings are from verified purchasers, and factors that establish reviewer trustworthiness.

sir1jaguar
1.0 out of 5 stars Do NOT buy ANY Dual Band Mesh Router
Reviewed in the United States on October 19, 2019
Configuration: eero 3-PackVerified Purchase
Good day,

I am testing & reviewing more than 50 different brand of routers ( stand alone & mesh) for years, and I can tell y'all that IF you have maximum of 1500 Sq ft of house/apartment, that's newly built & no basement, just get a stand alone tri-band router, that has 4-5 stars review.

If your place is more than 1500 sq ft. with basement, old, lots of hard walls, etc... then get a MESH router that is:

* Tri-band (NOT Dual-band), why? So you will get the speed you're paying for, every month
* A router & satellite that has 6 or more antenna, as it will not just cover more, but it can see you 360 degrees
* WiFi 5 or Wifi 6 (especially IF you have more than 25 devices connected, all the time)
* Have a history of updating the software 5-6 times a year
* Giving a free security suite, not for just a one month, but for a year or forever

And ALL those important things I just said, this router doesn't have!

DO NOT LISTEN to people will say, it's OK for those who have lower than 200Mbps connection, WRONG! Why? Because that 200Mbps is only when you're hardwired, but when you connect ANY of your devices to this EERO, the speed you will get is only half of that OR most of the time, even you're near the router/satellite, you will only get 1/4 of 200Mbps.

I tested ALL known Tri Band Mesh Router, and they are much faster than ANY Dual Band Mesh router, any day.

So, when you are paying for 200Mbps internet speed, and you're using like a Netgear ORBI RBK53, that speed will be almost in every corners of your place, even outside (front and back patio).

We should NOT buy those DUAL BAND MESH ROUTER, so they will change it to a much better hardware and software and NOT charge us for a obsolete technology, an arm and a leg.

I have now the Amazon made EERO, and I'm paying for Spectrum Gig speed, and the fastest I can get is 400Mbps (LITERALLY NEAR the Main router), but with Deco M9, Orbi, Zyxel, etc... Tri Band Mesh Router & ALL stand alone Tri Band routers, I can reach 700-800Mbps in the same location & devices.

Again, DO NOT BELIEVE on the LIES of those will say, dual band MESH router is OK, bla bla bla...

I personally showed to people the difference (when I uninstalled/installed the Amazon EERO vs Netgear ORBI using NOTE 10 Plus, iPad Pro 11 & Surface Book 2) of the speedtest results, for almost the same price, but the ORBI can reach 800Mbps & EERO with only 400Mbps wirelessly, so how much more when you're paying for 200Mbps or 100Mbps? Then that Amazon EERO will only give you 100Mbps or 50Mbps wirelessly, almost anywhere your place, unlike MOST Tri-Band Mesh Routers, they can still give you 200 or 100Mbps...

Save your money, and just get WIFI 5 or WIFI 6, that's TRI BAND MESH ROUTER.

Gregory L.
5.0 out of 5 stars Game Changing Value Priced Mesh System
Reviewed in the United States on September 28, 2019
Configuration: eero 3-PackVerified Purchase
Running Fios we have amazing up and down from the router however the WiFi coverage in our raised ranch was less than amazing. Average speeds over WiFi on the opposite end of the house or even 2 rooms away was 10mps.
Ordered the new Eero system the day after launch and received a day later.
Running a smart home with 46 connected devices I was cautious.
Took down the existing WiFi.
Placed the router into ethernet only.
Connected the first Eero
Cloned the SSID on the Eero (used the same name and password)
Updated the Eero and within 2 min all devices had connected.
Deployed the second in the bedroom and the third in the basement under the bedroom.
Speeds are 78-80mps on the far sides of the house and 80-100 in the main open space.
Total setup time was 30 min including moving a few things, running updates and setting up the account.
ALL of my devices connected back to the network with no issues even the more frustrating smart home devices that only use 2.5ghz. All working almost instantly.
No rebooting of any connected devices was needed. Sonos, Apple TV, Hue, Switches, Mac's, Nest Cameras, Wyze Cameras and sensors, Google Home all connected effortlessly
This is the budged friendly solution you are looking for.
Read more
321 people found this helpful
Helpful
Comment Report abuse

Kirk Barrett
5.0 out of 5 stars I own eero
Reviewed in the United States on September 26, 2019
Configuration: eero 3-Pack
EERO devices rock and work great. You can hardwire or not, and when you do, the speed to each beacon is absurdly fast. The guy worried about being spied on is nuts...he's already being spied on. Go eero and get rid of crappy wifi or the xfinity box or linksys or any single router. 3-pack covers your house right.
Read more
240 people found this helpful
Helpful
Comment Report abuse

SD
1.0 out of 5 stars Disappointed!
Reviewed in the United States on October 3, 2019
Configuration: eero 3-PackVerified Purchase
I am staying two feet away from the device in the hollway.... still shows that I am connected to the device on the second floor. No wonder the signal is weak!
Needs improvements big time! My Ring security cameras also experience "blackouts" from time to time.
Read more
160 people found this helpful
Helpful
Comment Report abuse

SamTheMan
5.0 out of 5 stars Best decision ever. Whole house fast WiFi in 20 minutes.
Reviewed in the United States on November 9, 2019
Configuration: eero 3-PackVerified Purchase
Our house has 3 floors plus basement, approx 5000 sq ft, built in 1893 with plaster walls and other WiFi enemies common to old houses. Family of 6 lived with weak and spotty WiFi for years. Finally fed up, I tried the Eero 3 pack. Extremely satisfied! Solid WiFi in every room on every floor including front porch and backyard. Spectrum 200 MB into modem. WIFI speeds range from 50-200 MB based on distance from nearest Eero unit. Easy set up in 20 minutes. Great customer service before and after purchase (helped with echo multi-room musc set up issue). 25+ devices connected. Easy to use app for guest access, security and family profiles. Best decision ever.
Read more