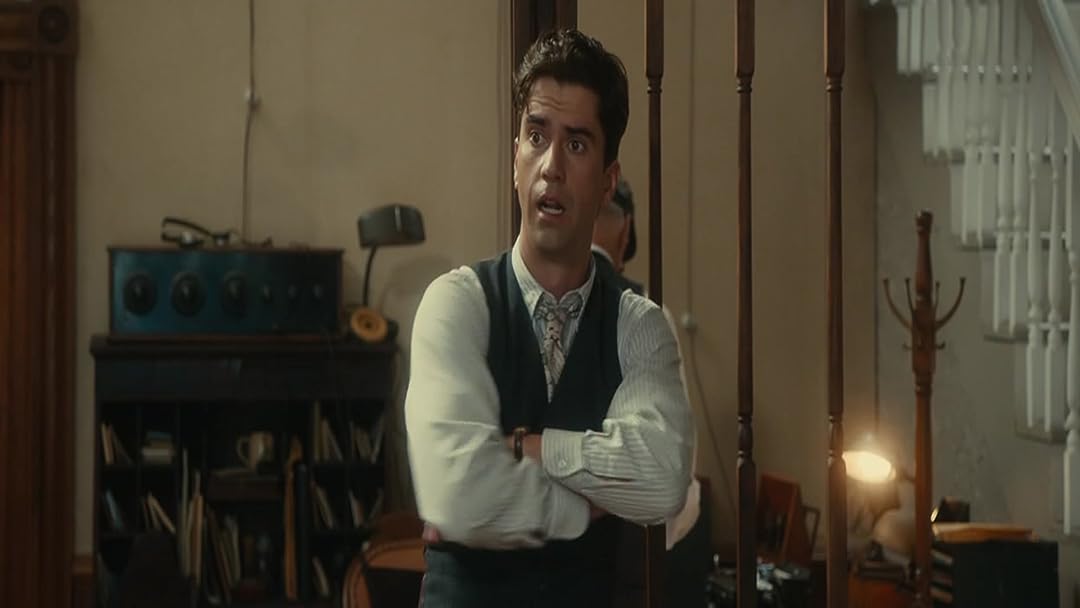 Critical MassReviewed in the United States on August 26, 2018
5.0 out of 5 stars
FOR THOSE OF US WHO LIVED IT, THAT'S THE WAY IT WAS
Verified purchase
Except for the distraction of having Tom Hanks (??) in a basically cameo role, this was a gut puncher of a film for those of us who lived it. There were no guarantees in 1942 that our entry into WWII was going to last less than 4 years and victory was assured. America was just recovering from the Depression years, we had just lost the bulk of our Pacific fleet, German U-boats patrolled the North Atlantic, Western Europe had already collapsed, Britain was hanging on by its finger nails, Hitler had so far successfully invaded the Soviet Union, and Japan was expanding relentlessly southward swallowing everything in its path. Our young men of fighting age as well as their equipment were hardly prepared to enter the arena of such a conflict. The helmets worn in this film looked as though they were WWI vintage. For those who thought that this movie was boring, welcome to a world that once enjoyed relative quietude and home felt secure. You didn't even have to lock your car or house doors. There were certainly parts of the country that still reflected a hideous past responsible for sucking us into a civil war and not completely rectified to this day. But, there was also a sense of civility, decency, neighborliness, and courtesy in large parts of the country that has long since vanished.

This film realistically captured the America that was, a frozen moment in time that would never be the same. From isolationism to global power. Our country went from childhood to adulthood in the same way and as quickly as the young boy, Homer, in this movie who suddenly went from being 14 years old to being the man of the house. For those who criticized the appearance of Meg Ryan or anyone else, what did you expect them to look like at a time when it felt as though the entire world was going up in flames. Have any of you ever experienced Western Union, used a typewriter or a teletype machine? I'm certain that you didn't. Notice that there were no TVs. Look at the cars. What was a mere 75 years ago must look like something out of the Middle Ages. Between 1945 and 1955, the world jumped - all at once - into the jet age, the atomic age, and the space age. Talk about culture shock!! The pace of this movie reflected the weightiness of the war and death clouds that constantly hung overhead. You never knew when that bad news telegram would arrive or when a uniformed individual might show up at your door. Unlike today, where war is fought by the relative few far away, WWII was constantly all around you. If you went to a movie theater, as they did in this film, you saw newsreels of the fighting and wondered if your father, uncle, or brother was among the soldiers or sailors that you saw in the midst of the carnage that appeared on the screen before you and seemed to be scarier in black and white. The genuine acting, atmosphere, and urban setting of Ithaca (representing everytown) at the time was spot on. Kudos to Meg Ryan's direction. This movie should be seen by anyone under 60 years of age. Meanwhile, look for other movies with Alex Neustaedter (e.g.,Walking Out), an up and coming star.

RJReviewed in the United States on September 28, 2016
5.0 out of 5 stars
A brutally honest depiction of the life of those left behind in small town America during the onslaught of World War II.
Verified purchase
Despite the negative reviews, I must say that I was struck half way through the movie thinking to myself "this is one of the best movies I have seen in my life".

It is a portrayal of real life with real characters having real interactions, following the life of a widow and her four children in Ithaca, CA during World War II.

With one child at war and another aspiring to be the best telegraph messenger ever known, you get a little bit of everything.

You see a soldier at war.
You see a widow grieving the loss of her husband
You see a girl growing into a young woman.
You see a boy (main character) becoming a young man.
You see the innocence of a child preserved in a dark world.
You see a man figuring out his life.
You see an old man struggling to find solace when faced with a dismal task.

The best part about this is the film's honesty. You are left caring about all the characters, despite how fleeting their on screen presence is all at the pace of life in a small town during World War II.

The cast was amazing and Meg Ryan did an amazing job as the director.

That being said.... if you're looking for action and excitement, this is not the film for you. It is a slow-paced, emotional drama meant as an honest portrayal of those left behind by soldiers who go to war.
79 people found this helpful

essolunapapaReviewed in the United States on March 13, 2019
1.0 out of 5 stars
Boring At Best, Regretful Once Seen
Verified purchase
This movie was boring and with much less than stellar acting. Not to mention, the military uniforms for WWII were not accurate. The musical score just added to this lack-luster film. The only saving grace to it was the setting with vintage cars and civilian clothing for that era. Sorry I wasted my time watching it, but glad I didn't spend any money to do it. For her directing debut, Meg Ryan chose a terrible script and story-line. Tom Hanks was really doing her a favor in making even a cameo appearance.
4 people found this helpful

Russell SReviewed in the United States on January 9, 2021
5.0 out of 5 stars
Don't you dare be bored.
Verified purchase
We deal with a family, we have the middle son Homer (Alex Neustaedter) Wonderful. getting a job as a telegraph messenger with Sam Shepard (alcoholic) and Hamish Linklater (good) Homer has an older brother who is narrating as he is writhing letters on his way to WW2. Homer is so innocent and naive until he has to deliver telegrams to moms who are losing their sons. Ithaca is a coming-of-age story about the exuberance of youth, the abruptness of change, the sweetness of life, the sting of death, and the sheer goodness that lives in each and every one of us. Tom Hanks has a baffling cameo in this as the ghost of Meg Ryan's husband, BTW, Meg Ryan is an emotionless wreck. She is leterally the only bad thing about this movie. Alex Neustaedter, is awesome and I hope he is going to do much more. This portrayal of a much better time in America is heart warming and a loving snapshot of what the world was like. Big recommendations.
3 people found this helpful

Strong willedReviewed in the United States on February 21, 2018
5.0 out of 5 stars
A good movie
Verified purchase
I really liked this movie. People that don't understand will never accept the movie or plot. Those with an open mind will agree with me that this film is the best. It shows how a boy feels about war. The true feelings.
17 people found this helpful

Chris BReviewed in the United States on December 6, 2020
1.0 out of 5 stars
This is NOT "The Human Comedy" of 1943!
Verified purchase
If Erik Jendresen, who wrote the screenplay and Meg Ryan, who directed and portrayed Mrs. Macauley, sees this story as darkly as they have, I can but feel sorry for both.

Outside of the name of the town as well as the names of the characters, this film bears no resemblance to the well rounded and splendid version of "The Human Comedy" released in 1943. In fact, characters of some import are missing in this film! If anything, I consider it the darkest side of that story which relates more to the mindset and attitudes of today rather than those of 1942-43.

The threads that bound the original story together are absent. There are no threads that bind in this film...not in the story or the characters. Everything seems far too superficially developed, insights discarded, small town togetherness, familial feelings and thoughts are simply not present. Outside of Sam Shepard, who portrayed Willie Grogan, the casting is dead wrong and for the studio to hawk this as a Meg Ryan-Tom Hanks film is no less than cheeky. In my opinion, they sought to make a buck using their names.

I cannot recommend this film to anyone for any reason. For me, it has no saving grace. That Meg Ryan undertook its direction and "bought" the screenplay is sheer folly. I truly do not believe that Ms. Ryan or Erik Jendresen understood the people, characters or period in which this film takes place. Being familiar with the music of the era, I did not hear one piece that touched on it.

loveyakkReviewed in the United States on February 19, 2019
3.0 out of 5 stars
Made me miss my old "Human Comedy".....
Verified purchase
I hadn't watched my old favorite for quite sometime, but watching this and it having left me so completely unfulfilled, I tracked it down. I must have seen the rerun of this film on TV when I was a kid, my mother loved old movies and let me stay up and watch with her. This one is indelible, given how heart wrenching it is, and given that Mickey Rooney played Homer so very precisely. It's just a wonderful film and it's so full of all the feelings that they all had, with their father's passing and then their oldest brother off to war. The war was far away but in a small town with no TV yet to swallow the time, the war what everyone talked about, worried about. In this old movie, everyone had a personality, and mother was wise and strong and had a lot to say. Father had died, but his narration was warm and fully part of the story. If you haven't seen it, you should. You will be filled with the time and become wiser....
5 people found this helpful
See all reviews
Back to top
Get to Know Us
Make Money with Us
Amazon Payment Products
Let Us Help You
EnglishChoose a language for shopping. United StatesChoose a country/region for shopping.
© 1996-2021, Amazon.com, Inc. or its affiliates