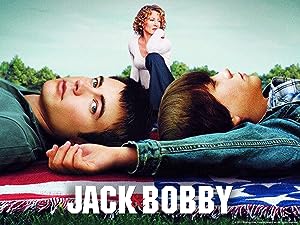 Season 1
(21)
7.9200513+
What if you could watch the next great American president grow up? That compelling question propels a powerful drama from master storytellers Greg Berlanti, Mickey Liddell and Emmy Award winner Thomas Schlamme.

Nicole RegaReviewed in the United States on August 28, 2013
5.0 out of 5 stars
Please consider this amazing, cancelled-to-soon TV show
Verified purchase
Several years have passed since "Jack & Bobby" first premiered in 2004 on the now defunct WB network. However, I find "Jack & Bobby" to be one of the few shows that never gets old to me. It starred Christine Lahti ("Chicago Fire"), Logan Lerman ("Perks of Being a Wallflower"), and Matt Long ("Mad Men"). Long and Lerman played "Jack" and "Bobby" respectively, two brothers growing up with their single mom (Lahti) in Hart, Missouri. The interesting twist about "Jack and Booby" is that one of the two boys will grow to be president of the United States of America. The show skillfully mixes a traditional high school family drama with flash forwards to the future all while showing how events shown on the show will help shape one of the boy's presidency.

It's hard to explain just how much I love this show. The storylines feel real and I love how interconnected the writers made the past and the present storylines. If you're worried about starting a show that was cancelled after one season, please don't be. "Jack & Bobby" has a great, satisfying ending that won't leave you hanging. Please consider this amazing, cancelled-to-soon TV show. I'm so happy that I can download the whole season!

thewvnetworkReviewed in the United States on May 1, 2016
5.0 out of 5 stars
One of the best the early 2000s...you won't regret watching this series!
Verified purchase
Rather than fully review the series itself as many reviewers have done, I will take a different angle and tell a little of the show's background as many have forgotten or altogether overlooked it.

Jack & Bobby was one of the handful of unwatched--but excellent--television series of the first decade of the 21st Century. The 2004-2005 season in particular generated some great new series across the board, of which this series was one. Many critics hailed the show as "too good for American television"...and they were right, it was.

Even though it didn't last beyond its first season, the show's producer's saw fit to give the show a proper beginning, middle, and end, as if they had planned to run the show for just one season all along. It had an unusual pairing of creative teams: the producers of "Everwood" and "The West Wing", both well written but vastly different television programs, but nonetheless gave this series a unique take on storytelling, which perhaps itself led to its demise. While many of its most loyal fans--I consider myself among them--thought the use of the "future documentary" wrap around segments were brilliantly used as a window into the family's future, others found them confusing. If you didn't understand the premise, these segments could possibly take you out of the story entirely, which I presume is what happened to a large amount of the viewers who tuned into the show in its first weeks and earned it a "back nine order". Critics and The WB itself rallied behind the show, though, and President of Entertainment Jordan Levin later stated that canceling the show was one of the hardest decisions he ever had to make. The fact that Levin allowed the show to have the dignity to finish its entire order without reducing its episode count like many failing series serves as proof to this dilemma.

The quality of this series is superb and there is some amazing writing and acting here. I really think the show is best viewed as a "binge watch"...newer viewers will "get" the show much easier if it is viewed 3-4 episodes at a time. You will also find that the show featured many "up and coming" stars, and also some familiar faces from co-creator Greg Berlanti's other series. Stars John Slattery, Matt Long, and Jessica Pare ALL later worked together again on the ever popular cable series "Mad Men", while Logan Lerman has saw a successful career on the big screen. By the time this series came around, Christine Lahti (wife of series co-creator/producer Thomas Schlamme) was already a star in her own right, and has found even more success afterward. Mike Erwin had been a recurring guest on Berlanti's "Everwood" over the two seasons preceding this series as was Kate Mara, and Keri Lynn Pratt went on to guest star on Berlanti's post-"Everwood" gig, "Brothers and Sisters". Speaking of "Brothers and Sisters", Berlanti also took the character of Robert McCallister and his political career over to the ABC hit, including the character details that he had a son named Jack and an ex-wife named Courtney. A reference to Warren's bar mitzvah was even made in an early B&S episode. The character did wind up having a much different fate than the Jack & Bobby character however.

Anyway, if you were ever a fan of "Everwood", "The West Wing", "Mad Men", or "Brothers and Sisters", there is no doubt you will enjoy viewing this short series. And the show doesn't end the way many shortlived programs do...there is an excellent series finale that ties up all loose ends waiting for you at the conclusion of the show's epic run. You'll also enjoy hearing John Williams' score from "The Patriot" (which co-starred Logan Lerman himself) over the credits for 20 of the show's 22 episodes.

I highly recommend this show for anyone who likes sophisticated and unique films and TV.
9 people found this helpful

L. GarberReviewed in the United States on May 21, 2012
5.0 out of 5 stars
One of my favorite shows
Verified purchase
I don't think many people watched this series (obviously not since it only lasted one season). But it quickly became one of my favorite shows. Top-notch writing and wonderful, nuanced acting by a great cast. This was my introduction to Logan Lerman, who was all of 11 or 12 when the show aired. Phenomenal actor, especially for one so young! I've been following him ever since. The series centers around the McAllister family: single mother Grace (Christine Lahti), older brother Jack (Matt Long), and younger brother Bobby (Lerman). Grace is an overbearing, weed-smoking, super-liberal, hot mess. But she has a good heart and you end up rooting for her. Bobby will grow up to be President, although in their younger years it's Jack who seems more destined for greatness. You have to pay attention to Bobby and get past his awkwardness and by-the-book rigidity to appreciate the quiet strength and compassion inside. Both young actors do a wonderful job in their roles.

An interesting feature of the show is that it's actually set in the future, when Bobby is President, and his childhood - which is the bulk of the show - is essentially a series of flashbacks. This show was funny, poignant, and realistic in its portrayal of flawed people and the love that holds them together as a family. I loved these characters. I've been looking for it to come out on DVD since the very minute I found out the show was canceled. Finally, 7 years later, I can download it! Happy birthday to me!!

By the way, I think the writers knew the end was coming and did an amazing job of bringing closure in the final episode. So while I would've loved for the show to continue, it's a nicely contained show with just one season. If you haven't seen the series before, don't worry about there being some unresolved cliffhanger at the end. Please give it a try!
18 people found this helpful

Carl JenkinsReviewed in the United States on March 16, 2014
5.0 out of 5 stars
This show never should have been cancelled.
Verified purchase
I know it came out when pushing the wrong buttons could get you flamed quickly. Now, everyone flames everyone so much we should be realising what we are presenting internationally. Returning or recasting might just work...
I liked this series because it wove together some hard issues and looked at them from pretty realistic points of view, exploring ideas that many found taboo, and many still pretend aren't issues at all. The casting was excellent in my opinion. The characters were developed diversely enough to allow most sides of an issue to be represented, and no one seemed to always get to be 'the good guy'.
4 people found this helpful

MGHReviewed in the United States on January 9, 2013
5.0 out of 5 stars
Excellent show, should be offered on DVD too!
Verified purchase
I never even caught this old WB show when it was on in 2004 but a friend at work bugged me to try it since then I have managed to watch them all and it really was an excellent show with a great cast who were very believable in their roles. Compared to most of the drivel on TV this show was head and shoulders above which is why I suppose it never caught on. Buy an episode and try it, I bet you will end up watching the whole season.
4 people found this helpful

SpyderdrvrReviewed in the United States on September 29, 2012
5.0 out of 5 stars
Wonderful production, sorry it hasn't made it to disk
Verified purchase
This was a wonderful series that used an interesting platform to talk to democratic family values with a sense of maturity and equality. Why it never made it to dvd is a mystery. I'm thankful for the download.
2 people found this helpful

Big D ReadsReviewed in the United States on January 7, 2013
5.0 out of 5 stars
Love This Show!
Verified purchase
Such a well-acted, well-written show. Yes, it was a WB show, which indicates the usual WB formula, but this show turns that formula on its head with its high concept. The cast is fantastic!

N. CallahamReviewed in the United States on June 25, 2016
5.0 out of 5 stars
Five Stars
Verified purchase
Great show
See all reviews
Back to top
Get to Know Us
Make Money with Us
Amazon Payment Products
Let Us Help You
EnglishChoose a language for shopping. United StatesChoose a country/region for shopping.
© 1996-2022, Amazon.com, Inc. or its affiliates