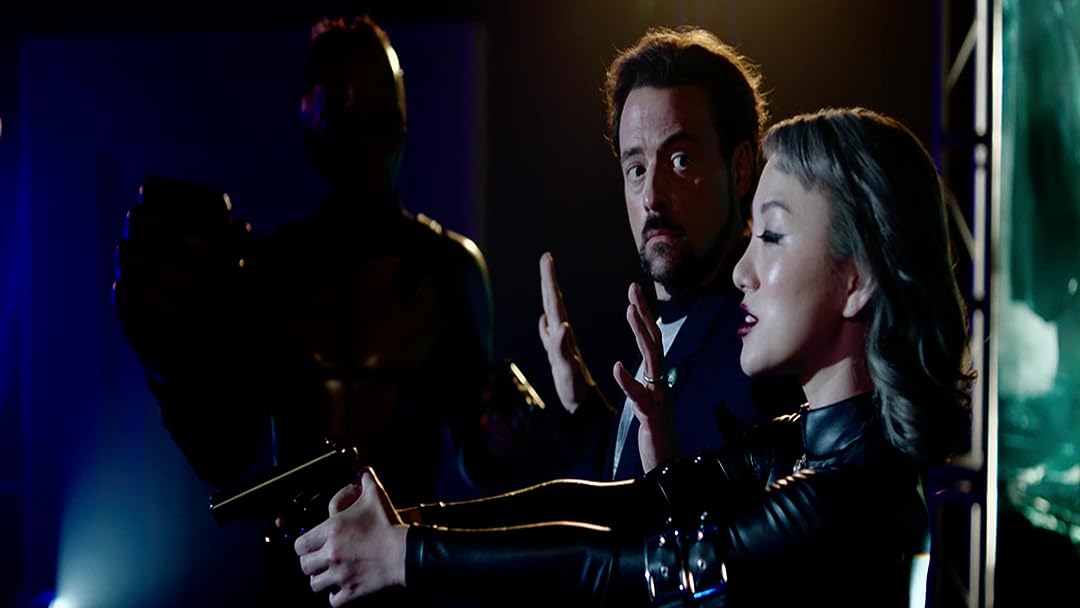 (8,683)
5.71 h 45 min2019X-RayR
The stoner icons who first hit the screen 25 years ago in CLERKS are back. When Jay and Silent Bob discover that Hollywood is rebooting an old movie based on them, it’s game on, as the clueless duo embark on another cross-country mission to stop the madness all over again! With all-star cameos from Matt Damon, Ben Affleck, Chris Hemsworth, Rosario Dawson, Melissa Benoist, Joe Manganiello and more.

Simon MagusReviewed in the United States on January 28, 2020
1.0 out of 5 stars
Almost unwatchable
Verified purchase
I've been watching Kevin's films since seeing Clerks in the theater, when it first came out. They've never been masterpieces (and that's fine); there have been highs and lows along the way (sometimes that's part of the charm), but this latest installment is unbearable. It beats the viewer over the head with "sly" references and nods to all of the earlier movies... constantly! All the while, it thinks that it's being clever. In reality, it's ham-fisted and clumsy. You can frequently see the punchline coming long before the joke has even been set up or told. Also, Kevin crammed so many cameos into the movie that he eats up half the running time, just giving each one of his friends a few minutes of screen-time and overworked dialogue that rarely lands. And, if all of that isn't enough to turn you off, the constant meta-humor and breaking the fourth wall is far too frequent, so much so, that it becomes repetitive and tiresome. This whole movie is "cringe" as the kids say. Originally, I was upset that this didn't get a theatrical release where I lived, which is why I bought it on disc, but now I see why he couldn't get any theaters to show it.
231 people found this helpful

AnAmazonShopperReviewed in the United States on January 25, 2020
1.0 out of 5 stars
Long time Kevin Smith fan. I turned it off after 20 minutes.
Verified purchase
I couldn't do it. This movie was so horrible. Figured, yeah, It's probably not going to be great but I've been watching Kevin Smith movies since Clerks came out, and I like all of them. This movie was so horrible. I just couldn't do it.
146 people found this helpful

EricReviewed in the United States on January 22, 2020
3.0 out of 5 stars
Shockingly bad, but great seeing old friends
Verified purchase
Shockingly bad, and easily the worst of the Askewniverse series. That said, if Kevin Smith's films were ever an important part of your life, this is worth watching just to see Dante, Brodie, Holden, and Alyssa again to catch up with their lives. The mini sequel to Chasing Amy is worth the price of admission alone. But this could have been so much more. The frustrating thing is, there's actually a great movie hidden somewhere just below the surface. I'd love to see a thoughtful film about Jay discovering the daughter he never knew, but handled with the same care and heart that Clerks II was. We only get tiny glimpses of that here. Jason Mewes truly can act. And Kevin Smith can write and direct, and his dialogue is on par with Tarantino's when he tries. But when he goes full Looney Tunes, you get something more aligned with Yoga Hosers. Kevin, I hope Clerks 3 happens soon, and you try to make a film as great as I know you're capable of making.
74 people found this helpful

RaeReviewed in the United States on December 13, 2019
5.0 out of 5 stars
Blu-ray Information, Not A Film Review
So, if you are familiar with Kevin Smith's work, you already have a pretty good idea of whether or not you are going to like this film. If you are not already familiar, there is nothing I could say that would help you to figure that out, given his unique brand of comedy and how personal and subjective the love of that comedy actually ends up being. What you need to know, in the event that you are considering purchasing this for yourself or as a gift, follows here....

First, this is a Lionsgate release. They have confirmed the Blu-ray will have a Digital code, redeemable at the vendor of your choosing, but not at Movies Anywhere, as they are still not a member of that service. (Here's hoping they fix that soon.) Second, they have opted for individual DVD and Blu-ray releases, not a 4K release. However, they have recently begun redeeming codes from Blu-rays in UHD via the Vudu service, when selecting that vendor upon redemption. I will update this review as soon as I know if this film is included in that ever-expanding list of UHD redemptions. (As of the date of this review, Lionsgate is alone in the industry giving UHD redemptions for Blu-ray purchases, and congratulations to them for taking the lead and doing that for their customers. It is actually one of the nicest things I've seen a studio do for customers, in quite a long while, in contrast to several studios that often give an HD digital redemption with a 4K disc purchase.)

As to special features, the confirmed features include the following:
Cast Interviews
Separate/Independent Interviews of Cast and Crew, conducted by Kevin Smith and Jason Mewes
Blooper Reel
Something called a "Hair Reel" (which, given the inclusion of Jason and his famous hair in this film, will most likely involve said hair)

Additionally, the release will have optional English SDH and Spanish subtitles for the film itself, as has become pretty standard in the industry.

When it comes to additional features, the first pressing has been labeled as having a slipcover, with what I can only call the best artwork I've seen this year.

Now the bad news.... Kevin did confirm that Lionsgate did not opt for a commentary on this feature. Given that the interviews do act, in their own way, as a form of commentary, I can partly understand that decision. However, for those of us who never tire of listening to Kevin talk, no matter the content, whether we agree or disagree, whether it is brilliant or drivel, it is a disappointment. He has said he will upload a commentary track, for people to listen to his musings via his podcast, but, sadly, that isn't quite the same as a disc-commentary, which plays while watching the film.

Our family is greatly looking forward to this release and, if you are a fan, this will be one worth owning and watching again and again. Good luck finding the film for you. This one pushes all of my nostalgia buttons, while entertaining me in its own right, and it was wonderful to see Ben Affleck and Kevin Smith back together again, after so many years of pointless estrangement.

Thomas & JessiiReviewed in the United States on December 1, 2019
2.0 out of 5 stars
Avoid. Purely for the nostalgia junkies.
Don't waste your money. Wait for Netflix, Amazon, etc., to get the streaming rights. It's not a "terrible" movie, it's just not good. At all. Even as an admirer of Kevin Smith, I felt like this was purely a nostalgia play designed to get old fans back for a few laughs at the same old stuff. I mean it's literally a reboot satirizing reboots. It just doesn't a very good job. If you're a big fan of Jay and Silent Bob, then you'll probably like it enough to stick around for the whole thing.
88 people found this helpful

ThisIslandEarthReviewed in the United States on January 25, 2020
2.0 out of 5 stars
Unfortnate mess
Verified purchase
I was so excited to hear about this, but was unable to see it in its limited run by Fathom events when it hit the theaters. I'm a long time fan of Kevin Smith, and his movies, especially Jay & Silent Bob hold a special place in my heart. With that being said....I watched this and....I'm soooooooo disappointed. Kevin, what happened? This came no way even close to Jay & Silent Bob Strike Back. There were a few funny spots, the cameos were as expected, but not as before, and the soundtrack, which usually is awesome, completely lacked. I gave it a second watch, and it grew on me a little bit, but the ending is hard to swallow and left me completely confused. It was like a huge trainwreck. Anyways, I can't even imagine how I would have reacted if I saw this on his tour of this movie, um, yes I do...I would have been disappointed. I really hope that he puts a little bits more thought and love into Clerks III and Mallrats 2 because if he can't he should just stop before he ruins his legacy of just making movies to make money and not to make movies with his sense of humor that he is known and loved for.
42 people found this helpful

Randall FlaggReviewed in the United States on January 30, 2020
1.0 out of 5 stars
BOOOOO!!!
Verified purchase
The movie was tolerable until the daughter got involved and it was at that point I shut it off.
You wish it, you want it....you blew it!!
38 people found this helpful

Greg PicadashReviewed in the United States on February 21, 2020
1.0 out of 5 stars
LOVE Kevin Smith. Love the Clerks/ Jay and SB universe. HATED THIS MOVIE.
Verified purchase
Let's make things nice and sparkling clear: EVERYTHING Kevin Smith has done, including Mallrats, I LOVED! great director. Great story writer. Great visionary. But this movie was pure crap. Sorry, Kevin. This one seems rushed, script continuity was negligent, and the overall feel of the movie seems too much of an "inside joke" for nobody else's sake except for Kevin and pals. I was totally disappointed with this movie. Look, I am no movie critic. and I know what I like and don't like. Generally, if you like Kevin Smith movies, then you know how great they have been. Especially Clerks 2. WOW! Now that was one hell of a sequel! But this movie did not do it for me - and form what I understand, the rest of Smith's fans are not impressed. COME ON, MAN! Give us a good Clerks 3 and be done with this mess. Get back to the REAL you and not this "times have changed" crap of a writer you seemingly are trying to be. You're a helluva lot better than this. Just look at Chasing Amy and Dogma - GREAT WORKS OF FICTION!
26 people found this helpful
See all reviews
Back to top
Get to Know Us
Make Money with Us
Amazon Payment Products
Let Us Help You
EnglishChoose a language for shopping. United StatesChoose a country/region for shopping.
© 1996-2021, Amazon.com, Inc. or its affiliates