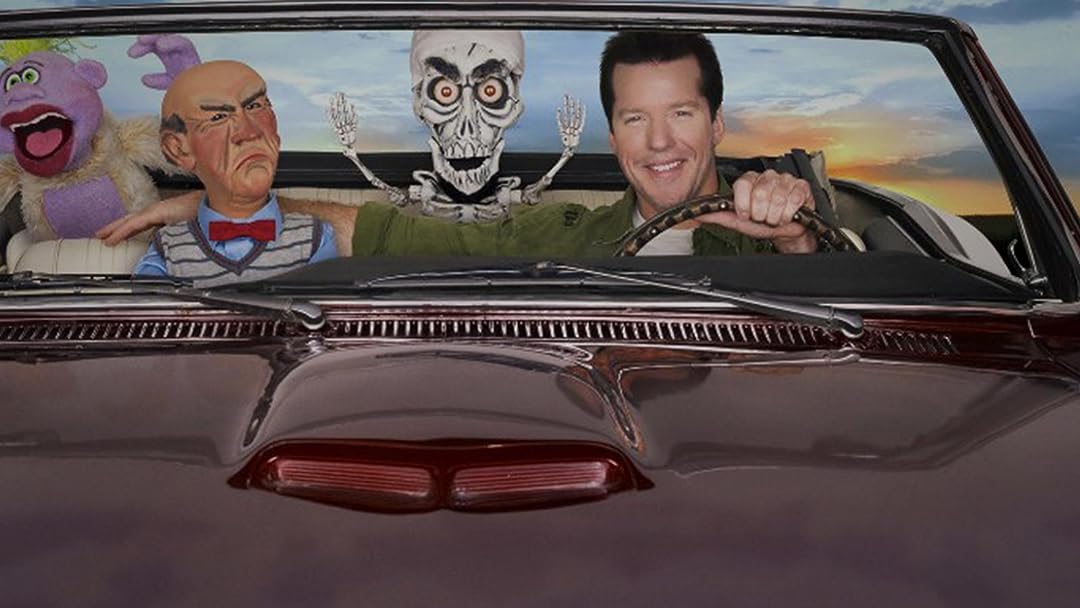 Season 1
(1,106)
5.5200913+
When superstar stand-up Jeff Dunham's outlandish characters infiltrate our world, nothing and no one is safe--from adult films (Achmed the Dead Terrorist gets his first taste) to the n-word (Sweet Daddy Dee helps Jeff reach a new audience).

LunaReviewed in the United States on September 11, 2012
3.0 out of 5 stars
Sesame Street for Adults!
Verified purchase
I like to think of the "Jeff Dunham Show" as Sesame Street for adults. The puppets take on a "life-like" feature and are out in the real world. I LOVE the Jeff Dunham DVDs (Spark of Insanity, Arguing with Myself, Controlled Chaos, and the Christmas Special). I own all 4 of them. Well, Christmas Special only comes with beeped version. Anyway. I have watched the show, don't own it yet. I'll eventually own it. Even if it is more like Sesame Street and less like the other DVDs of Jeff Dunham. Jeff does get on stage a few times with his dummies. This would be the only time we see the vantriliquisim part. When the dolls enter the real world, Jeff is hidden the whole time. In the special features bit, you can see Jeff in a ditch, playing Achmed in California. (At least I think it was California. Camp Pamdleton if my memory is correct. Achmed was joining the Marines! Semper Fi!) If you like the puppets and enjoy them and want to see how they can be in real life, without having Jeff by their side, get this show! It won't be as funny or hilarious as the stage producations, but it will be funny.

Added to review on August 3, 2013
I now own this DVD and I stick by what I said earlier. This is Sesame Street for Adults. So, if you liked Sesame Street as a kid, I think you'll like this as well. I do not recommend this for kids. (I don't recomment Jeff Dunham for kids at all. Let the parents watch Jeff's DVDs first, then decide if it is something they want their kids to watch or not.)

mariaReviewed in the United States on February 25, 2021
1.0 out of 5 stars
the jeff dunham show
Verified purchase
If this DVD were the first of Jeff Dunham's that I watched, it would have been the last. After seeing several others, I was very disappointed with this one. For the most part, the humor I am now accustomed to was,not there. The comedy was largely focused on gay content. This is just my opinion, I don't speak for others. There was laughter in the audience that was present, so others enjoyed it. I am just happy that I can laugh out loud at all his other DVDs. I will continue to buy them as they become available. This new one will be packed in the Good Will box.
One person found this helpful

Robert H. BoyerReviewed in the United States on November 6, 2013
5.0 out of 5 stars
Jeff Dunham is the Best!
Verified purchase
I am 88 years old and have a clear memory of Edgar Bergen and all the ventriloquists who followed him, not a single one of them were anywhere near as accomplished as Jeff Dunham. With Bergen when Charley McCarthy talked Edgar's lips moved so much you were led to wonder whether he really was a ventriloquist. Bergen had two other dummies Mortimer Snerd and his aunt Effie but essential the same voice impersonation. With Jeff Dunham he has five dummies all with their own voices which are quite different and the beauty of it is that when you are looking right at Jeff and Walter is speaking for example the voice is so much his own and Jeff lips cannot be seen to move at all. By his expertise an audience quick gets seduced into thinking that Jeff is talking to real characters. Finally with or without his dummies Jeff is a very good standup comedian.
4 people found this helpful

Misty Lara PrendvilleReviewed in the United States on September 11, 2012
4.0 out of 5 stars
acmed tries out for the Marines
Verified purchase
i saw the clip on youtube of acmed trying to do push ups in the Marines. laughed so hard tears poured out my eyes.
after some research, found out this was the original dvd.

The characters go outside to interact with people. it seems like the people are ordinary people and not actors.

Walter is grouchy as ever. BubbaJ goes to rehab. SweetDaddyD goes to check out Civil war reenactment people. Acmed's french cousin shows up to crash the funeral Acmed throws for himself.

There's a few skits with the characters recording their catch phrases to ring-tones, omg, funny.

Gags are offensive as ever. In the first couple episodes it feels like the offensiveness tried to tone it down a bit, but that didn't last, lol. I'm able to watch most of them without cringing too much, lol.

donchuteReviewed in the United States on August 6, 2013
3.0 out of 5 stars
Excellent ventriloquist and imaginative puppets. However the acts soon became boring
Verified purchase
Jeff Dunham is a very gifted ventriloquist. He goes from character to character with breakneck speed. His voice becomes muffled, as if coming from inside a box. He incessantly argues with his puppets, and his mouth never moves. His puppets are very imaginative. He has an old man, a taco on a stick, an otherworldly main protagonist, a red neck, a dead skeletal terrorist, and a well dressed smooth talking black man. (I hope, that I not omitted anyone.) My only problem is the constant repetition of his acts. At times he puts his characters in new environments, but it still seems very boring to me.
I don't know why. Edgar Bergen had fewer characters; he moved his lips, but I always looked forward to his comedic skills.
2 people found this helpful

Miriam ReyReviewed in the United States on January 12, 2014
5.0 out of 5 stars
Well made and lots of fun!,
Verified purchase
Our son wanted this Jeff Dunham puppet so badly that he was very happy to work for it. He was ecstatic when it came in and right away began to watch the video. He would come running back to show me what he learned. The video is easy to follow and learn from. He has enjoyed many hours of entertainment. It is a great quality product. I would not call this a toy. My son loves that he can move the eyes and neck. The details are fantastic! Having a case, especially in a young 13 yr old boy's room is essential to keep the puppet in great shape. Now, I say puppet but in no way is this to imply that it is cheap quality. I just don't know the correct term and don't want to spend time looking for the word! Yes, that's right I'm going to be lazy. Just don't tell my 13 yr old!

tgReviewed in the United States on November 20, 2012
1.0 out of 5 stars
Jeff Dunham is a HUGE talent
Verified purchase
I love to watch him except all he seems to produce is potty or sexual innuendo humor that is more in line with the intellect of a 12 year old. When we went to his concert last year, we were so disappointed with not only this but the amazing array of fat jokes which embarrassed and clearly humiliated the obese lady next sitting next to me as she not only did not laugh but was visibly hurt when she lay her head on the shoulder of her husband. Sitting in the middle of the seat row, she could not leave in the dark auditorium but did so at intermissions.
Jeff Dunham seems like a super nice and super talented man. I just wish he would find more creative and less harming humor so the entire family could enjoy his wonderful skills.
See all reviews
Back to top
Get to Know Us
Make Money with Us
Amazon Payment Products
Let Us Help You
EnglishChoose a language for shopping. United StatesChoose a country/region for shopping.
© 1996-2022, Amazon.com, Inc. or its affiliates