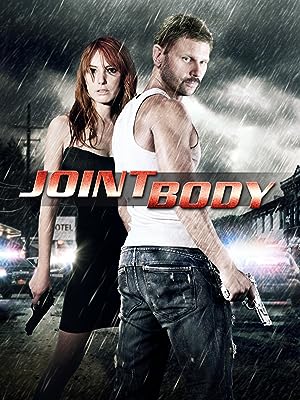 (12)
5.31 h 25 min201113+
Joint Body is a gritty noir crime drama about Nick, a recent parolee, (Pellgrino) who is abandoned by his ex-wife and barred from seeing his young daughter. Trying to move on in his new life, Nick develops a relationship with a lonely, yet troubled stripper (Witt).

warrenReviewed in the United States on July 3, 2018
2.0 out of 5 stars
er....not exciting.
Verified purchase
simply dull. the most exciting thing here is the dvd artwork. I have to change that a bit. not simply dull...…….planned and professionally dull.

LydiaReviewed in the United States on July 26, 2012
4.0 out of 5 stars
a must-see for Mark Pellegrino fans
Verified purchase
A slow-paced slice of life drama, "Joint Body" is the sad tale of Nick Burke,
a man who just can't seem to stay on the right side of the law.

Newly-paroled and forbidden from contacting his ex-wife and daughter, Nick tries to move on with his life,
only to risk everything during an impulsive decision to help Michelle,
a troubled younger woman who seems just as jaded and desperate as Nick himself.

Daunted by the prospect of returning to prison, Nick sets out to escape with the ambivalent Michelle,
who hasn't decided for herself yet if she either wants or deserves to be saved by Nick.
Only after a heartbreaking final attempt to see his daughter do we realize just how he may enact that escape,
for as Nick puts it, he was always guilty of "taking the easy way out."

Alicia Witt gives a convincing performance as the skittish and bitter Michelle,
and the ex-con Nick would most likely be less sympathetic in the hands of someone less skilled than Mark Pellegrino.
Fans of the consummate guest actor (always excellent in "Lost", "Supernatural", and "Being Human")
will enjoy seeing his talents on display in almost every scene here.

CEB89Reviewed in the United States on December 3, 2015
4.0 out of 5 stars
Four Stars
Verified purchase
If you love Mark Pellegrino, and well, who doesn't, you will love this movie.

Alan ThomasReviewed in the United States on August 31, 2014
2.0 out of 5 stars
Two Stars
Verified purchase
I love Alicia Witt, but this is not her best movie.
One person found this helpful

The Movie GuyReviewed in the United States on January 8, 2015
2.0 out of 5 stars
I ALWAYS TOOK THE EASY WAY OUT
Nick (Mark Pellegrino) gets out of prison after seven years for multiple crimes of which we have sketchy details, but we do know he was a violent offender. His ex-wife has moved on with a restraining order barring him from seeing his daughter. Out of prison for less than a week he comes to the aid of a stripper (Alica Witt) and once again faces 10 years in jail.

It is a pretty boring film. There is not much action and the drama left something to be desired. Nick remained calmed and bored looking for much of the film, same as me.

Dexter LoveReviewed in the United States on July 24, 2012
4.0 out of 5 stars
Really entertaining and well acted independent Thriller!
Enjoyed this well crafted movie with wonderful performances by the whole cast -- especially Mark Pellegrino, Alicia Witt, and Tom Guiry. Engaging dramatic thriller for an adult audience. This movie is definitely worth checking out! Would agree #JointBody is a winner.
4 people found this helpful
See all reviews
Back to top
Get to Know Us
Make Money with Us
Amazon Payment Products
Let Us Help You
EnglishChoose a language for shopping. United StatesChoose a country/region for shopping.
© 1996-2021, Amazon.com, Inc. or its affiliates