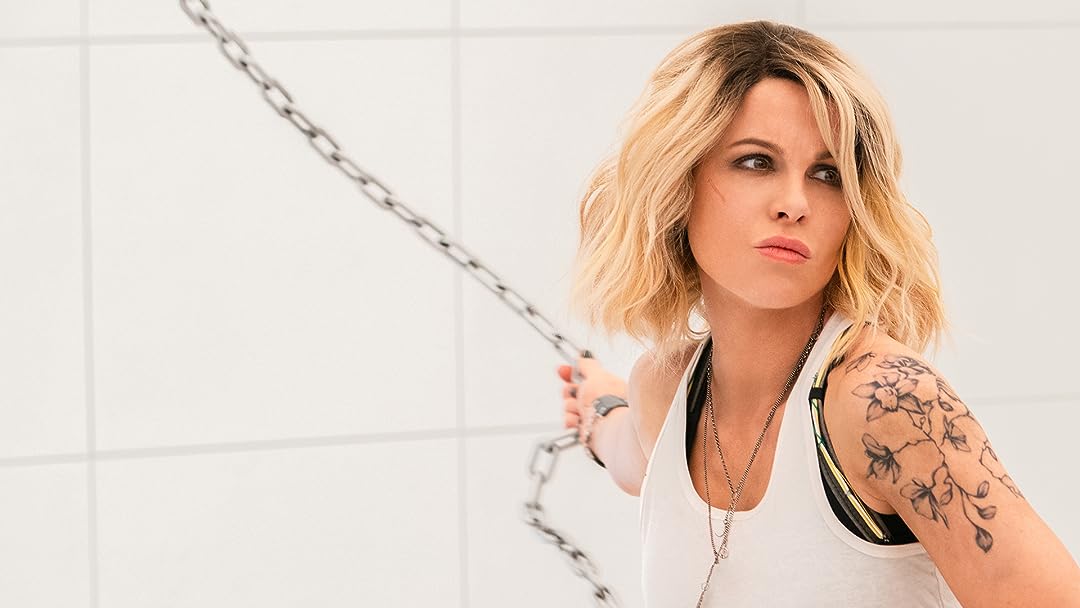 (3,178)5.61 h 31 min2021X-RayHDRUHDR
A bouncer with a slightly murderous anger-management problem that she controls with the help of an electrode-lined vest she uses to shock herself back to normalcy whenever she gets homicidal. After the first guy she's ever fallen for is murdered, she goes on a revenge-fueled rampage to find the killer while the cops pursue her as their chief suspect.

Brian ButzReviewed in the United States on July 23, 2021
1.0 out of 5 stars
"Girl Power" gone horribly wrong
Verified purchase
The premise in theory could be ok despite lacking in originality. (government human experiment gone wrong) It was absolutely horrible however. It really felt like a handful of "B" action movies from the late 80's or early 90's. It's not credible on any level. It's not funny, clever, smart or endearing. I feel horrible saying this, but the film admits as much in dialogue that this is sort of violent PMS ideation. A woman who alternately uses shock therapy to control her emotional whims or indulges them in ultraviolence. For the most part the violence is towards "bad guys", but in one case she leaves a rude waitress beaten unconcious in a restroom stall, with no consequence. Her love interest who is the impudence for her violent revenge streak is entirely 2 dimensional and therefore not remotely credible. Why Stanley Tucci is involved in this garbage I'll never understand, there's also a cameo of another A list actor at the end which makes no sense, but somewhat sets this up as a potential franchise which is a really bad idea. This is really awful, they even use the same garbage EDM song throughout the entire film.
306 people found this helpful

EdCoolioReviewed in the United States on July 23, 2021
5.0 out of 5 stars
Fun movie in the style of "Guns Akimbo", "John Wick", and "Polar".
Verified purchase
I'm writing this review to balance all of the underserved negative feedback. This movie is just flat out a fun, hyper-violent, fast paced popcorn flick that won't put you to sleep. FAR better than the train-wreck Clancy movie Amazon tried to push on an unsuspecting public.

This movie is done in a definite comic book overtone, stylistically with a heavy hand, needing the viewer to suspend belief and enjoy the ride. If you don't like modern woman music, lots of action/violence, a frantic style, or the overreaching theme of "girl power" without it actually being shoved down your political throat - this isn't for you.

The movie starts off with a made up condition which gives the character, essentially, comic book style super powers. Thankfully, the writers didn't go heavy on the origin story and get into it almost right away. Just like it should.

To a certain extent, the movie reminds me of a mash-up between John Wick, Guns Akimbo, and Polar. Woman likes guy, loses guy, goes on a revenge fueled violent rampage after killer, the obligatory plot twist, and finds a little of her true (if violent) self.

Acting is great all around. There is not a lot of boring downtime in this movie. Action and violence are the order of the day.

Kate Beckinsale is the star of this movie, no doubt. She exuded classy style from her accent, boots, and great choice of cool t-shirts. More than that, she kept the movie going at a frantic pace. The only other woman that could have pulled off this role is Samara Weaving (who may actually be a better choice if there is a sequel) in the style of Guns Akimbo.

I really enjoyed this flick. I probably will not watch it again except maybe once more with my adult daughter with whom I've made it a point to watch "women who are strong" movies since she was young. Grab some popcorn and give it a chance.

In the end, Jolt is a comic book style, hyper-violent kinetic action movie. If your a bit uptight about music genres, women in action roles, or are not able to suspend belief to have some fun watching a violent action movie that really doesn't stop - don't bother.

As for the rest of us that like these quirky types of movies, check it out. I did on a whim and I'm glad I did.

N/AReviewed in the United States on July 23, 2021
1.0 out of 5 stars
I guess we are aiming for bad now
Verified purchase
I like Kate Beckinsdale unfortunately for some reason she thought this was a good idea,

The movie is terrible I have no idea how I overcame the urge multiple times to kill it. Woke stupid as usual.

The Soundtrack was god awful. Tear your eyes out awful and cram pencils in your ears awful. Could they have picked worse no name female artists?

The script, plot and story scenes were awful.

Fight choreography was unbelievable. I have no problem with strong female roles. Underworld series was awesome. Peppermint was great. I could name dozens. This wasn't it.

The stupid scene where she attacked a "manspreader" was so cringe it was ridiculous.

The acting was sub par at best for the supporting actors. Even Kate has done better work but she was passable. The male detective was decent and Tucci was ok. Other than that it was B level or worse.

Certain cast members literally sounded like they were reading from a script.

I guess with all this female empowerment females get to compete with males now for female roles in film as well as in sports. Hows that working out for ya?
206 people found this helpful

bizzyReviewed in the United States on July 23, 2021
5.0 out of 5 stars
Entertaining
Verified purchase
Despite what some critics say, I liked this movie. Kind of like a Deadpool theme, comedy wise. Worth a look. I’ve seen a lot of really bad movies, and this is not one of them.
135 people found this helpful

Anonymous Reviewed in the United States on July 23, 2021
1.0 out of 5 stars
This movie is as dumb as the title
Verified purchase
Very corny and no plot. Do better. You sparked a high in the meter of ABSURDITY this filmed offered. Shoot em bang bang is so old.
134 people found this helpful

BobReviewed in the United States on July 23, 2021
2.0 out of 5 stars
If you like gratuitous violence, blood, and body count then this is for you.
Verified purchase
NO SPOILERS -
Boy this decade is starting out with a bang. Literally. I don't see the connection between entertainment and beating someone to death, unless I'm watching UFC.

Oops, I just gave away the plot.

I'll have to say the casting agent is solid and found some excellent co-stars but the characters are out of character. (Jeff Zucker, or his twin, plays a Mob Boss)

Pros:
They spent a lot of money on the production.
95 people found this helpful

SpaceSnaxxxReviewed in the United States on July 23, 2021
1.0 out of 5 stars
Is this 2002?
Verified purchase
The action sequences are what I would expect from a B movie in the late 2000's - lots of cuts during the action scenes, no continuity in character quality throughout the film, no emotion behind the story line (a potential boyfriend is the motivation?!)...This is sub-par work on all accounts.
82 people found this helpful

Craig OwensReviewed in the United States on July 23, 2021
2.0 out of 5 stars
Formulaic Action Comedy Film
Verified purchase
Popular B movie action star Kate Beckinsale (the poor woman's Charlize Theron) does a good job playing a beautiful woman tormented by "intermittent explosive disorder," which gives her super strength, super speed, and a deadly, unpredictable temper. Of course, all of these skills come in handy after her brief romance with a hunky new boyfriend abruptly "flounders." The movie then descends into a paint-by-numbers action revenge flick complete with lots of guys getting kicked in the groin, a car chase, more guys getting hurt in the groin, faked deaths, Beckinsale getting knocked out, the ol' good cop-bad cop routine by two incompetent police detectives, explosions, an eccentric, wealthy super villain and his well-trained henchman, and two of my least favorite action film cliches of all-time: 1. The crowded, noisy room that comes to complete silence when the hero enters and strikes up a stupid banter with the villain...and 2. The villain's cocky and overlong explanation of what really happened shortly before the hero gains the upper hand. Scott Wascha's screenplay is largely responsible for the juvenile, unrealistic dialogue and action cliches. Tanya Wexler's directing adds glitz but even THAT can't save this movie. However, she should get kudos for one well-directed action-chase sequence between Beckinsale and Laverne Cox in a hospital. If only the rest of the film had that kind of energy. Like "Tom Clancy's Without Remorse," Amazon makes it clear that it wants to turn "Jolt" into a franchise. While there is a lot of room for improvement, I don't have high hopes that a Jolt franchise will evolve into something that rises above mediocrity. Two stars: 1. The better than average (but largely wasted) cast; and 2. The fight choreography which is too good for this film.
59 people found this helpful
See all reviews
Back to top
Get to Know Us
Make Money with Us
Amazon Payment Products
Let Us Help You
EnglishChoose a language for shopping. United StatesChoose a country/region for shopping.
© 1996-2021, Amazon.com, Inc. or its affiliates