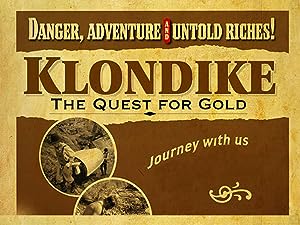 Season 1
(26)
6.620037+
4 men and 1 woman retrace the historic route taken during the 1897 Klondike Gold Rush. Their amazing 10-week journey takes them along the infamous Chilkoot Trail, and to the gold fields near Dawson City. Our modern-day prospectors complete this journey with only the clothes, tools and resources of the era.

MistyReviewed in the United States on June 4, 2017
4.0 out of 5 stars
4 jerks and a Lady
Verified purchase
Great show with lots of suspense and tension. I was a bit disappointed in the director that he didn't shame the men at the end of series 4 after they treated the woman so badly and then she came and shared her goods and money with them because they had been jerks to her during the entire trip. That part irritated me and outraged me the most.
11 people found this helpful

D&amp;G-HReviewed in the United States on July 9, 2017
4.0 out of 5 stars
Good series! Beautiful scenery
Verified purchase
Good series! Beautiful scenery!
-1 star for not fishing and/or hunting until their rations almost ran out. Klondike men would have at least fished and hunted along their journey, supplementing their ration. The photos from the original gold rush showed that they were wearing Grizly skins, or buck skin by the time they reached Dawson Creek. This would have definitely contributed to the overall well being of this crew, 3 men, 1 women. The way they treated this poor girl would have actually been better in the 1890's. That said, it was still worth the watch, and the hardships they faced as a group. By the end though, they all pulled through.
8 people found this helpful

TeleSkierReviewed in the United States on October 3, 2017
2.0 out of 5 stars
Two Stars
Verified purchase
Canadians are such romantic whiners.

ConnieReviewed in the United States on February 9, 2014
4.0 out of 5 stars
Wonder what it was like back then?
Verified purchase
Very interesting so far, It is interesting to see how some things never change.I wonder if they will make it? They already have had an accident that was handled in a modern way--back then?? more suffering or an ended adventure!

williamReviewed in the United States on November 15, 2015
5.0 out of 5 stars
Five Stars
Verified purchase
I'm satisfied
See all reviews
Back to top
Get to Know Us
Make Money with Us
Amazon Payment Products
Let Us Help You
EnglishChoose a language for shopping. United StatesChoose a country/region for shopping.
© 1996-2022, Amazon.com, Inc. or its affiliates