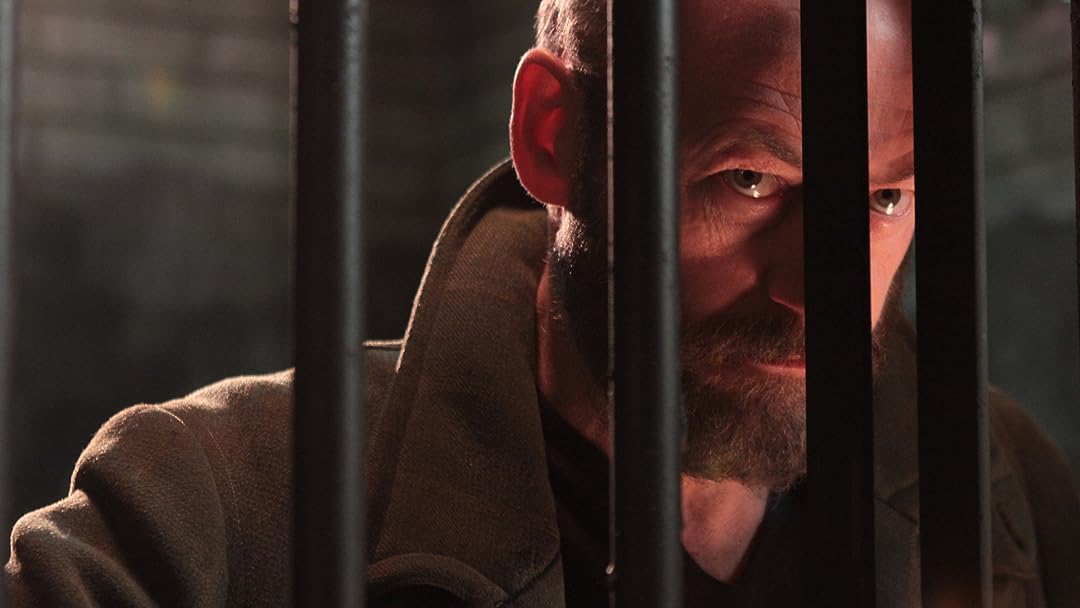 rustyReviewed in the United States on June 26, 2021
5.0 out of 5 stars
Superb Horror/Supernatural Film
Verified purchase
While not an exclusively unique plot, this is a superb supernatural horror film. Liam Cunningham (also a character in Game of Thrones; Davos Seaworth) casts a top-notch performance in this dark horror film. Without giving any spoilers, Liam's character stops into a small Scotch town to collect a few things and all Hell literally breaks lose. This thank God is not another social justice warrior movie trying to indoctrinate you into wokeness, but takes a very realistic and grim view of humanity and it has all the elements of a GREAT horror movie: good plot, good acting, suspense, gore, supernatural and such. Pretty much covers all the bases for a horror flick. Surprised this doesn't have many reviews. Definitely a classic and I've seen well over 1000 horror movies and a big fan of the genre though 99% of it is crap. Some of the characters with strong Irish accents may require you to use the close-captioning but only 1 or 2 characters has the really strong Irish accent. Really surprising to get a non woke film out of Ireland these days. Damn near a masterpiece imho for the horror genre. I would normally give this a 4.5 because I don't like giving out 5s except for the best but since this movie isn't preaching to me about homosexuality, transgenderism, racism, or any other crap Hollywood is putting out this gets a solid 5. Best horror movie in a while. Well worth the time. You can watch it for free right now with ads and a standard Prime membership.
2 people found this helpful

J. MarriottReviewed in the United States on September 5, 2020
5.0 out of 5 stars
Dark, Gritty, Meaty, and Satisfying
Verified purchase
What is justice, really? What do criminal psychologists see that's changeable or correctable in the human soul, when the news every day confirms that we keep on committing the same horrifying crimes, and always have? At one point in this movie, the statement is made that "forgiving is just condoning". Is that true? It seems the answer is yes, because the worst of human sins/crimes are done by repeat offenders. So again, what is justice?

This is one take on it, stretched to infinity. It's solid, scary, and although I'm not a fan of gore, it's actually acceptable in this movie. It's a circle 'round, bad guys to good, good guys to bad, and back again.

Pollyanna McIntosh, who's becoming one of my favorite actors/writers, plays the lead with understated deliberation. Liam Cunningham, who is just superb and not given nearly the credit he deserves as an actor, is ever quiet, patient, and mysterious. Will he become violent, will he explode, will he be worse than the crims he's locked up with? The ending is the best. I was on the edge of my seat for it, and it didn't disappoint.

This is the sort of horror movie I search almost endlessly for. It grips and doesn't let go, it isn't the usual brainless neurotic collywobbles of most horror being made today, which isn't scary, isn't watchable, and is easily scoffed at because it's just so darned awful. The Scots and the Irish are bringing it. I look forward to more of it.

Mikayla BAMReviewed in the United States on February 26, 2021
3.0 out of 5 stars
Unique mythology with grotesque images rather than scares
Verified purchase
If a psychological thriller becomes horror through quantity of gore alone, sure. If horror requires the viewer to be scared, then no. There was a vaguely interesting and unique underlying plot, and I will remember the movie--which counts for something. However, it expects grotesque images depicting evil acts to do most of the heavy lifting, and, in my opinion, it wasn't scary so much as ... tasteless? Unnecessary? Exploitative? Define it however you like, but I wasn't scared so much as disgusted. It was also a little slow. I spent a lot of time writing this review in my head while the scenes dragged by. The mythology makes it almost worth watching, but it's not enjoyable and it's not my kind of horror. It's just grotesque and violent. I'm so desensitized to it that I just frowned and muttered, "Well, this isn't okay. Yeah. Super unnecessary."
One person found this helpful

Todd M.Reviewed in the United States on March 22, 2020
4.0 out of 5 stars
It’s a solid horror worth a better rating than 5.8 on IMDb.
Verified purchase
It’s surprisingly good considering how little was spent on it and keeping it dark and the locations minimal made it a creepy physiological horror movie that works… though I did need Closed Captions for some of the heavy accents. I thought the plot was rather novel though getting some people together and killing them off isn’t all that new the reason they were together was the point… and there’s a reason the rookie cop is there when things start to go down. Not a lot is explained in any detail so some conclusions are your best guess but we enjoyed it and that’s all I want out of a good horror movie… blood, mayhem and action.
2 people found this helpful

LoveReviewed in the United States on November 19, 2017
5.0 out of 5 stars
MASTERPIECE
Verified purchase
This film is a masterpiece. Not sure how it can get anything less than 5 stars. Liam Cunningham is a brilliant actor - his voice, his eyes, his presence - command attention, and the entire cast performed excellently, every character. Each detail of the movie, even some excessive gore at the end of which I am not a fan, is top quality. A life of sin invites the devil in - is pretty much the message that I got. If you're into the spiritual/intellectual cinema, one that leaves you thinking and wanting to watch it again - this might be a great addition for your collection. **Violent scenes, for mature audiences.
7 people found this helpful

CrankReviewed in the United States on March 2, 2022
4.0 out of 5 stars
Solid morality tale with a twist.
Verified purchase
This film is fairly dark with only a few silver linings. The ending is a bit obscure, and so are the characters and their motivations, but ultimately this a decent horror flick if it must be called that. I was never bored, the acting is good to great, and there is solid direction here. I don't think it is a remarkable film, but it's one certainly worth watching as you are never quite sure how it will all play out. The twists are definitely a tad shocking at least half way, but it starts to get pretty gruesome the more the tale wanders into its end zone. An entertaining fable.

RonReviewed in the United States on September 9, 2015
3.0 out of 5 stars
NOW SERVING NUMBER 6
Verified purchase
I rented this one form The Box as I am doing more often now when I'm not sure if the movie would be worth the Amazon price. I hate getting burned with paying to watch bad movies even if its only for a few bucks.
I wish I could remember the US movie that seems to have a simular storyline that takes place in a police station I believe from the 80's or 90's.
The story takes place for the most part in a police station that revolves around 4 cops and 3 arrested locals plus a accident victim 6 (Liam Cunningham) who is a demon or satan or maybe an angel. Six is there to rid the place of bad people. This takes place on rookie PC. Rachel Heggie's (Pollyanna McIntosh) first night at her new assigned station.
The story is evenly paced with good direction and acting, but for me this story didn't bring anything new to the table nor was the story different enough to separate it from other movies with similar plots. We are left with trying to figure out many of the unanswered questions of why was Rachel placed in this hole in the wall police station or why was 6 sent to the same police station and what made these people be singled out for their punishments. Yes, I know they all did very bad things, but the world is filled with even more horrific acts against humanity. The director shot the entire movie with minimal lighting to add a sense of dread or impending doom that was somewhat effective. The movie was shot in Ireland and some of the characters were hard for me to understand like Sgt. MacReady (Douglas Russell) and to a lesser degree Caesar (Brian Vernel). So if you have a hard time understanding some of the heavy/thick accents from the UK, Ireland, Scotland or Wales actors then you might want to take a pass on this one. It is by no means a bad horror movie with heavy/thick accents and dimly lit scenes and a good amount of blood, gore and violence, but rather well produced (thats saying a lot these days) average story horror (that saying a lot too!) with good acting and effects.
One person found this helpful

DodgerGirl67Reviewed in the United States on February 10, 2021
5.0 out of 5 stars
BRAVO!!
Verified purchase
BRAVO!!
FINALLY! A REAL HORROR FLICK W/A SOUL & IT STILL GETS TO THE NITTY GRITTY!
LOVED LOVED LOVED IT.
AS FOR THE 2,3 STAR REVIEWS,,, Y'ALL MUST HAVE WATCHED A DIFFERENT MOVIE BECAUSE THE REVIEW THAT SAY'S
"NEEDS MORE PRAYER" THAT REVIEW MADE ABSOLUTELY NO SENSE AT ALL.
NOT BEING MEAN BUT YOU NEED TO WATCH IT AGAIN, BECAUSE IT'S NOT ABOUT A COP THAT WAS HAVING A BAD DAY AND IT DIDN'T SHOW WHY, LOLO.
IT SHOWED EVERYTHING!!
THEY ALL HAD A BAD NIGHT! LOL.
I LOVED IT SO MUCH IM GOING TO WATCH IT AGAIN RIGHT NOW.
See all reviews
Back to top
Get to Know Us
Make Money with Us
Amazon Payment Products
Let Us Help You
EnglishChoose a language for shopping. United StatesChoose a country/region for shopping.
© 1996-2022, Amazon.com, Inc. or its affiliates