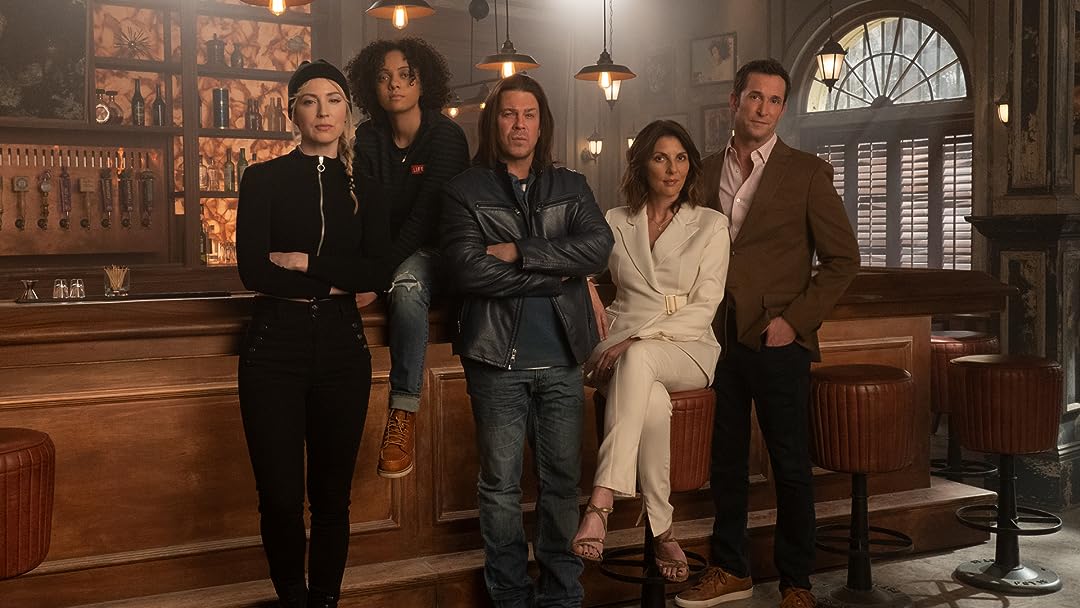 Season 1
(811)8.82021X-RayTV-14
The Hitter, the Hacker, the Grifter and the Thief are together again, this time with help from a new tech genius and corporate fixer, to take on a new kind of villain. From the man who created an opioid crisis from the comfort of his boardroom to the shadowy security firm that helps hide dangerous secrets for a price - when someone needs help, they provide… Leverage.

Dr. ZReviewed in the United States on July 12, 2021
1.0 out of 5 stars
Fun show, but then politics cost it this viewer
I found the show fun and enjoyable until Aldis Hodge left the show and his little sister took his place. It was in the 3rd episode she blatantly totes the MSM garbage narrative by saying how she "hates the way this world is and never expected to see Nazi's return". This is the end of my watching what once was a fun series, Leverage (the original).
This show had promise, but they spent that capital with the cheap shot "Nazi's return"
84 people found this helpful

Amazon CustomerReviewed in the United States on May 27, 2021
5.0 out of 5 stars
The gang is back.
Welcome back: hitter, hacker, grifter and thief, plus 2 new members. Hang-on for thrills, spills, and chills. You'll hear some old sayings, " lets steal a ..... Damnit Hardison, age of the geek baby, very distinctive....." and I'm sure some new ones. You'll be catching up with what the crew has been up to since the last job (The Long Goodbye Job). For anyone new to this crew of Robin Hood esque band of characters. Do yourself a favor and watch the original Leverage, you'll be glad you did.
66 people found this helpful

Karen C.Reviewed in the United States on May 30, 2021
5.0 out of 5 stars
It’s like comfort food with a kick!
Characters so familiar they feel like family; character interactions that will make you laugh, cry, and cheer; the most fascinating and intriguing storylines; and mind-blowing stunts all make up this action-packed show. Since the original Leverage series is my entertainment equivalent of comfort food, Leverage: Redemption is like comfort food with a kick. We waited eight years for it, and it was well worth the wait.
66 people found this helpful

The QueenReviewed in the United States on July 11, 2021
1.0 out of 5 stars
Not Sure What They Were Thinking...
I sat and watched all 8 episodes out of pure boredom on a restful Sunday afternoon. If it wasn't bad enough that Nate was cut from the show, WHYYYYY would the producers think it would be okay to also cut Hardison? Just Why? That comical banter helped to make those 5 seasons a success. Then they add a mixed raced woman, that is supposed to substitute the one Black person in the show. Come on now! Not cool. I was actually looking forward to her ongoing interaction with Hardison. Didn't know she'd be a substitute. The camaraderie and banter between Elliott and Hardison is what made the show. In your overzealous attempt to get to production... as opposed to trying to work with his schedule, you put out this garbage, and then had the nerve to put his face in all the advertising. What a sham.
I've been watching Leverage since the onset. This "redemption" could use some redemption. I read that Hardison MAY be back later in the year for the second half, but if I don't see him in EACH episode, I won't waste my time binge watching... not even out of boredom.
61 people found this helpful

MikeReviewed in the United States on July 10, 2021
1.0 out of 5 stars
Lost Me
Stopped watching after the third episode
50 people found this helpful

A.S.Reviewed in the United States on July 12, 2021
2.0 out of 5 stars
Weak and unreadable, with a touch of woke
Not even close as good as the original. Current woke nonsense, impossible timelines (a cure developed within a few days for a sick kid in episode 6), no Hardison (the real heart of the show), and really bad plot lines. I feel bad for the cast, with Hardison and without the annoying marxist brat, the show would have been ok. Now, its unpallatable.
43 people found this helpful

Viking22Reviewed in the United States on July 10, 2021
3.0 out of 5 stars
Not as good as the original, but similar
I really like the original Leverage. I think I've watched the entire series through at least 5 times. The new "reboot" is good, and similar, but does not live up to the original. I know this is true because I didn't have the urge to binge watch this new season. And when one episode ended, I did not have that desire to watch just one more episode. Don't get me wrong. The new series is worth watching if you like the Leverage genre, and you will enjoy it. Hardison's little sister is NOT the same caliber of character that Hardison brought to the show. I don't really miss Nate too much, although I thought he got a raw deal. Parker and Elliot are still the same likable characters and Sophie does a good job filling in for Nate. I don't mind the changes to the cast, but Noah Wylie and Aleyse Shannon (Especially not Aleyse), do not quite make the grade.

One more thing, I could do without the Woke little digs throughout the new show. The first one didn't take sides. This one feels the need to inject its opinion without adding any value.
39 people found this helpful

KINGOFKINGSReviewed in the United States on July 12, 2021
2.0 out of 5 stars
Woke new girl thinks the 3rd reich is back
Noah's addition while a little jarring, was not as bad as I thought it would be.

The addition of another hacker (haridsons sister) was weird but when hardison exited out completely I was shocked given that the hardison/parker dynamic was a huge and fun part of the show, I was willing to go on since it was still was giving of good vibes.

But then little miss woke says ""Parker, my first memory is of 9/11. I've lived through endless war, two economic collapses, and the return of actual nazis,"

Really, actual nazis. Well I guess she's right if you're taking about blm/antifa the new brownshirts. But we all know she was just being a racist like most of these people who want to push identity politics and turn us on each other. It's sad really, they are pawns of the people they hate (big money/banks/globalists), and don't even realize it . What's really amusing is, the people using them for their agenda are the same type of people the leverage team would go after.

Would have gave it a solid 3 1/2 stars if not for the typical woke/racist bs.
32 people found this helpful
See all reviews
Back to top
Get to Know Us
Make Money with Us
Amazon Payment Products
Let Us Help You
EnglishChoose a language for shopping. United StatesChoose a country/region for shopping.
© 1996-2021, Amazon.com, Inc. or its affiliates