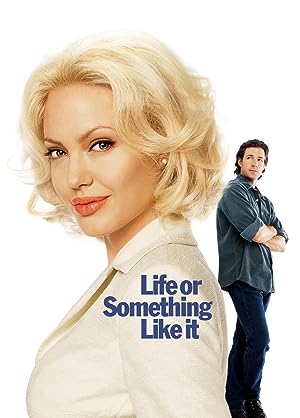 (909)
5.71 h 43 min2002PG-13
A reporter, Lanie Kerrigan (Jolie), interviews a psychic homeless man (Shalhoub) for a fluff piece about a football game's score. Instead, he tells her that her life has no meaning, and is going to end in just a few days, which sparks her to action, trying to change the pattern of her life...

traveler77Reviewed in the United States on January 3, 2019
5.0 out of 5 stars
Light Comedy That Makes You Think About Life In A Different Perspective
Verified purchase
It's rare when a film such as this, a lighter comedy can make you think more deeply about life and how important it is. Angelina Jolie stars in this cute movie about a famous Seattle newscaster and her goals for making it to the big time. When approached by a fortune teller/prophet on the street she is told that she will die next Thursday. Does she believe him? What changes will she make when she thinks that death might be coming? Super nice to have a relatively clean comedy with an A-lister such as Jolie.
6 people found this helpful

Big MommaReviewed in the United States on August 2, 2021
3.0 out of 5 stars
Define 'die.'
Verified purchase
This is the only film Angelina Jolie has made that I like. Maybe it's the Ed Burns contribution.

The feminine half of Brangelina looks and moves like a Barbie doll. I have made my peace with that when I watch her act. She was born with that body and at least some of those looks. It would be cruel to expect her to be a younger Meryl Streep - everyone has limitations.

What makes this movie work for me is that it is a very simple story. Very very simple.

manndrakeReviewed in the United States on June 2, 2014
4.0 out of 5 stars
Satisfaction
Verified purchase
"Life Or Something Like It" is an enjoyable romantic comedy despite a title that is too long and too generic. The concept--A homeless man who sees the future tells an ambitious television newswoman that she has one week to live--is interesting. The plot is well structured, and the theme, expressed openly in voice over at the end, is easy to agree with.
Many people feel that Angelina Jolie was miscast in this movie, and, considering her roles in action movies or her films about the horrors of war, that might seem reasonable. But, if you set aside that body of work and watch her in this film, it becomes obvious that she understands the genre and knows exactly what she is doing.
Tony Shalhoub is excellent as Prophet Jack and Greg Itzin is a fine character actor. This movie's shortcoming is that Edward Burns does not have the star stature to stand toe to toe with Ms. Jolie. For most of a romantic comedy the leads are adversaries, so they must have equal status in the eyes of the audience. The dialogue between Mr. Burns and Ms. Jolie is sharp, but it just doesn't crackle on the screen. In Another comedy, "Mr. and Mrs. Smith," the dialogue comes across much better because Ms. Jolie and Brad Pitt have equal standing.
Even if you don't like romantic comedies, hang on until the "bus strike" scene comes along, and maybe you will join Ms. Jolie and drivers as they hop to the beat, pump their fists in the air, and belt out "Satisfaction" along with the Rolling Stones.
4 people found this helpful

bookish327Reviewed in the United States on April 27, 2004
5.0 out of 5 stars
This movie is well worth your time
Verified purchase
As you probably know, this movie has not always been well-received. But, speaking as a die-hard fan of romantic comedies, I think those of you who love this genre should definitely watch this movie.
Most people who enjoy romantic comedies will probably admit that, though we love them, many of these movies have plot holes here and there, or at least admit that the likelihood of such things happening to real people is questionable. So, with that already in mind, a viewer often falls in love with one of these movies because: a.) they love the actors, actresses, or director involved, and/or b.) the certainty that everything will probably turn out okay in the end (even if sometimes the movie's resolution is not what you'd expect). If you fall into one/both of those categories, you should see LIFE OR SOMETHING LIKE IT.
One of the reasons I think this movie is great is because Angelina Jolie and Edward Burns (as well as Tony Shalhoub, as the street prophet) are such great actors, and their banter and chemistry are highly watchable. The supporting actors & actresses also add to each scene they're in, especially the guy playing the sound technician who works with Jolie's and Burns's characters when they are out on assignment.
I'm not someone who can tell when a movie is badly directed or superbly directed; I just know when I leave a movie happy for having seen it, or when I've felt the loopholes left in the finished product are way, way too big to ignore. So, having warned you of my novice critical skill, I think the director did a great job. (In his commentary on the DVD, he explains that this is one of the movies whose production was a bit rushed because of the expected actor's strike that the industry feared at the time. So, I think he may wish he could have tweaked things here and there, if he'd had more time.)
Nonetheless, you should see this movie because it will still grab your heart and make you think about what is important in your own life, while still giving you that romantic comedy "buzz" that will put a smile on your face and joy in your heart.
6 people found this helpful

TheresaReviewed in the United States on October 20, 2021
5.0 out of 5 stars
Angelina
Verified purchase
We saw this film when it was first out and fell in love with it. Have watched it every time we found it and since on apps now we can watch it as often as we want. Good story line and yet funny, very entertaining. Of course we wouldn't have watched it in the first place if it hadn't had Angelina Jolie in it. She is the best.

Barbara EllenReviewed in the United States on August 5, 2021
3.0 out of 5 stars
Predictable, Jolie Puff Piece
Verified purchase
Disappointed, as this movie was highly rated. I watched it because I like Jolie; sadly, little acting and much posing. The camera does love her. Seems the movie was just a vehicle for her to be seen. Shalhoub was good, as always, but not worth the watch for me.

RAD!Reviewed in the United States on January 2, 2015
5.0 out of 5 stars
An unexpectedly great movie!
Verified purchase
Normally I'm not an Angelina Jolie fan, however, this movie is the one exception. Any film associated with Edward Burns is always a knockout of a movie. Intelligent, witty, sarcastic and the characters so well portrayed that they keep you engrossed from beginning to end. Initially I was hesitant to watch this movie, given the subject and Angelina Jolie's participation, however, I believe it's the best work she's ever done and the best film of her career. Edward Burns on the other hand, this is just another notch in his belt of stellar movies that never fails to deliver the perfect blend of cynicism, optimism and captivating dialog that can be enjoyed over and over again.
2 people found this helpful

Kindle Customer Mary Ann GreenleyReviewed in the United States on November 29, 2013
5.0 out of 5 stars
Love your life !!!
Verified purchase
Angelina Jolie showing us yet another delightful character played to perfection. She is so beautiful and plays this role to perfection.
Interesting circumstances, future predictions and the turmoil that is causes and a great motion picture showing the audience that living each moment to the fullest is the only way to live because one day it will be your last moment and make it a great one, always.
Ed Burns was so real and living his life exactly the way it should be, for him, and his life changes and adjusting to the new life he created to be near his son.
I loved this film and after renting it twice, I now plan to purchase it, it is a keeper.
2 people found this helpful
See all reviews
Back to top
Get to Know Us
Make Money with Us
Amazon Payment Products
Let Us Help You
EnglishChoose a language for shopping. United StatesChoose a country/region for shopping.
© 1996-2022, Amazon.com, Inc. or its affiliates