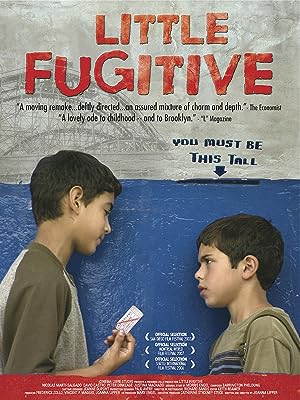 (16)
5.71 h 28 min200916+
With his father, Sam (Peter Dinklage), in prison and his mother, Natalia (Justina Machado) working long hours, Lenny, age 11, is burdened with the responsiblity of looking after his younger brother, Joey. Lenny plans to celebrate his twelfth birthday with friends at Coney Island on the Cyclone rollercoaster. Lenny's mother goes to Atlantic City for the weekend and leaves Lenny in charge.

Joe BReviewed in the United States on July 26, 2016
3.0 out of 5 stars
Not as good as the original
Verified purchase
This movie was ok, but the original was better in my opinion. For what it's worth, the original came out 30 years before I was born.

Peter Dinklage is great in the movie though!

JimmyReviewed in the United States on August 1, 2020
1.0 out of 5 stars
WTF?
Verified purchase
Was the potential rape scene necessary? Ends in such an irrelevant manner. Slow garbage movie.

helene abramiReviewed in the United States on June 21, 2020
5.0 out of 5 stars
Brings back great memories
Verified purchase
Great classic movie

PaoReviewed in the United States on January 17, 2013
5.0 out of 5 stars
Great Movie! Excellent actors.
Verified purchase
This movie was really good, a lot of sad parts, especially the ending. All the actors did an excellent job in this movie! Recommend to watch.
One person found this helpful

L. OrvReviewed in the United States on April 1, 2018
2.0 out of 5 stars
Two Stars
Verified purchase
slow

pipnutsReviewed in the United States on July 26, 2015
5.0 out of 5 stars
When you hit the wall, befriend the person next to you.
An honest account of the relationships within a troubled family, this film is lean and taut, with absolutely no melodrama. I know from what I have seen in life that the situations depicted here are an entirely accurate account of what can happen to fractured families that live on the breadline. This film shows, in the deadpan, matter of fact approach taken by children who actually are in this state, what half-abandoned children go through, and the dangers they have to face when they run away from home because of events there. Much of the quality of representation in this film is down to the bravura performances of the two young leads, Nicolas Marti-Salgado and David Castro, and to the Director, Joanna Lipper, who helped them produce those performances. Any trainee public officials and aspiring politicians would do well to watch this film.

Jeremy StorlyReviewed in the United States on February 6, 2012
5.0 out of 5 stars
I haven't seen the original, but I'm impressed by this remake.
This movie is a remake of a 1953 classic film with the same title. I have not seen the original, but taken on its own, this is quite an impressive first effort by director Joanna Lipper. Most of this film's negative criticism tends to compare this film with the original, and perhaps Lipper shot herself in the foot by adopting the original title. After all, it seems this is more of an appropriation than an adaptation, and it deserves to be viewed for its own merits rather than trying to compete with a film with an already established reputation.

The premise is the same as the original: older brother plays prank on younger brother. Younger brother thinks he has killed older brother and flees to Coney Island. The original premise may be the same, but Lipper seems more concerned with making a statement about social problems and family. Not that this is a message movie, but she definitely shows a sensitivity for all the characters in her film, and we sympathize with each one: the imprisoned father (Peter Dinklage), the overworked alcoholic mother (a brilliant performance by relatively unknown Justina Machado), but the movie really belongs to the young actors who play the two boys, David Castro and Nicolas Marti Salgado. Lipper inspires in these two a naturalistic approach to their roles that is steeped in childhood. Like Jem and Scout in Robert Mulligan's great adaptation of _To Kill a Mockingbird_, these two boys become the two brothers Lenny and Joey. However she does it, Lipper inspires in these two actors an incredibly convincing performance. It is easy to imagine these two as brothers in real life, and it is surprising we have seen them in few roles since this film.

In conclusion, I am not sure how this measures up to the original film, but it stands on its own and, for what it's worth, deserves to be judged on its own merits rather than on its inability to live up to critics' pre-conceived notion of what this film should be. We should, rather, see it for what it is -- a sensitive, memorable film.

4 people found this helpful
See all reviews
Back to top
Get to Know Us
Make Money with Us
Amazon Payment Products
Let Us Help You
EnglishChoose a language for shopping. United StatesChoose a country/region for shopping.
© 1996-2022, Amazon.com, Inc. or its affiliates