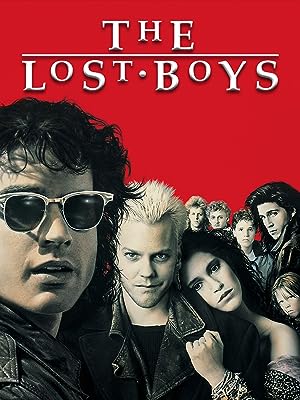 (16,702)
7.21 h 37 min1987R
When a single mother and her two sons move to the sleepy seaside California town of Santa Clara, they discover much more than they anticipated.

KatReviewed in the United States on January 4, 2021
5.0 out of 5 stars
EYE CANDY ON ACID!!!
Verified purchase
Why can't they create films like this today? Kiefer, Jason (oh Jason!!) Amy, Dianne... and the most adorable, hilarious and addictive acting of the two Corys ever!! I've been a huge fan since the movie came out and I swear, it keeps getting better everytime I watch it. Late 80s in all its edgy and sexy glory. I could cry its just so yummy, scary and fun all at the same time. Great acting and no over the top CGIs, pure late 80s with a healthy dose of cheese here and there. Amazing soundtrack which I proudly own. Loving this forever! <3
21 people found this helpful

Alexa E.Reviewed in the United States on February 25, 2018
5.0 out of 5 stars
Good movie with a timeless, relatable story line
Verified purchase
I love this movie. Even though I was born in '88 I can still appreciate this movie for its relatable story line about a mom with two teenage boys who goes to live with her father after a bitter divorce, the hot guys, the stylish (for the 80s) clothes, how it is to be young, naive and easy to get mixed up with the wrong crowd. Kiefer Sutherland (as well as the rest of the guys in his crew) was SO handsome and this movie makes for a great night-in movie.It also satisfies any horror-movie buff's hunger for some atmospheric and low-thrills horror. I like to watch it a lot just to see Kiefer and the oily sax man (I love the song he plays at the boardwalk!) It really does make me wish I lived in the 80s. What a great time for music and movies.
26 people found this helpful

joel wingReviewed in the United States on December 10, 2020
4.0 out of 5 stars
"My own brother ... a vampire. You wait till mom finds out"
Verified purchase
The Lost Boys is a classic. A family moves into a new town called Santa Carla. On the back of a billboard it says “Murder capital of the world.” There are missing persons flyers all over the town. The oldest son then makes some friends and they turn out to be vampires. Typical all American story.

What’s good about the movie is that it doesn’t take itself seriously. When the younger brother Sam for instance finds out that his older sibling Michael is becoming a vampire he says, “Wait until mom finds out.” Sam than asks his two friends to confirm Michael is turning and they ask whether he has bad breath. Sam says yes but he always had bad breath. If the comedy wasn’t included the Lost Boys could have very well been a very cheesy movie.

The story is really fun and not your usual vampire plot. It’s a classic for a reason.
C

Mickey Yeah YeahReviewed in the United States on June 7, 2021
5.0 out of 5 stars
Not what I thought
Verified purchase
I thought this movie was about Peter Pan’s friends all grown up and I was severely disappointed it was a prequel to twilight. What a bummer. On a positive note this morning a got a note from the bank saying they had made a critical error about a withdrawal they had made from my account several years ago , a mistake that resulted in a couple thousand dollar withdrawal out of my account... anyways, today that was put back, with interest! So I went out and I bought 3 dogs!!! Yes 3! I know that sounds crazy but I’ve always wanted to buy three dogs at once, I do live in a very small apartment and I did get Wolves just like in the movie so that’s one good thing about the film I guess, and I’m feeling very positive about the whole situation. Anyways this movie was mad dumb, who would ever confuse worms and spaghetti what an idiot lol. I give the movie 2 stars but I give my really cool life with me 3 new wolf dogs 4 stars, two thumbs and 6 paws way up. Woot woot and woof woof!
2 people found this helpful

Groovy TaterbugReviewed in the United States on May 24, 2017
5.0 out of 5 stars
Teeny boppers beware.... these vampires bite, they don't wear designer clothes, sparkle, or have their hearts broken.
Verified purchase
I've seen this more then 25 times over the last few decades. How can you go wrong with a classic like this one!!! Vampires don't sparkle kids, they are vicious, cruel and hungry, the way they ought to be, not falling in love, being a senior in high school for a 100 years, or living off forest creatures for blood.
This is the real thang, dang a tang.
Come over to the dark side.... we have maggots Michael.
40 people found this helpful

LanaReviewed in the United States on November 24, 2020
3.0 out of 5 stars
One of the best teen vampire movies to come out of the 1980's.
Verified purchase
This is the 1987 teenage vampire film, directed by Joel Schumacher. It stars Kieffer Sutherland as David, Corey Haim as Sam, Jason Patric as Michael, Jami Gertz as Star, Corey Feldman as Edgar, Dianne Wiest as the mother.

Story: Two teenage brothers Michael and Sam with their mother who has divorced, move to a small town in Northern California. Sam is befriended by two comic-book nerds who warn him about vampires living in the town. Michael meets and falls for a pretty girl named Star, who seems to like David, the leader of a gang of vampires. Sam and his new friends must save Michael and Star from becoming full vampires.

This is one of the better, if not the best teen vampire movies to come out of the 1980’s. It has a very good soundtrack and is surprisingly entertaining with some real scarry moments. This said, it is obviously meant for the issues facing the adolescent. It explores the teenager’s need to find themselves and where they fit in society. In the process, they grow up and learn to deal maturely with serious issues of life including drugs, all shrouded in a humorous campy manner. Definitely easy viewing. I give this film 3 stars.

JessReviewed in the United States on November 15, 2021
5.0 out of 5 stars
Fang-tastic Movie! Must Buy! ^vv^
Verified purchase
If you are an 80's horror movie lover or you just love vampires, then BUY THIS MOVIE!
The Lost Boys is such a classic horror movie. It has a fang-tastic cast, who are: Kiefer Sutherland (David), Billy Wirth (Dwayne), Brooke McCarter (May he rest in peace) (Paul), Alex Winter (Marko), Jamie Gertz (Star), Jason Patrick (Michael), & the two Coreys: Corey Haim (May he rest in peace) (Sam) & Corey Feldman (Edgar Frog) and so many more.

Also in the words of Chucky, the killer doll, "A true classic never goes out of style."

dustyrose1973Reviewed in the United States on January 7, 2017
5.0 out of 5 stars
Excellent Teen Vampire Film That Has Withstood The Test of Time
Verified purchase
I loved this movie as a young teenager and I still like it now. The clothing and hairstyles definitely date the film (Corey Haim's character especially) and some of the special effects used on the vampires are a bit campy but this movie is still well worth watching. I would have to say that this is one of the better "teen vampire" films and it has held up well over time. Watching this film recently also reminded me of what a hottie Kiefer Sutherland was back in the day! If there was ever a point to date the origin of my long standing celebrity crush then this was definitely it. Corey Haim was still in his adorable phase and one of my favorite scenes in the film is when he is singing in the bubble bath. Plus, how cool is the Grandpa character?!? The twist at the end of the film was also a good one. It makes a rewatch with the new found knowledge especially enjoyable. I definitely recommend this film.
7 people found this helpful
See all reviews
Back to top
Get to Know Us
Make Money with Us
Amazon Payment Products
Let Us Help You
EnglishChoose a language for shopping. United StatesChoose a country/region for shopping.
© 1996-2022, Amazon.com, Inc. or its affiliates