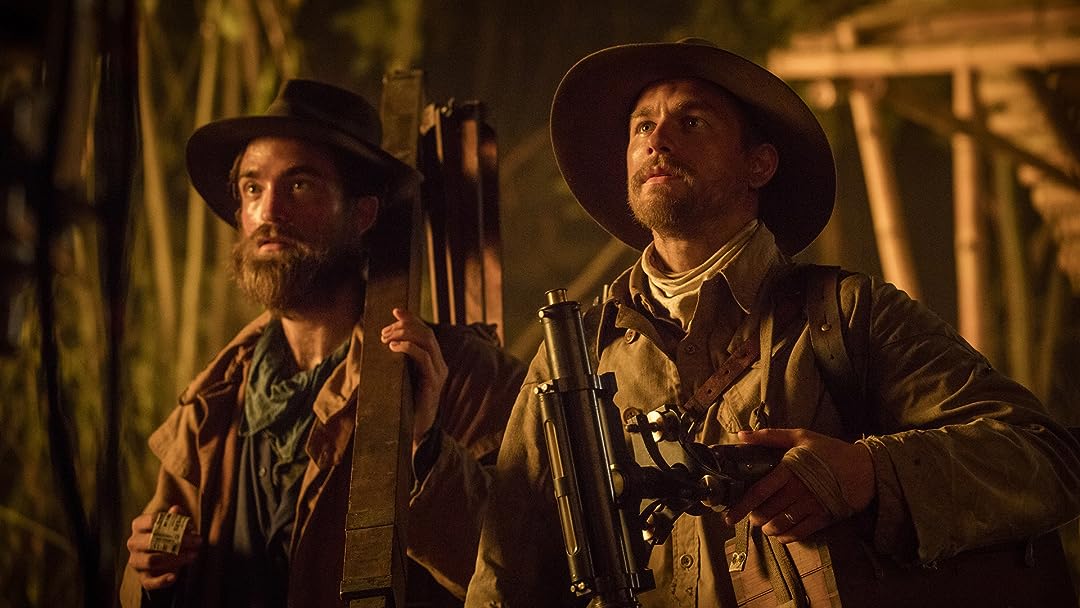 The Lost City of Z

(2,755)
6.62 h 21 min2017X-RayUHDPG-13
The Lost City of Z tells the incredible true story of British explorer Percy Fawcett, who journeys into the Amazon at the dawn of the 20th century and discovers evidence of a previously unknown, advanced civilization that may have once inhabited the region.

D. BatemanReviewed in the United States on November 3, 2017
3.0 out of 5 stars
Interesting but ultimately unsatisfying
Verified purchase
This was a good movie, but uneven. It is about real-life British army officer/explorer Percy Fawcett seeking medals for his uniform and making up for the disgrace of his father. He gets assigned to map the border between Boliva and Brazil. But after seeing how the natives are treated, finding some (old?) pieces of pottery deep in the Amazon jungle, and hearing tales of a lost city, finding the city turns into an obsession for him.

For a movie about exploring the Amazon trying to find a lost city, it has precious little jungle hardships and precious little ancient ruins or artifacts. While he is a mostly likable character the movie really seems to be about Fawcett's personal, Royal Geographic Society, and military problems more than anything. It also has a social justice/class theme that seems a bit heavy-handed. Maybe Fawcett really was ahead of his time in that thinking, and his wife really did feel repressed by society, or maybe it was just put into the movie to please modern audiences?

The plot moves in fits and starts, one moment Fawcett is deep in the jungle and next he is back in England. Or they get attacked by natives and suddenly the scene is over, there is no discussion about defending themselves better or how often it happened. The movie skips hours, days, weeks, or years at will. This happens multiple times, the movie already seems long at 2.5 hours but it still should flow more logically or at least have some sort of explanation/narration between the time gaps.

The ending is not great but given the real-life story, it is understandable.

AlbeoReviewed in the United States on December 14, 2018
1.0 out of 5 stars
Tedious as life without character.
Verified purchase
The Lost City of Z is a series of vignettes to illustrate the life of our protagonist. These situations are often interesting scenes, touching on many different aspects of life at the time. But I never found Hunnam intriguing. He plays the same forceful semi-father figure he did in SOA, just this time with a mustache and uniform. In our sequence of scenes I never felt any sort of character development or attachment to his character. The man failed to learn, committing similar mistakes on each of his expeditions all while maintaining an unchanging outlook. Some of these scenes are intriguing, others are not. Had the film delved more into Latin American slavery or the Amazon it could have been amazing, but instead we have our time wasted on astrologers and preposterous arguments over Native Americans' inability to build societies. Were the Aztecs and Mayans unknown at the time?
It was a wasted film. The cast (aside from Hunnam) were good, the locations were beautiful, the setting was authentic, but the soul and heart of a good story is still lost in the Amazonian jungles.
51 people found this helpful

ValuemindedReviewed in the United States on December 24, 2020
1.0 out of 5 stars
Incredibly boring, inert tale that ends up nowhere
Verified purchase
If you're looking for a fantastic story about a lost civilization, this isn't it. Don't let the title fool you. This is the story of a British explorer that claimed to have found a lost city in the Amazon... only we never see it. The title is misleading, because the film is really just a biopic of Percy Fawcett. There are a lot of pointless, disconnected scenes in this movie that hold little interest, and seem to be included by director James Gray simply because they were in the book. Even the scenes in the jungle seem to be a random collection of shots strung together more than a cohesive series of events that follow a definite timeline. The pace is incredibly lethargic, and Hunnam brings none of the charisma to this character that he projected in Sons of Anarchy. In the end the audience is left as lost as the explorer himself.
21 people found this helpful

ScottReviewed in the United States on September 25, 2017
5.0 out of 5 stars
What do you call a good book in film form?
Verified purchase
This was not what I expected. Each chapter--and it feels like a book when you're watching it--is well defined, each character true to themselves, and while the ending leaves you haunted, it does not leave you unfulfilled. I sat listening to silence as the credits started to roll--I paused it almost instantly because the music interfered with my thoughts--like someone turning on a radio after a good read. It was jarring, to have anything intrude on that last, potent image.

Without spoilers, there will be questions when the film ends. You will like and dislike the main character in equal measure, both for his fortitude, his courage and his selfishness that leads, in the end, to a terrible sacrifice. But to glimpse the journey this way made me feel like I had missed out on something. Part of me wanted to be out there with them, warts and all.

Theres a question many people ask throughout there lives: if you had it to do over again, would you? I think Percy would have answered: "Without a doubt!"
61 people found this helpful

John KimReviewed in the United States on November 23, 2018
1.0 out of 5 stars
Painfully forced plot that belies the point
Verified purchase
The story modernizes Percy Fawcett's story to be all about love of family and uplifting opinion of the Amazonian Indian tribes, which comes across as painfully forced at times. Fawcett had some bizarre ideas even for his time, and I can understand editing or simplifying that, but the portrayal came across as very forced modernization.

Further, the plot does the exact opposite of this stated ethic. The Indian characters are extremely marginal, and it even portrays some of them as violent cannibals. As far as I can tell, this is completely ahistorical - Fawcett didn't report cannibalism in his accounts, and none of the peoples he would have been in contact with are characterized that way. It's just a way of making the story more lurid and buys into exactly the stereotypes that he supposedly opposed to.

It similarly invents lurid fictional action about the circumstances of his death, which are unknown.

The acting and cinematography are fine, but the dialog and approach to history are quite terrible.
21 people found this helpful

ExploitationPurveyorReviewed in the United States on March 6, 2018
4.0 out of 5 stars
Consider this an artistic introduction, and reimagining, of the life of a fascinating early 20th Century explorer
Verified purchase
Percy Fawcett's own life was too adventurous to capture in just a feature-length film. I had read Grann's book, from which the movie was adapted, and read the poor reviews of the film, so I expected to be disappointed by it. Having now seen the film, I think it got a bad rap. Perhaps some viewers were expecting something along the lines of the Indiana Jones movies. Instead, the film reminded more of Werner Herzog's Latin American films like Aguirre and Fitzcarraldo, which the Amazon Jungle as something beautiful and forbidding, mystical and deadly. It was no easy feat to film in Colombian jungles, as David Gray points out. Still, I think a certain elegance was captured, even if the life of Percy Fawcett could only be hinted at. I am hoping that the lukewarm reception of this film won't prevent further exploration of Fawcett's life or inquiry into the ruins Fawcett sought out. As Grann and the film both point out, more recent explorations have mapped out extensive evidences of earlier civilizations in what were thought to be uninhabited wilds. Charles Mann's book 1491 and the more recent LIDAR-enabled discoveries in Guatemala point out the need for a reappraisal of the extent of the indigenous presence in the Americas before Columbus.
12 people found this helpful

FarthionReviewed in the United States on May 12, 2019
2.0 out of 5 stars
Not what I expected
Verified purchase
I watched the whole thing, but I kept waiting for a payoff of some kind. It was generally slow and ponderous, accurately depicting Victorian and early 20th century life in Great Britain. As a period piece, it was actually quite good. But as ENTERTAINMENT, not so much.

I should say I'm not into dramas, though if they move along and there are enough interesting things to watch, I've been known to like a few. Among the "interesting things to watch" is a climax of some kind - a payoff for watching the whole thing to get to a glorious or exciting ending. This didn't have ENOUGH excitement, and to be honest, it seemed very ponderous and eventually kind of boring. The ending was, to say the least, anticlimactic and unexciting. In fact, it was kind of puzzling.

From a technical aspect, it's an excellent film. The actors did a marvelous job in their roles. I think the problem is that the story of the main character is, fundamentally, boring in and of itself. Boring people can lead exciting lives, and the man wasn't boring, but in many ways, his life was.

So, overall, based on a rating system of Hated It, Didn't Like It, It's OK, Liked it and Loved It, I didn't like it. Which is a shame given the apparently high production values and quality that went into making it.

So, if you LIKE very well done period piece dramas that essentially go nowhere, this will be a five star rated one for you. Not so much for me.
5 people found this helpful
See all reviews
Back to top
Get to Know Us
Make Money with Us
Amazon Payment Products
Let Us Help You
EnglishChoose a language for shopping. United StatesChoose a country/region for shopping.
© 1996-2022, Amazon.com, Inc. or its affiliates