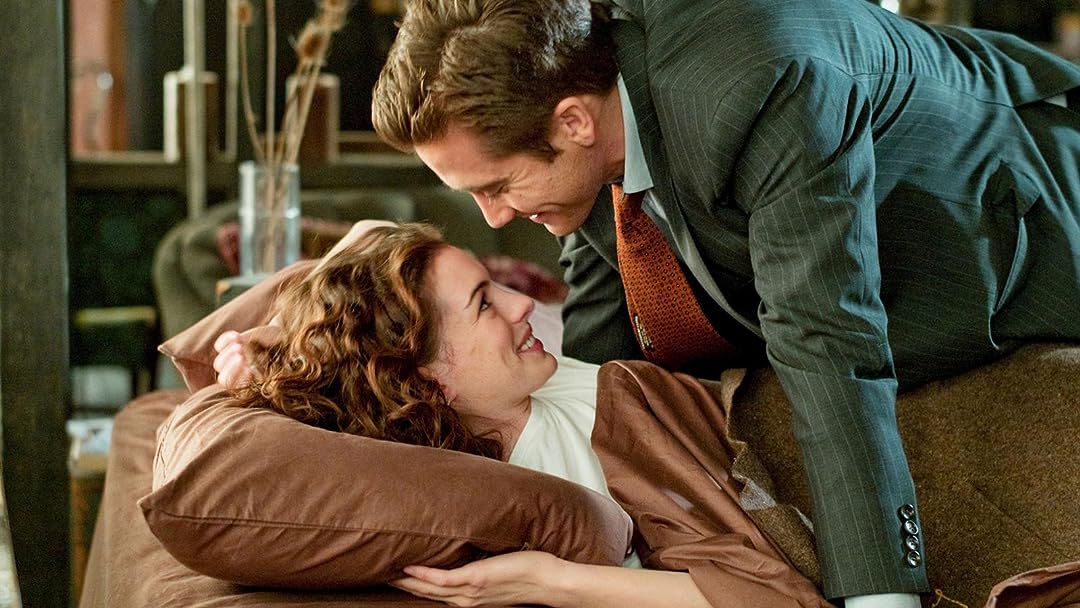 (3,682)
6.71 h 52 min2010X-RayR
A womanizing pfizer drug rep with no sense of direction or responsibility falls in love with a young woman afflicted with parkinson's...

Mike S.Reviewed in the United States on May 28, 2022
4.0 out of 5 stars
Good
Verified purchase
Love and Other Drugs is a romantic comedy about a pharmaceutical salesman played by Jake Gyllenhaal, who is on the verge of getting fired until Viagra comes along and reignites his career. One day while pushing Viagra at a clinic, he meets and falls for Anne Hathaway's character and they start in what is supposed to be an NSA relationship, mainly because she has Parkinson's and does not want to get into a long-term relationship. Of course, feelings develop and the two have to figure out what they want. It has a strong supporting cast including Judy Greer, Oliver Platt, Hank Azaria, and Josh Gad.

For those who get the blu-ray, the A/V quality is very good, and it has a handful of extras, including deleted scenes, character profiles of Maggie (Hathaway) and Jamie (Gyllenhaal), a feature on Jamie Reidy, the real salesman on whose book the movie is based, the theatrical trailer, and a BD live feature on Gyllenhaal's favorite scene.

Overall, the movie is good, but not without its flaws. The movie does at times seem like a schill for big Phrama, with Pfizer getting a ton of product placement, and just kind of glossing over many issues that the drug companies create (which could easily be more of a theme, because of the character of Maggie and her predicament). There is a lot of sex and nudity in the movie, moreso than in other rom-coms. While it does follow some of the traditional rom-com formulaic notes, it does diverge from that at times. While it is definitely not a family-friendly movie, it is worth watching if you are looking for an adult rom-com.

ASReviewed in the United States on May 19, 2019
2.0 out of 5 stars
Tired Story
Verified purchase
This is "Friends with Benefits" meets "A Walk to Remember" but remove all heart, humor, and originality.

An attractive womanizer meets a pretty woman with Parkinson's. Both just want to hook up. Then they fall in love. Then they break up. Then he runs back to her and changes his whole life around.

I found majority of the characters in the movie to be irritating and/or unbelievable. Anne is a great actress but was reduced down to an uninteresting lead. Supporting characters were mostly unfunny and shallow.

I thought the movie was very predictable and while the concept could have been a good one, the execution and writing left a lot to be desired.

BudReviewed in the United States on February 15, 2021
5.0 out of 5 stars
Better than the reviews
Verified purchase
Much better than the reviews on rottentomatoes would have you believe. Acting is excellent, pace and picture are excellent, dialog is dang good, and music is decent. Be aware there is graphic sexual content and nudity, not the kind of glancing mirror shot in the second act, but stuff that would make your mother blush.
10 people found this helpful

J. WestReviewed in the United States on March 20, 2022
5.0 out of 5 stars
"The Best Romance & Comedy Film Ever!"
Verified purchase
I inspire Jake Gyllenhaal and his career as an actor and his role as Jamie, He reminds me of me thinner as a regular guy. He is my second favorite actor (first is Kevin Bacon). And Anne Hathaway is a gorgeous, beautiful and talented actress as the role of Maggie. A handsome pharmaceutical salesman has good luck with other women. But Maggie who has Parkinson's disease changed his life to a serious relationship commitment. I actually love this heartwarming comedy and romance film. Love the sex scenes and full nudity, but for real I like the commitment between Jamie and Maggie. My favorite film. Great performances and roles by Jake Gyllenhaal, Anne Hathaway, Oliver Platt, Judy Greer, Josh Had (Frozen 1 & 2) & Hank Azaria. I recommend this great romance and comedy film.
4 people found this helpful

RioReviewed in the United States on December 26, 2017
4.0 out of 5 stars
good movie, good movie
Verified purchase
ok so... good movie, good movie. storyline was great, jake is a babe but anne will always be mia thermopalis princess of genovia to me.. so i closed my eyes during the sex scenes. i would have given it 5 stars BUT jakes brother in the movie is annoying AF... like not funny at all, so he kind of ruined it for me. he is great as olaf, but as jake's brother he isn't. overall, it was a good movie. also, don't watch Brokeback Mountain before because you will secretly be wishing he leaves anne for heath ledger the whole time.
23 people found this helpful

jimReviewed in the United States on November 8, 2021
3.0 out of 5 stars
Parkinson is a dreadful medical issue on a person life-
Verified purchase
since I know about the ins and outs on how this affliction creates a havoc on a person - most start with what is called ET - tremors to a body part or all at once it shows up - most with this , it comes on slowly and the drugs someone needs to subside some of the movements can be just as bad- te meds that are needed are expensive to come by when you have no insurance - if you are not inflicted with any medical issues, and there are some bad ones worst than PD and of course the way life has to be looked at no matter what, someone out there does have it worst - I an totally humbled that's this is all God has bestowed upon me -
3 people found this helpful

neaReviewed in the United States on July 17, 2021
1.0 out of 5 stars
Just not interested in a political propaganda type movie, not entertainment.
Verified purchase
I don't go to a movie to see real life political issues exploited for my entertainment. I go to watch something that makes me feel better and this movie doesn't do that for me, I tried to watch it twice, both times couldn't so writing this review to remind myself if no one else, that I don't like it.
8 people found this helpful

JCReviewed in the United States on March 6, 2022
3.0 out of 5 stars
Way too much sex
Verified purchase
Ok. They have hot casual sex. That point was made over and over and over, and by the end it had turned into hot love sex. Thought the best part was the older gent telling Jake to end the relationship. His girl won't look like Anne Hathaway forever and if the older gent was right, Jake, "You'll be sorreeee!" It seemed like the most honest part of the film. I suppose actors see nudity as a badge of honor, they all have to do it to prove their bona fides in their profession. I was hoping to see a nice love story, I knew I was going to have to wade through the nudity and simulated sex, repeated to the max, to see said nice love story. I gave it 3 stars for the touching love story, but in the end, how much nudity and sex is required to make a pretty easy point?
2 people found this helpful
See all reviews
Back to top
Get to Know Us
Make Money with Us
Amazon Payment Products
Let Us Help You
EnglishChoose a language for shopping. United StatesChoose a country/region for shopping.
© 1996-2022, Amazon.com, Inc. or its affiliates