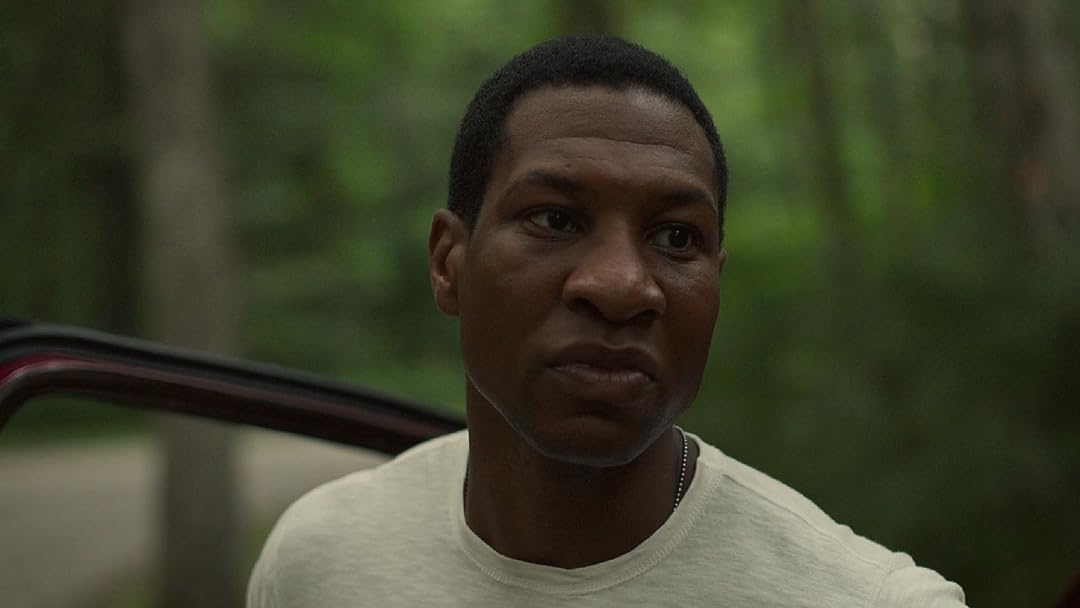 Season 1
(1,169)7.12020X-RayTV-MA
A man's journey in search of his missing father becomes a struggle to survive racist terrors and terrifying monsters.

Ronald T. JonesReviewed in the United States on August 18, 2020
5.0 out of 5 stars
Hooked
Let me just say that while I am aware of H.P. Lovecraft, unlike Robert E. Howard, a contemporary, I never read his work. But like Howard, perhaps more so, Lovecraft was a racist of the highest order, a man so infected with racial animus as to pen a virulence-filled poem degrading black people. Lovecraft Country, an HBO series about an African American army veteran and science fiction enthusiast has been described as a giant FU to Lovecraft. Based on what little I know of the writer, I can hardily agree. Given Lovecraft's sentiment while alive (he died in 1937) if a dead person spinning in a grave were scientifically possible, then Lovecraft should be plenty dizzy by now.

Episode One of Lovecraft Country debuts a solid set of characters, played by a solid cast. We get a fantastical introduction to the protagonist Atticus Black, through a dream sequence featuring winged tentacled creatures and alien vehicles spewing death rays across a battle field where the combatants are a mix of modern and ancient soldiers. Atticus's imagination, fueled by his regular partaking of science fiction and pulp literature, sets the tone for this episode. After a character driven, suspense filled buildup, Lovecraft Country accelerates into an explosive fanfare of action/fantasy scenes. The special effects, like the overall look of the episode, are high end, big budget, block buster quality. No expense was spared in presenting the look of 1950s America down to the most mundane details. Much of the racial atmosphere of the time is conveyed through visuals, from a billboard advertising Aunt Jemima pancakes to quiet contempt or overt hostility displayed by whites toward blacks that require no exposition.

Storytelling the world over has often melded fiction into historical contexts. This works exceedingly well in Lovecraft Country. The episode presents two layers of horror. The first layer are the black characters being subjected to racial violence perpetrated by civilians and law enforcement. The second is their encounter with Lovecraftian monsters. I would expect these elements to be intertwined throughout the season, revealing a great deal more of life in America prior to the Civil Rights movement, while treating viewers to Atticus and his adventures.

Lovecraft Country is an exercise in marvelous storytelling. The actors are brilliant. Jonathan Majors embodies the role of Atticus with flair and distinction. Coutney Vance, an acting veteran brings superb gravitas to his role as Atticus's uncle, George, and Jurnee Smollet is simply mind blowing as the free spirited Letti. She adds fire to every scene she is in. I'm looking forward to future episodes of Lovecraft Country. This series is off to a great start.

Zac ciancarelliReviewed in the United States on August 18, 2020
1.0 out of 5 stars
Not scary, boring, preachy, lackluster. A childish aproch to grown up subjects.
I had high hopes, it being a Lovecraftian horror. I waisted over an hour, being bored and preached to about racism. This is more an atempt to make the audience "woke", then to make the audience experience a lovecraft story.
Why did i need to see a man preforming felatio to another man within the first 15 minutes, how did that help with the story?
Too many part tried to be funny, it took away from the tension and anything scary; so that it wasnt scary, and all the attempts at humor fell short.
Lackluster in horror, depth, mysticism and failed to present an interesting universe.
unrelatable, boring, not scary, a childish aproch to grown up subjects.
After what this country has gone threw, the American people deserve quality!
173 people found this helpful

Paul AllaerReviewed in the United States on August 17, 2020
4.0 out of 5 stars
Potential lethal cocktail of racism and the supernatural have got it going on
"Lovecraft Country" (2020 release; 10 episodes of about 60 min. each) brings the story of Atticus. As Episodes 1 opens, he is having a fantastical dream sequence (turns out he is having a nap while on a bus ride towards his hometown of Chicago). Meanwhile we get to know a married couple in Chicago, Atticus' aunt and uncle. We are sometime in the 1950s. They write travel guides for "safe negro travel". Upon arriving in Chicago, Atticus explains that his dad sent him a strange note: his dad is off to Massachusetts to dig into the family's "secret legacy", without elaborating. Atticus, his uncle, and his childhood friend Leti decide to take a road trip to Massachusetts... At this point we are 10 min. into Episode 1.

Couple of comments: this is the TV adaptation of the graphic novel of the same name a few years ago. I haven't read the graphic novel so I can't comment how closely the TV series sticks to the underlying material. This TV series is very much the brainchild of Micha Green, who developed and produced it (Jordan Peele and J.J. Abrams executive-produced). The series' opening episode turns out to be a harrowing experience as we see America's pandemic racism fully is display, where blacks literally fear for their lives with each interaction with whites. There are several scenes of that in Episode 1 that are beyond description. And then, in the concluding 10-15 min. of Episode 1, there is a healthy dose of the supernatural thrown in here (I won't go into further details, sorry). It all leaves us the viewers with a potential lethal cocktail of racism and the supernatural that will leave you gasping for air at the conclusion of Episode 1. It left me wanting for more, and I cannot wait to see Episode 2 and additional future episodes. The production set and value in this series is absolutely top-notch, and clearly money was not a concern or restriction. Jonathan Majors (as Atticus) and Jurnee Smollett (as Leti) are outstanding in the lead roles.

"Lovecraft Country" premiered this past weekend on HBO, and Episode 1 is now available on HBO On Demand, Amazon Instant Video, and other streaming services. New episodes air on Sunday evening at 9 pm Eastern. By the looks of it, this is going to be a fabulous series going forward. Can't wait to see how it all is going to shake out. If you have any interest in either race relations in this country and/or the supernatural, I'd readily suggest you check this out and draw your own conclusion.
100 people found this helpful

sondra ernstReviewed in the United States on August 21, 2020
1.0 out of 5 stars
Putrid offal
Garbage. Vapid, preachy, predictable, boring, propaganda. Those with mediocre minds will adore this, it feeds their confirmation biases and pop culture internet version of history where America is 400 years old and wasn't founded on the principles of freedom from religious persecution no no no it was found to further the plot of white supremacy and misogyny. I'm cancelling both my prime video subscription AND the rehash network called HBO.
106 people found this helpful

Stephanie C.Reviewed in the United States on August 17, 2020
4.0 out of 5 stars
Did not hold back
SPOILERS: You know how some monster movies make you wait and wait to see the monsters? Not this one. Episode 1 is full of detailed monster scenes. Not to mention racists literally becoming monsters right before your eyes! There is a lot going on here, and they are not holding back in any regard. I'm not a Lovecraft expert, but I do enjoy a good horror show. We'll see how it progresses with episode 2; there is a lot of foreshadowing that I am interested in seeing play out.
84 people found this helpful

CattknippReviewed in the United States on September 3, 2020
5.0 out of 5 stars
Lots of butts hurt in some of these reviews
THIS SERIES IS GOLD! I say keep this series going because the depiction of racism has not changed from decades ago to now. Some if the reviews giving one star, well you can tell where they stand. Someone saying America deserves quality—let me tell you something—We don’t gaf about meeting your “subjective” definition of quality because the series makes you uncomfortable. Deal with it. THIS SERIES IS GOLD!
63 people found this helpful

MEOUSReviewed in the United States on August 25, 2020
1.0 out of 5 stars
HBO AND MORE PANDERING BORING WRITING. HBO LOST THEIR TALENT
Okay so if you loved Game Of Thrones, then don't watch this garbage or Watchmen. Very boring and predictable characters and emotionally money grabbing plot devices. They got the worst writers to make race card into a writing tool. Listen. I watched Hotel Rwanda. I cried. That was real. But this is so forced and contrived, just like the new Watchmen series, that it is wholly based on exactly that one plot device. "These guys are racist, that is bad, get them." With zero interest in true story telling. Just mindless pandering. This and Watchmen are just like poorly written soap operas with boring characters and a constant desperate moral message hammered into your head over and over again. Not any kind of tribute to lovecraft and i have read every single thing he has ever written. Even if they wanted to modernize it, kind of like John Dies At The End then that would have been fine. But there was less than minimal effort put into this or Watchmen. People just like racism. It is a very popular subject. This is the writing equivalent of an ambulance chasing lawyer. Just HBO and these o so extremely desperate efforts to cash in on the craze. If I wanted politics i would watch politics. If I want good sci fi horror I will not be watching this. They could have had the brains to make it a sci fi comedy horror. But they didn't have the class. If I could give it less than 1 star i would.
66 people found this helpful

Amazon CustomerReviewed in the United States on July 3, 2020
5.0 out of 5 stars
This looks very promising. Can't wait to see it.
Grew up reading Lovecraft and loved the cosmic horror, doomed plotlines, monsters, Cthulhu mythos, etc.. Found out only a few years ago H.P. was a racist, and so sorry to hear that. This feels like an excellent way to honor his great works while still addressing the racism, to be more properly all-inclusive so everyone can enjoy the Cthulhu experience. If it plays out the way I hope, then kudos to this production and to Mr. Peele for such a visionary and (hopefully) unifying endeavor, in a time when EVERYTHING else feels so tragically divisive.
53 people found this helpful
See all reviews
Back to top
Get to Know Us
Make Money with Us
Amazon Payment Products
Let Us Help You
EnglishChoose a language for shopping. United StatesChoose a country/region for shopping.
© 1996-2021, Amazon.com, Inc. or its affiliates