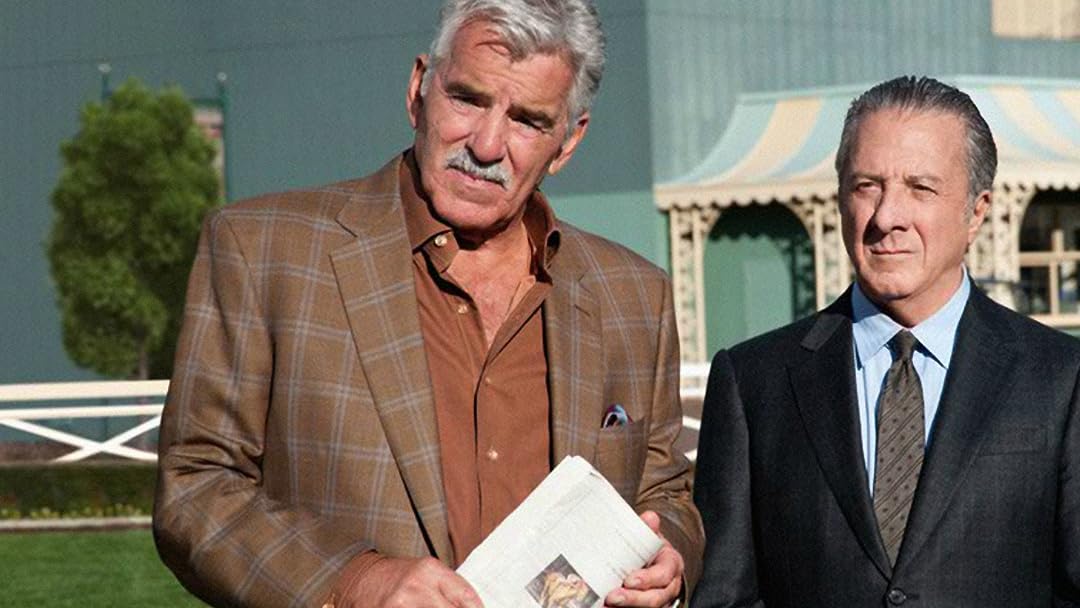 Season 1
(2,085)
7.52012X-RayNR
Ace Bernstein (Dustin Hoffman) and his longtime chauffeur (Dennis Farina) craft a complex plan to reverse the sagging fortunes of a California racetrack in Season 1 of this provocative HBO drama series.

Daniel CascaddanReviewed in the United States on January 6, 2016
5.0 out of 5 stars
A brilliant show killed by PETA
Verified purchase
What a fabulous show! I almost did not watch it, thinking it would just be another dark, horribly violent show about criminals. But the criminals were mostly well-behaved (not to give too much away). It was primarily a show about horse racing. And that brings me to one of my favorite aspects of this show. They did not treat the audience like morons, explaining everything. I know nothing about horse racing, and it was nice to learn from contextual inference instead of having it explained with dialog that would never really occur between people who know what they are talking about. The thing that is really sad about this show is that the PETA people shut it down. We will never see the second season that was already being shot, because a couple of horses were injured, just like in real horse racing. I guess the PETA people would shut down the real thing if they could, but shutting down this exceptionally wonderful show was the most they could accomplish, so that was their target. What a shame.
42 people found this helpful

VonSnarkoReviewed in the United States on May 26, 2016
5.0 out of 5 stars
Lovable Losers
Verified purchase
David Milch (Deadwood) is a brilliant writer and a very troubled man. It has come to light that he has battled mightily with gambling addiction and may have lost tens of millions of dollars at the track and in the poker parlors of Los Angeles. So it is somewhat startling to see his creation "Luck", a love letter to gambling, play out across nine of the best hours of television ever produced. Milch may have been exorcising his personal demons but it isn't hard to see how deeply he feels about the worlds of horse racing and card rooms and we all benefit by getting an insider's tour.

Of course it helps that his partner and co-executive producer is none other than visual master Michael Mann (Heat, Miami Vice), a filmmaker who has made a career out of portraying rough men in dangerous circumstances through a highly stylized lens. The potent combination of Mann's lush visual style and moody music paired with Milch's quasi-Shakespearean by-way-of Raymond Chandler dialog has resulted in a stunning and highly original season of television for HBO.

Dustin Hoffman's performance as Chester "Ace" Bernstein, an aging gangster with a chip on his shoulder is one for the ages. Like Tony Soprano, Ace is a gangster we can care about. The rest of the ensemble cast is top notch including a standout performance by actual Kentucky Derby winner Gary Stevens as Ronnie Jenkins, a burnt out and bitter jockey attempting to manage his alcoholism while staging a career comeback.

There haven't been many television shows about horse racing. And there may not be again, since Luck was driven off the air after a single season by an intense backlash driven by PETA and other animal advocacy groups after several horses died in the course of producing the show. I don't know if this was the result of any negligence or was typical of what happens anyway in the horse racing circuit and the show was an easy target. Whatever the reality, the scrutiny was too much for HBO and they cancelled the series. With a name like Luck, they were pretty much asking for trouble.

Fortunately the story arc from episode 1-9 feels complete and not like a show that was abruptly cancelled. I rank it up there with the very best of TV's second golden age.

Michael HarveyReviewed in the United States on May 29, 2017
5.0 out of 5 stars
Luck had ill-deserved bad luck.
Verified purchase
One of the more interesting character-driven dramas I've watched in quite some time; starring Dustin Hoffman, Nick Nolte, Jill Hennessey, and an otherwise stellar cast, directed by Michael Mann, cancelled after 1 season courtesy of PETA.
"Luck" is a very subtle drama, with great character depth, about horse-racing, the gaming industry (including Native Americans), gamblers, jockeys, gangsters, venture capitalists, and the cruelty of the sport and how it seems to make those around it equally cruel to each other.
The subtlety of the acting in this short-lived series was astounding; the cinematography - stunning; filming of the horses and other barnyard animals and their relationships to humans was poignant. There were a few scenes in which the horses were interacting with the humans that was nothing short of 'spiritual' (for lack of a better word).
If you appreciate great character development, filming, direction, and subtle plot-lines, you'll appreciate this short-lived HBO series.
15 people found this helpful

bruceXedwardsReviewed in the United States on June 26, 2015
5.0 out of 5 stars
Great TV Series
Verified purchase
You'll like this, if you're looking for an uncommon story setting. There are not many TV series about horse racing. Yes, the dialog is hard to follow as the characters use industry-specific terminology. It became easier when I looked up a few phrases like: horse racing handicap, claiming a horse,... Some characters have distinct accents which is realistic as there are many immigrants in the industry. Nick Nolte's scruffy old character mumbles like someone who's been on a horse ranch training horses, drinking, smoking, and doing what a ranch hand does.

The horse races felt realistic and exciting to watch. I liked the cinematography skills and music used to make the race suspenseful.

The story is told slowly. We learned about the characters over several episodes. But the story is not boring as every character is unusual and the scenes are introduced in a creative way. This is not for the viewer who insist on fast-paced action scenes, but one who listens for the details in conversations and likes studying personalities.

The TV series was cut, so episode Nine ends with unresolved conflicts between mob bosses. I don't know if Nine was meant to be the conclusion, but it was still a dramatic, satisfying and positive last episode.
One person found this helpful

Douglas HopkinsReviewed in the United States on October 15, 2015
5.0 out of 5 stars
Dustin Hoffman's bemused shuffle ...
Verified purchase
Dustin Hoffman's bemused shuffle through his extended movie life finally matches a perfected characterization. Luck is a display case of characters, from start to finish. It builds beautifully, defining people whose heads you are living the interior, immersed. There is a slow rise, then rides steadily on increasing complexity, engaging with plot glue. Meanwhile, back at the numbers factory, focus group management HBO foolishly drops the series on a whim. Strong word of mouth the show developed. Dustin: take this package down the street, to one of the new, progressive, technology-based creative originators, they'll jump on it.

My only complaint, useless effort, is the polluted language, the cursing, by now a fixed Hollywood habit. It isn't necessary. It doesn't make the actor's presence any cooler or more authentic: actions speak louder than dirty mouths, here over the top.
One person found this helpful

Marjie, Mother of 9Reviewed in the United States on August 26, 2015
4.0 out of 5 stars
Complex, good show
Verified purchase
The first episode of this show started out a little slowly. It is a complicated show, with many different characters who had to be introduced. After a short while, the whole thing clicked, and we began to see how all of these seemingly random, down-at-the-heels people who are involved at the edges of the horse racing industry at this southern California track, are intertwined. I was amused to see a cameo shot of Bob Baffert in one of the episodes. It was disappointing to learn that only one season of this show was ever made, but given the deaths of 3 horses during the making of this show, it's understandable. Still, a very good show with a satisfactory conclusion. Dustin Hoffman, Nick Nolte and Jill Hennessey shine throughout.
4 people found this helpful

infopleaseReviewed in the United States on September 25, 2015
5.0 out of 5 stars
Very realistic look at horse racing. Excellent cast.
Verified purchase
We do not have HBO so I had never watched Luck. I loved the series. The horse racing was exciting and the cast, especially Dustin Hoffman and Dennis Farina, were wonderful. The motley group who purchased a horse together was interesting and I'm sure were representative of a lot of people who frequent horse tracks. I was thoroughly enjoying the series and imagine my surprise when I found there was not a second season. It had been renewed and then cancelled due to Peta outcries about cruelty to animals. I would love to see that group disbanded. Lots of people lost their jobs and from what I read the animals were well maintained. There were some casualties but I'm sure no more or less than in real horse racing.
I was so looking forward to a second and third season. Shame on the people who let Peta dictate to them and cancelled the series.
One person found this helpful
See all reviews
Back to top
Get to Know Us
Make Money with Us
Amazon Payment Products
Let Us Help You
EnglishChoose a language for shopping. United StatesChoose a country/region for shopping.
© 1996-2022, Amazon.com, Inc. or its affiliates