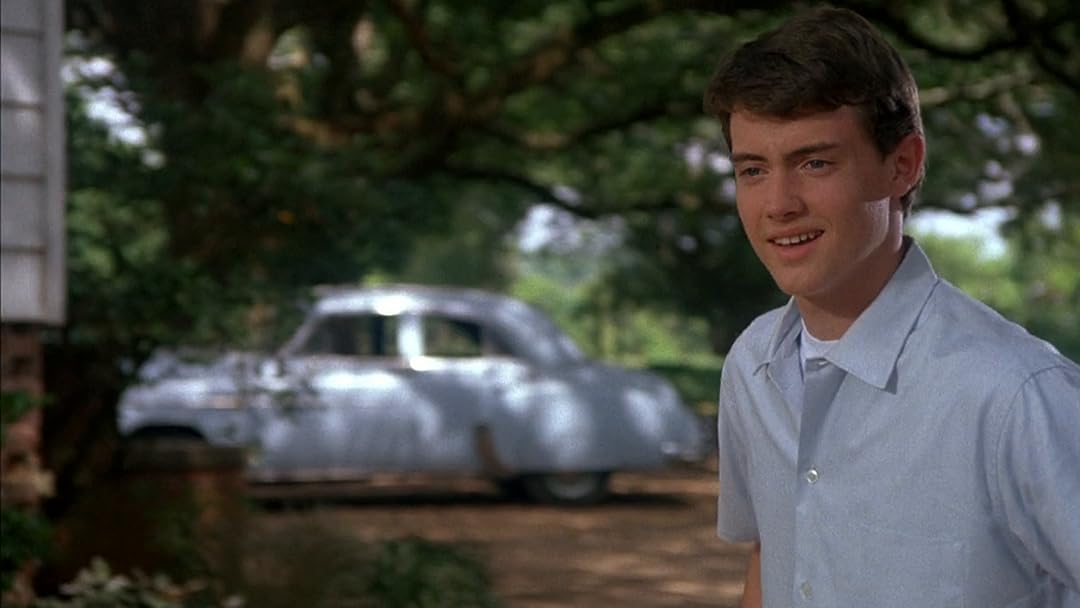 Man in the Moon

(1,752)
7.41 h 39 min1991PG-13
Fourteen-year-old Dani and her older sister Maureen have always shared everything. When Court Foster moves in next door, the sisters become rivals as Dani experiences her first feelings of affection and Maureen finds the true love she's longed for.

RandyReviewed in the United States on March 13, 2019
4.0 out of 5 stars
Great, well-acted film with an ending that will either greatly satisfy or deeply anger you
Verified purchase
I need to start off by saying that this film is wonderful. It has a great aesthetic and I've always loved movies set in this era. There's something so whimsical and charming about this film, and it has a sense of whimsy and nostalgia that you'd be hard-pressed to find anywhere else. As I said, well-acted, well-written, and a whole lot of fun. It's a great exploration of love and loss.

HOWEVER, the ending filled me with a fury that few other movies ever have. (Spoiler Alert Here) I was on team Dani, not Maureen, so when Maureen strikes up a relationship with Court even after she knows how much Dani cares for him, my heart was shattered. Maureen's betrayal hurt me more than even Court's death did. I didn't think that Dani should have forgiven Maureen so easily, or at all for that matter. I felt like I was manipulated into sympathizing with Maureen when I personally didn't think she deserved my sympathy after performing such a huge betrayal of her beloved sister.

Other than the very end, the rest of the movie is completely enjoyable, and a must-watch for fans of nostalgic, 50s, coming-of-age pieces.

melliebReviewed in the United States on March 21, 2019
1.0 out of 5 stars
This movie is a dirty trick!
Verified purchase
Shame on me for not doing my homework, but what a rotten trick to make all but the last fifteen minutes of this movie all fun and games, and then a gut wrenching tragedy pops out of no where. A little warning would have been nice. I do not recommend if you are looking for something cheerful. That said, Reese Witherspoon was a great actress from this, her very first movie - so there is that redeeming aspect. As for me, I wish I would have stayed away.
15 people found this helpful

Rick KochReviewed in the United States on March 27, 2019
5.0 out of 5 stars
Everybody Should See this Gem of a Film
Verified purchase
This is a wonderful coming-of-age movie from the director of To Kill a Mockingbird and Summer of '42.

The movie starts out quite ordinarily with a 14-year-old girl who is smitten by the new boy who moves in next door. But then, well, life happens -- real life. I would be spoiling the movie to tell you exactly what takes place, but suffice it to say that it all feels very real, and you will feel for every character and every heartache along the way.

Khristine JacksonReviewed in the United States on August 14, 2020
5.0 out of 5 stars
A gem
Verified purchase
First of all I have seen this movie some years ago..Or maybe a decade so..? Second the Cast,Location and Script were stellar.. Third the character Reese Witherspoon plays reminds me of myself when I was a little girl. Yes I did have a crush on a much older boy like she did. Except my sister's were in their 20's by the time I was a 14 year old girl. Lastly when you are in love so young..You really assume that you are in .....LOVE..! Heck if a boy is that " intoxicating" that would make me abandon my Elvis Presley poster's...well gol-lee ...!! You bet I'm gonna chase him around like a "bumble-bee" looking for a nest. The film was shot on location in the great state of Louisiana.. Sam Waterston is such a well mannered and loving "Hot Dad".. while Tess Harper plays the homely mom..like other women of that era... Having babies on top of babies..!! The high school boyfriend of the older sister is the grandson of "Hollywood" royalty ..Bentley Mitchum is the grandson of the late-great Robert Mitchum.. Let's not forget the "cutie pie" played by actor Jason London.. did you know that he has a "TWIN" brother who looks just like him..? Jeremy London who is also an actor...identical ...how about that? This is a true coming of age movie and every girl...can relate ..
2 people found this helpful

JanneReviewed in the United States on June 9, 2020
2.0 out of 5 stars
Didn't draw me in
Verified purchase
Eighteen minutes in and I still don't have a clue what this movie is about. I know that a teenage girl likes Elvis Presley a lot and vexes her family members for reasons that are not made entirely clear other than that she likes to do her own thing. I know that her older teenage sister is a paradigm of adjustment to adolescence. I know that the tan line on Dani's bottom is decades ahead of its time (even bikinis of that era were not hi-cut). And I know that when she emerged from the water in her nude scene she was holding some sort of cloth against her chest, a silly and confusing error. These petty mistakes would not have bothered me if the movie itself didn't seem petty and insignificant. Reese Witherspoon was just a youngster in this debut movie and it was certainly not her fault that her southern accent came and went while the rest of the characters sounded like the Beverly Hillbillies. These little things didn't break the spell of this movie for me because there was no spell to be broken. Thanks to reviews that offered no spoiler alerts, the ending was telegraphed, and I gather that a lot of people were unpleasantly surprised. I don't like surprises -- even pleasant ones -- so I'm not going to let myself be curious enough to see it to the end. I'm giving this movie 2 stars. One star is for the eighteen minutes I endured and the other star is for the benefit of the doubt.
3 people found this helpful

Butterflymom54Reviewed in the United States on August 15, 2019
5.0 out of 5 stars
Sad but poignant coming of age story
Verified purchase
SPOILER REVIEW AHEAD:
This movie is the story of two sisters who love each other. A boy comes between them and a tragedy occurs. They live in the country with their Dad, pregnant Mom and little sister. Reese Witherspoon plays the 14 year old who while swimming in a pond, meets a 17 year old boy who just lost his Dad to an accident. She develops her first crush. He likes the 14 year old but after meeting the older sister, he develops deep feelings for her instead. I would not call any of these feelings or emotions anything other than lust or a crush, but all of them lead to a division between sisters. The family tries to weather their loses and somehow find a way to forgive and love each other again. It is a sweet story but complicated. Worth a view and relatable. One scene is very scary. This is not a kids movie. Young adult maybe. Someone else's story or vision. Love Tess Harper here. She is the reason I watched it as well as Sam Waterson.
One person found this helpful

Angela vReviewed in the United States on May 7, 2021
5.0 out of 5 stars
The best of storytelling
Verified purchase
If you are in the mood for a very engaging and moving young love story, with a bit of heartbreak in it, this is a great film to watch. It is one of the most beautifully told stories I have ever watched. I can't write nearly as well as Roger Ebert, the famous critic, so I would recommend reading his review of the film. All of the characters are well-acted. It is a story where you are drawn into the memories (for most of us) of the idealism of young love. The characters are so fresh and new and in the moment. It's one of those rare movies where you don't find yourself saying, "I know what's coming". Or at least you don't see it coming too far ahead. You just enjoy the story. The musical score is unobtrusive and pleasing. If you grew up in the country on a farm, the film may be even more poignant. The scenery and settings all seem very realistic. This is not a fast-paced action film in any way, but it is an emotional delight.
One person found this helpful

DCPReviewed in the United States on January 31, 2017
5.0 out of 5 stars
Man in the Moon
Verified purchase
I enjoyed the film. Good story about growing up in rural America, reminded me of younger days and good family values, sad ending though but such is life...I like the way the parents handled just about everything with their girls and the young man in their lives.
17 people found this helpful
See all reviews
Back to top
Get to Know Us
Make Money with Us
Amazon Payment Products
Let Us Help You
EnglishChoose a language for shopping. United StatesChoose a country/region for shopping.
© 1996-2022, Amazon.com, Inc. or its affiliates