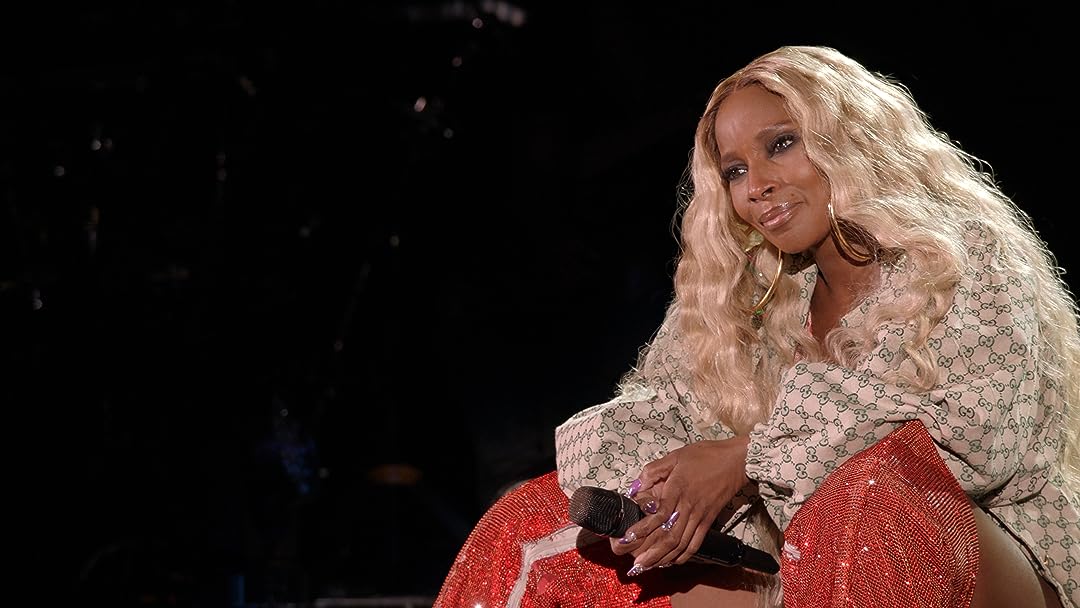 (914)
6.51 h 22 min2021X-RayHDRUHDR
Mary J. Blige set the music world on fire with her trailblazing 1994 LP “My Life,”. In Vanessa Roth’s documentary Mary J. Blige’s My Life, the singer, rapper and actress reveals the demons and blessings that inspired the record and propelled her to international stardom. She celebrates the 25th anniversary of her most influential work by performing the album live for the first time.

Craig OwensReviewed in the United States on June 25, 2021
2.0 out of 5 stars
Superficial Promo Film Made Specifically For Fans
Verified purchase
I admit that I've never heard of Mary J. Blige nor have I heard any of her songs before watching this documentary. That being said, I wanted to give this doc a try. After all, I didn't know who J. Balvin was either when I watched "The Boy from Medellin." But at least with THAT documentary, I got a sense of who he is and what drives him to success. I didn't get the same clear picture in "My Life," nor was I emotionally moved by Blige's story. Instead, the film paints her biography with too broad of strokes that made it impossible for me to distinguish her from other well-known music artists -- like Tina Turner or Whitney Houston. She talks of pain but rarely goes any deeper than her saying that she was in a "dark place" and that she didn't always believe in herself. The film is also repetitive with everyone saying that she wrote and sang from her inner pain and that her music inspired people to not give up on life. But these hooks without more substance make for a boring film and, quite frankly, it makes her come across as generic. What star hasn't had similar problems? It seems as though a lot of potentially inspiring details are either left out, glossed over...or the filmmakers assume that the audience already knows everything. And what little bombshells (if you can call them that), that are mentioned, are brief and quickly dropped without expanding on them. Blige seems like a nice person and she is unquestionably talented. I also liked the interviews of other folks and the animation is a nice touch. That being said, I would have liked to have known more about how her music was produced and how she (and her music) was packaged and marketed. I would have loved to have heard a few embarrassing/humorous stories that highlighted the early years of her stardom or career setbacks (if any). How much booze and drugs did she take? And for how long? Was she a diva when she was younger? How so? Examples? What other relationships did she have other than the one discussed in the film? I'd love to know how she handles her business career. Does she have a manager? Agent? Product line? What awards has she won and what were her Grammy wins for? Has she done any acting? Dancing lessons? How exactly did she get her facial scar? At what age? What is a day in the life of Mary J. Blige really like? There is SO MUCH left out of this documentary that I can't recommend it to those who don't know much about her. I'm sure that if you love her, it won't matter. But this movie feels like it should be a DVD that comes with a boxset of her music rather than a chance to really get to know her.
66 people found this helpful

JillReviewed in the United States on June 25, 2021
5.0 out of 5 stars
It's Mary J Blige
Verified purchase
This is AMAZING!!!! Mary put her heart into this documentary!! This is the best documentary of 2021 that Amazon has released!!! The fact that you can play Mary and know every single word; it doesn't matter what year or time...you can always play Mary she will never be put out of rotation. To see the vulnerability, it shows that Mary sings from the soul; Mary is one of the few artists that my mom and I love!! Thank you for sharing. As a fan I am so excited and proud. I will be watching this many more times.
Thank Mary for being yourself and taking us along
32 people found this helpful

SBReviewed in the United States on June 25, 2021
5.0 out of 5 stars
IT'S MARY- ENOUGH SAID!!!
Verified purchase
This was filmed perfectly. The animation was well-done. And ...IT'S MARY and she is always beautifully flawed, authentic, and unapologetically true to herself. That's why we love her and her music.
Thank you for sharing your life, gifts, and talent with us, Mary! You are appreciated for writing the soundtrack to a lot of our lives.
On to watch this again...waiting for the next live show!
31 people found this helpful

QueenReviewed in the United States on June 25, 2021
5.0 out of 5 stars
ICON Living
Verified purchase
Mary initially changed the narrative of being an artist. Before her artists image had to be PERFECT in every aspect of the word which made it extremely hard for fans to connect viscerally.

Her rawness was so relatable to people of all ethnic groups especially young people in that era. We wore the stripes of WINNING wars within our own community rather that be fighting abuse inside or outside the home. When I say 'winning' I mean surviving another day.

She verbally expressed every emotion soldiers of this type of combat experienced. While being submerged under physical and mental warfare we don't dare say it out loud for fear of new unfamiliar attacks.

Her testimony through music was a passageway used for so many of us to escape if only for a moment.

ParatopiaReviewed in the United States on June 26, 2021
2.0 out of 5 stars
Doesn't Do Much
Verified purchase
I've always liked Blige, and this documentary won't change that fact. I feel most entertainers in the arts are a narcissistic bunch no matter how you slice it. All eyes are on them, and they crave the attention. Blige may not have started out that way, but she sure seems like it today by the looks of this documentary. From recent photo shoots to reactions to her fans who spill out heartbreaking stories to her, Bilge seems disingenuous in her reactions to them. It wasn't poor editing either. Blige seems to have wheeled herself into the niche of a pampered superstar who still struggles with self–esteem and uses that as a vehicle to propel her motives and actions.

Maybe she is still is in it 'for the fans', but with this documentary, there sure was a whole lot of histrionics and crocodile tears that anyone with half a brain could see through. Playing for the camera can only be done by top–notch actors.

If you watch this film and are a fan, please be objective. Notice the IMDB rating versus Amazon – that says a lot right there.
23 people found this helpful

EliteDvaReviewed in the United States on June 25, 2021
5.0 out of 5 stars
I just love MJB!!!
Verified purchase
I felt every bit of this because I have listened to Mary ever since I was a 10 year old girl growing up to fast back in 1991. I absolutely love her! Great job everyone that had a part in making this documentary come to life!
18 people found this helpful

lgamazonReviewed in the United States on June 25, 2021
5.0 out of 5 stars
Heartfelt and Powerful at the Same Time
Verified purchase
The story behind the album will bring you to tears and also to your feet! MJB is like no other.
19 people found this helpful
See all reviews
Back to top
Get to Know Us
Make Money with Us
Amazon Payment Products
Let Us Help You
EnglishChoose a language for shopping. United StatesChoose a country/region for shopping.
© 1996-2022, Amazon.com, Inc. or its affiliates