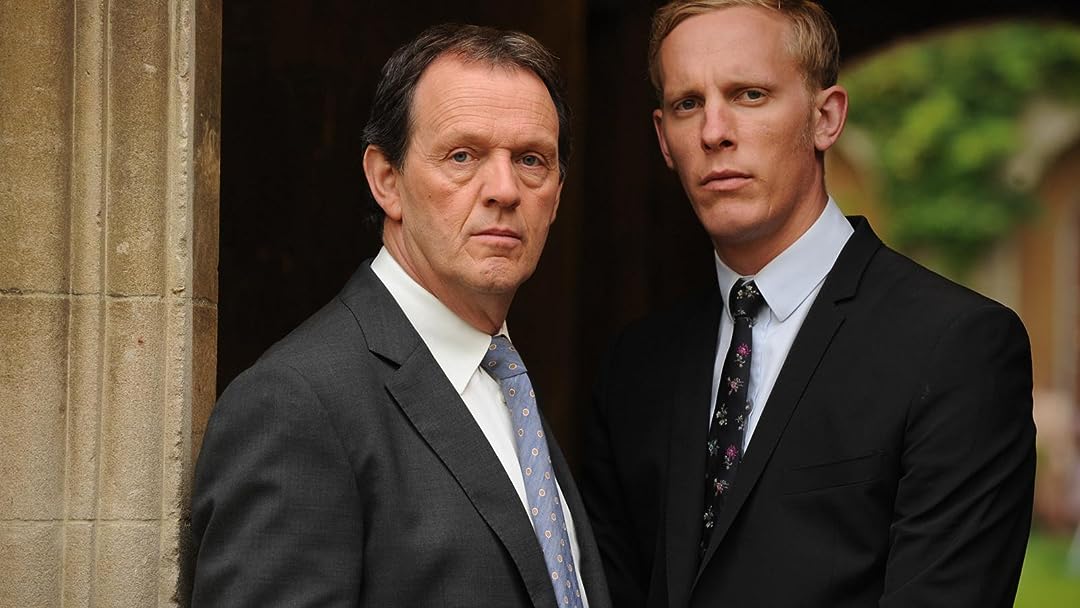 (4,861)
8.12008X-RayTV-PG
Five years after the death of his mentor, Inspector Morse, Lewis is now an inspector himself and back at Oxford. He's teamed with a new sidekick, Detective Sergeant James Hathaway, and he's anxious to prove himself.

Included with PBS Masterpiece on Amazon for $5.99/month after trial

Watch with PBS Masterpiece
Start your 7-day free trial
Add to
Watchlist
Redeem a gift card or promotion code
By ordering or viewing, you agree to our Terms. Sold by Amazon.com Services LLC.
Write review

Z HayesReviewed in the United States on April 8, 2012
5.0 out of 5 stars
DS Lewis of Inspector Morse gets his own show, and it's great!
Verified purchase
Note: Amazon first made Series 3&4 available via streaming (free for Prime members) several months ago, and another fan of the series made it known to me that Series One and Two are now available via streaming (free for Prime members).

Having watched all of the Inspector Morse episodes, I can see the evolution of Lewis' character (brilliantly portrayed by Kevin Whately) from a diligent albeit lowly sergeant under the guidance of the amazing Chief Inspector Morse (John Thaw) to a confident, outspoken, yet still down to earth DI who now has his own underling in the form of the intellectual, gifted DS Hathaway (Lawrence Fox).

In Series One, there are three riveting episodes set in Oxford:
Whom the Gods Would Destroy - When an Oxford don's former classmate is found murdered, he comes under suspicion, but Lewis and Hathaway need to tread with care given the sensitive nature of the case.

Old School Ties - Lewis is not happy when he is assigned "babysitting" duties with Hathaway. The celebrity in need of protecting is a reformed criminal turned celebrity author. When an attractive young student turns up dead, there are many suspects to choose from - her circle of college mates who all seem to be rather ambivalent in their feelings toward the girl, and also the celebrity himself. When the celebrity himself ends up murdered, Lewis' past comes back in the attractive form of his ex-schoolmate and ex-girlfriend, who turns out to be the widower/ agent of the dead man.

Expiation - An apparent suicide of a North Oxford housewife perplexes Lewis. There was no suicide note, and the dead woman's life seemed too perfect to be true. Lewis and Hathaway dig deeper to get at the truth.

I have become a fan of Inspector Lewis and his devoted sergeant Hathaway. Lewis may not be Morse, but this series is charming in its own right - there's a high sense of atmosphere, and the scenic Oxford setting makes it a series of high aesthetic value. The cinematography and score are beautifully done. The plots are not as intricate as those in the Morse series, but I love the wonderful chemistry between Lewis and Hathaway, not to mention the lovely pathologist Hobson. I have watched up to Season 4, and am looking forward to future seasons.

MeepReviewed in the United States on January 21, 2014
5.0 out of 5 stars
A brilliantly lovely series
Verified purchase
This is a lovely, lovely series. It is absolutely beautiful, to start with. Shot in and around Oxford the setting is magical, and the lighting, camera work, picture composition….everything is of the very finest quality. I have just watched all the episodes in one huge chunk (sick in bed for a few days) and plan to watch them all again many times just to look at them. Then, the acting is top notch. The actors build the depth of the characters subtly, and the relationships between the characters grows and deepens with the series. It's a thrill to watch them work, and watch the skill with which they create the world of Inspector Lewis. Then the writing. It's sprinkled with quotes, literary references, subtle jokes, and suggestions for future reading which I look forward to with great delight. This is only after having been through it once, mind you, I look forward to watching all the shows again because I am sure there is more to be gained with each watching. This series is as beautiful as Midsomer Murders but I like it better. For one thing, there are no dead animals, a fact which I greatly appreciate. In fact, while it's clearly a murder mystery show and some really likable and attractive characters get killed in some of the episodes that I really, REALLY wish hadn't (I'll probably never get over that poor girl who died midway though the episode about the professor who's dating video got outed on the internet, for example) in general they don't focus on the violence for the sake of it and I would say that it's a kind show to the viewer-such a rare thing that I had to mention it as well. I can find nothing ill to say about this show. I would be deeply surprised to learn that anyone involved in the making of this show is not an absolutely wonderful human being, and the best at what they do professionally as well. A true, rare, and exquisite gem of a show. Please do yourself a favor and don't miss it, it's comfort food for the heart.
3 people found this helpful

JDReviewed in the United States on April 30, 2022
5.0 out of 5 stars
Mystery
Verified purchase
I bet you can figure out who did it until it is revealed. Great series

Vennie AndersonReviewed in the United States on March 2, 2016
5.0 out of 5 stars
Excellent TV in its own right and perfect for those who love "Inspector Morse".
Verified purchase
If you have never watched the "Inspector Morse" series. I suggest you watch the entire series before embarking on "Inspector Lewis". If you have watched the "Morse" series, then by all means dive into this sequel series, which is set a few years in the future after the end of the "Morse" series, and fits seamlessly into the extended storylines. Inspector Lewis (formerly patient and long-suffering Sargent Lewis) has been promoted. He experienced tragedy, but came out the other side with his basic good nature intact. His expertise at crime detection has developed--after all he had the best mentor a young Sargent could possibly ask for--and his understanding of human nature (which was always better than Morse's) enables him to relate to victims and suspects in an entirely different way from Morse, the eternal curmudgeon.. In addition, he continues his education in the classics and general knowledge, yet never losing sight of his "northern origins". He is more polished, but still our "Robbie". Hathaway, Sargent partner to Lewis's Detective Inspector, is a well educated former seminary student with a somewhat mysterious past and a dry sense of humor. It took me a couple of episodes to warm up to Hathaway, but I realized he was the perfect partner for Lewis, similar in many ways to the DI's mentor. Their partnership grounds the series as did that of Lewis and Morse in the past. This series can stand on its own as very good television; however, watching it after "binge-watching" the prequel is proving to be a delightful experience.
4 people found this helpful

Glenda NunesReviewed in the United States on May 20, 2022
3.0 out of 5 stars
Love it
Verified purchase
Love it

LinnReviewed in the United States on September 26, 2016
5.0 out of 5 stars
Gotta love Lewis and Hathaway!
Verified purchase
I saw this series when it was originally shown on PBS Masterpiece Mystery a few years ago. I loved Kevin Whately when he played Sargeant Lewis in the outstanding "Morse" series which ran so long on PBS until the death of John Thaw. I heard that when the "Morse" series ended, Kevin Whately announced that he was done playing the "Sargeant Lewis" character and would not consider ever playing him again. Whoever convinced him to reconsider his decision did us all a huge favor. Paring Whately with Laurence Fox, yet another member of the hugely talented British acting Fox family was a stoke of genius. Making Kevin Whately the lead as "Inspector" to Laurence Fox's :Sargeant" character was a touch of deja vu with Morse, but sort of in reverse. Now "Lewis" is the "Inspector" and giving the orders to his highly educated subordinate, "Sargeant Hathaway." Hathaway is the brooding, intelligent character much like Morse and I found their partnership utterly delightful, especially since there are occasional references to Morse in the dialogue. I also loved watching for those hard-to-spot cameo appearances by the author of the original "Morse" books, Colin Dexter...a la Alfred Hitchcock...:-). Even if you watched the series when it first came out on PBS, it's definitely worth watching again. "Lewis" and "Hathaway" are quite a team!
30 people found this helpful

Diane M.Reviewed in the United States on February 27, 2021
5.0 out of 5 stars
Wonderful Who Done It Series
Verified purchase
During the years this was on television I worked and was too tired to watch but one or two of these. Love being
able to see the whole series! While this is a review of Season One, I dare you to be able to stop there. Each episode
is like a giant jigsaw, very hard but fun to try and figure out before the ending reveal. They are all set around Oxford
University and the relationship between the two detectives is also fun to see develop. If you are an Anglophile like me you can't miss this.

HerbdocReviewed in the United States on May 17, 2015
5.0 out of 5 stars
Life After Morse
Verified purchase
"Inspector Lewis" is a series that turns the Morse episodes on its head, with the Cambridge-educated Hathaway as the inspector's sergeant, & Lewis as the plodding copper & boss. Sweetly, there are references to Morse & nods to what he taught Lewis about the intellectual underpinnings of Oxford society, in some episodes. But to his credit, Lewis, now a DI himself, has come into his own, outside of Morse's shadow and he cuts a very effective, albeit more common man, figure of his own. The counterpoint of the Cambridge-educated Hathaway makes for some light moments, as crimes are solved & it is always some small detail that Lewis realizes, usually unconsciously at first, that bubbles up in his awareness & ultimately proves pivotal in the resolution of the case. They are both self-contained men with no social lives, for whom work is their only outlet & occupation. Their female boss gently tries to get them to reveal more of their inner worlds to each other & we're fed tantalizing tidbits of Hathaway's past & present & shown the barren wasteland, that is Lewis' world. as a widower after his wife is killed in a hit & run accident. A good pair, written with great finesse, creates a pleasing series that is well worth your time.
One person found this helpful
See all reviews
Back to top
Get to Know Us
Make Money with Us
Amazon Payment Products
Let Us Help You
EnglishChoose a language for shopping. United StatesChoose a country/region for shopping.
© 1996-2022, Amazon.com, Inc. or its affiliates