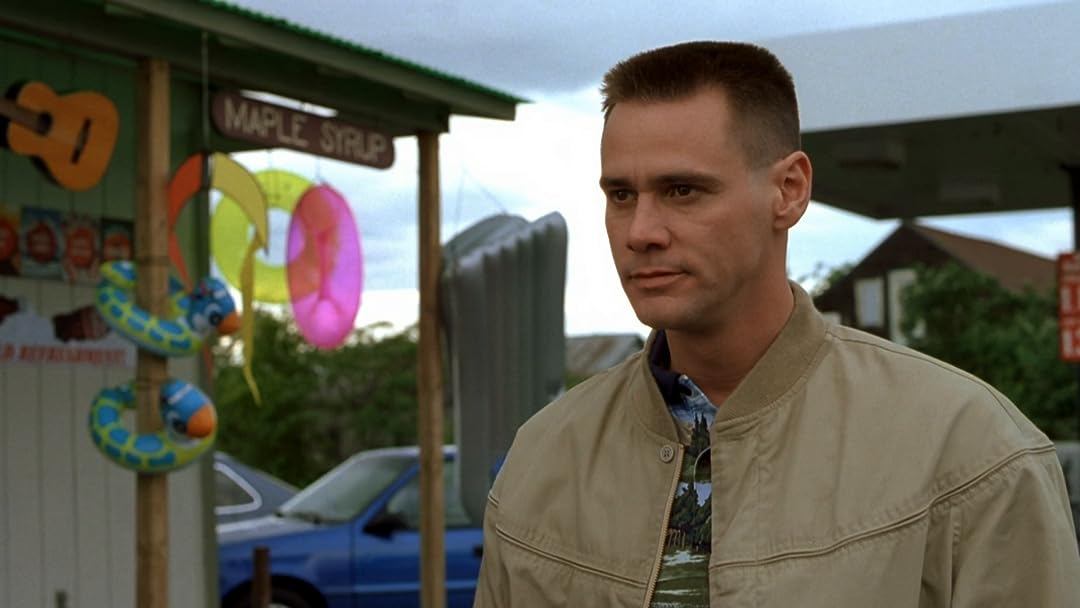 (4,954)
6.61 h 56 min2000X-RayR
Mild-mannered Charlie, a cop with multiple personality disorder, escorts Irene back to her hometown - and loses his medication on the trip. Soon, Charlie and his aggressive alter ego Hank both fall in love with the confused Irene.

Crazy SvenReviewed in the United States on November 2, 2018
5.0 out of 5 stars
Renee Zellweger & Jim Carey at Their Peak
Verified purchase
If you are looking for a light comedy with some minor romance, nominal action and offbeat slapstick, this 1990s flick is great. Renee Zellweger is looking her best in this film and Carey is at his peak in comedy. Younger audiences may not get it or think it is crude enough; whereas, church-mice, geriatrics and sensitive types will find some of the material quite crude indeed. Not for the kiddies either, just so you know. I recorded 75% of this movie off cable when it came out in the 1990s and always wondered about certain things, like how he was unmarried and had three black children. Sounds like a setup for racist jokes, but it is not, as you will find out. His kids are smarter than anyone else in the film. I'm really glad this classic has become available again on streaming. Brings back some good memories. Five stars to offset the plague of trolls who slam decent movies for their own entertainment. It is really a four-star film.
13 people found this helpful

JVReviewed in the United States on August 9, 2017
4.0 out of 5 stars
Great Movie but BEWARE!!! Listed as "Multi Format" and only received Blu Ray version.
Verified purchase
Great Movie! I've always loved this one.

Purchase wise, I'm let down because the item was listed as "Blu Ray/Multi Format, which usually means it also includes a digital version or possibly DVD version.

Upon getting the item, I see there is NO other format other than Just Blu Ray. So if you're getting this in hopes of also getting a digital version to keep in your digital collection (Like I Was), then BEWARE, This Is ONLY Blu Ray (even though its listed as Multi Format).

J. FranklinReviewed in the United States on January 10, 2021
5.0 out of 5 stars
The Best Romantic Commedy Ever Made!
Verified purchase
This is one of my favorite movies of all time, right up there with Wrongfully Accused.
Way funnier if you've never seen it, but still excellent if you have.
It's rather laid-back, giving you time to breathe, as well as develop the characters, but also hit you hard with hilarious scenes that will stay with you forever.
The story is actually decent, but where it really shines is in the tempo of the film as well as the execution of the actors' roles; the movie never gets boring, and the characters are played brilliantly!

Be warned, though, not for children. I'd say most teens these days hear and see worse in online video games (long time gamer myself), so unless you're super uptight about foul language and sex, I'm gonna say teens should be able to handle this movie (saw it when I was 15; missed a ton of adult jokes).

ArtFanReviewed in the United States on November 29, 2018
2.0 out of 5 stars
not good
Verified purchase
I love Jim Carrey, he's brilliant in a lot of movies. I like a couple other Farrely brothers movies that are quite brilliant also. But this is not one of them. I hate to say it, but there's many things wrong with this movie: the pacing is all wrong, the humor is dumb and slow (sometimes dumb humor is funny if it's paced quickly, but that's not the case here), the plot isn't particularly interesting. A lot of the humor is rehashed 10-year old guy humor.
Many times I was on the verge of quitting part way through.
But, right towards the very end, there's a long scene where Jim Carey's dual characters are fighting eachother in real time. Carey's performance here is absolutely brilliant and I'm glad I stuck it out, if for nothing else to be able to see this scene.
Also I should note that Renee Zellenger's acting is very good throughout the film. It's just a shame the rest of the movie was so poor.
4 people found this helpful

joel wingReviewed in the United States on December 2, 2020
3.0 out of 5 stars
Jim Carrey plus the Farrelly brothers equals a funny movie
Verified purchase
Me, Myself & Irene was another funny comedy when Jim Carrey was in his prime and was directed by Peter and Bobby Farrelly. That’s shown in the opening scene where he gets into a fight with his chauffeur who happens to be a small person. The chauffer then has sex with his new wife and they end up with three black kids and his wife later leaves Carrey for the driver. This is the kind of story that the Farrellys were known for.

This was actually when the brothers had started to calm down. They didn’t try to put jokes into every single scene and while there were definitely some over top moments they were in the minority. They also threw in a very dysfunctional love story between Carrey and Renee Zellweger.

Shout outs also go to Carrey’s three sons who were foul mouthed geniuses who had a lot of great scenes.
C
One person found this helpful

J. BryanReviewed in the United States on November 24, 2020
1.0 out of 5 stars
Bad Bad movie
Verified purchase
Do not waste your time I stopped watching this after a half hour just could not take the stupidity any longer.One star is to much.
5 people found this helpful

Christopher HausmannReviewed in the United States on December 22, 2018
1.0 out of 5 stars
Hilarious
Verified purchase
Had to have it in my collection! The main reason for the star subtraction is for Amazon not the movie!!!I just wish that Amazine would let me custom arrange my Video Library instead of only offering by date purchased or alphabetical order. I would prefer to arrange by genre, episode, number in franchise so that I could group my movies together instead of having a hodge podge to sort through!
3 people found this helpful

Always StrivingReviewed in the United States on March 3, 2017
5.0 out of 5 stars
Ever feel like someone else is along for the ride in your mind??? WATCH IT because it'll blow your mind! funny too!
Verified purchase
When you feel like you've been the "nice guy" for all of your life and somehow somewhere is a deep emotion within you growing making you feel like another side to you is coming to surface and you realize that just maybe someone else is on the ride with you... this brings something special throughout the movie that makes you think and the characters in the movie all come together where it just makes "sense". Actor Jim Carrey always does an outstanding job, one of my all time favorite actors! his gal pal "Irene" just makes an incredible addition. Watch it!!!

Fast delivery was pretty much "instant"!
3 people found this helpful
See all reviews
Back to top
Get to Know Us
Make Money with Us
Amazon Payment Products
Let Us Help You
EnglishChoose a language for shopping. United StatesChoose a country/region for shopping.
© 1996-2022, Amazon.com, Inc. or its affiliates