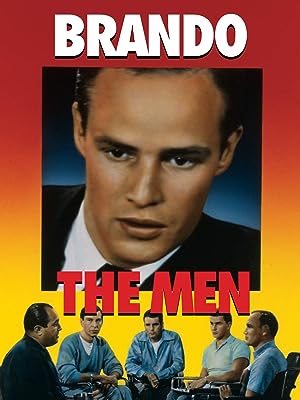 (124)
7.11 h 26 min19507+
A war veteran paralyzed in combat sinks into a solitary world of hatred and hostility. It becomes the responsibility of his fiancee to break him from the shell of despairl that he has ensconced himself in since his accident. In HD.

Chris BReviewed in the United States on July 19, 2015
5.0 out of 5 stars
The Men - 1950 - A story of War and the men who continue to fight after it is over.
Verified purchase
Here we see the young Brando before fame, fortune and Hollywood mayhem touched his life. Fresh from his Broadway success in "Streetcar" we are introduced to Marlon Brando as Ken, a wounded war veteran who has been paralyzed from the waist down by enemy gunfire. Teresa Wright plays Ellen, his fiancee and Everett Sloane, his VA Hospital physician, Dr. Brock. Jack Webb plays, Norm, an intelligent paralytic who is often cynical and Richard Erdmann who plays the witty, often comical, Leo...paralytic who sees the world through his own tinted lens. The rest of the men on the ward are played by actual U.S. Armed Forces war veterans who have been all been paralyzed in differing degrees. Ellen is trying to reach Ken...who she calls "Bud" but has not been able to see him since his return to the States. He is embittered by his experience as a man who will never walk again and who must now resign himself to life in a wheelchair. He doesn't want Ellen to have to play nurse to him and has called off their engagement. Ellen speaks with the very tough but sympathetic physician, Dr. Brock, who oversees the men on that ward...all paraplegics. With his help she finally manages to see and talk with Bud and explains her feelings for him and this new situation. Through talking with the good doctor and his cohorts on the ward, Bud finally consents to the marriage. He tries to ready himself for life outside of the hospital by exercising and doing all the proper things to strengthen his upper body as well as his alter his resentments and attitudes. They have a wonderful wedding, with Bud actually standing during the ceremony. They move into their new apartment immediately only to discover, in very short order, that neither is ready for that important step in their lives. She becomes frightened by his dependence on her and a horrible argument ensues with the result being that Bud moves back to the hospital. When his buddies at the hospital are not sympathetic, Bud has to learn to come to terms with himself and his life. The question is...can he? It doesn't get much better than a Stanley Kramer production with both the original story and screenplay written by Carl Foreman and the film directed by Fred Zinnemann!
3 people found this helpful

Patrick SelitrennyReviewed in the United States on August 31, 2007
5.0 out of 5 stars
What War is really all about...
Verified purchase
Marlon Brando (very, very young in this one) in his first major movie role really shines and shows us why cameras always loved him.

Just a glimpse of his eye, and you guess what he's thinking.
What an actor!

The movie is a very short tale of a soldier wounded in battle, who returning home discovers that he has lost a limb.

"The Men" is an ageless movie, still valid nowadays as it was back then, in the 50's.

The transfer on DVD is astonishingly excellent, as is its sound. The Black & White image is crisp and clear.

I can only remmond it to all the fans of Marlon Brando, as well as those who never saw him in one of his earliest roles.

Amazon CustomerReviewed in the United States on December 15, 2019
5.0 out of 5 stars
No sugar coating
Verified purchase
I love this movie, it's a brilliant depiction of men learning to live with a life changing permanent disability. Marlin Brando, and Jack Webb are brilliant in this movie.

One of the best movies ever made concerning a life altering disability.

voyagerReviewed in the United States on September 16, 2021
5.0 out of 5 stars
PTSD in the 1950s
Verified purchase
We know a lot more about PTSD and readjustment 70 some years since the Korean War, but this movie was a start in addressing publicly what would be a huge issue with drafted war survivors during the Vietnam War.

Cat WomanReviewed in the United States on October 22, 2019
5.0 out of 5 stars
Brando is very convincing in this performance.
Verified purchase
Brando is pretty convincing as a veteran who has become a quadriplegic. I understand that he spent time actually living in the hospital with real disabled veterans prior to the start of filming.

EnrigueReviewed in the United States on May 31, 2016
5.0 out of 5 stars
The Great One in action
Verified purchase
An early glimpse of the young great Brando. You can tell he's trying to find himself as an actor, with a bit of youthful overacting, but amazing nonetheless. Tremendous power. I think he was the most handsome actor ever to go with towering abilities. Some corny scenes and dialogue but Marlon more than makes up for it.
See all reviews
Back to top
Get to Know Us
Make Money with Us
Amazon Payment Products
Let Us Help You
EnglishChoose a language for shopping. United StatesChoose a country/region for shopping.
© 1996-2022, Amazon.com, Inc. or its affiliates