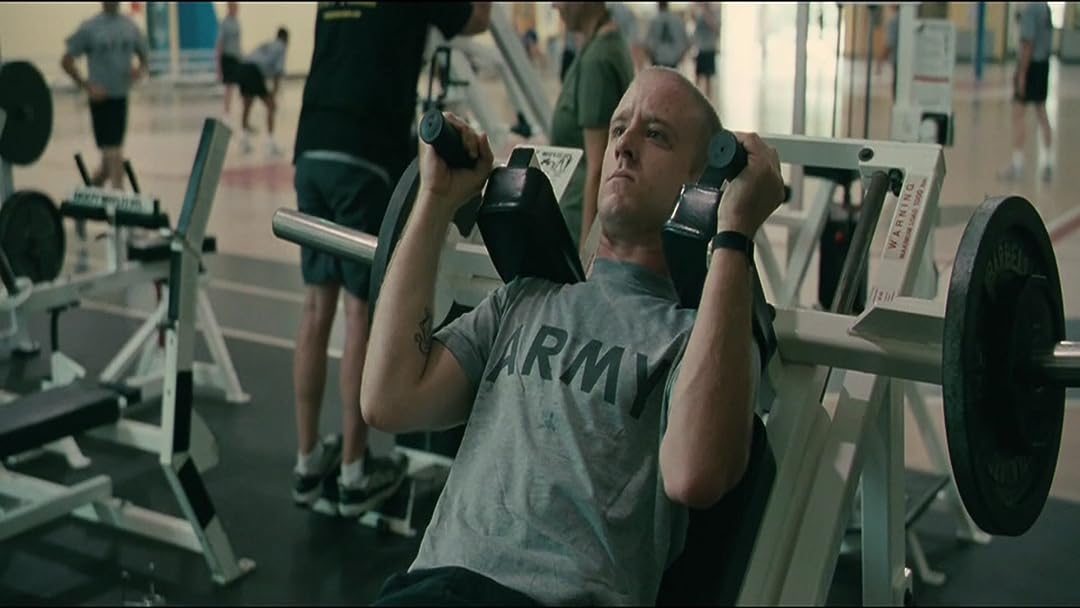 (703)
7.11 h 52 min2009X-RayR
An injured soldier is paired with a by-the-book captain to notify families of their loss -- a job that bonds them as they debate differing views on serving America. At odds at first;the two find common ground while facing life's variety of battles.

Included with Topic on Amazon for $4.99/month after trial

Watch with Topic
Start your 7-day free trial
Add to
Watchlist
By ordering or viewing, you agree to our Terms. Sold by Amazon.com Services LLC.
Write review

The Messenger is a 2009 war drama film starring Ben Foster, Woody Harrelson, Samantha Morton, Steve Buscemi, and Jena Malone. It is the directorial debut of Oren Moverman, who also wrote the screenplay with Alessandro Camon.
After being injured in Iraq, soldier Will Montgomery (Ben Foster) returns home to finish the rest of his tour of duty in the Army's Casualty Notification service. Teamed with veteran officer Tony Stone (Woody Harrelson), Will tries to come to terms with his own pain while dealing with the cold realities of his new mission. Will finds himself in the grip of an ethical problem when he becomes involved with Olivia (Samantha Morton), the widow of a fallen soldier.

As to be expected: The Messenger is initiated with a scene in which Montgomery’s role (in the Army’s C.N.O) and subsequent duties are assigned to him following what is presumed to be an ambiguously distressing loss. Taking into account the monotonous and easily scrutinized nature of their work Tony explains in detail what behavior is considered appropriate and/or conventional. Thankfully this avoids being unnecessarily elaborate while remaining reasonably bureaucratic and formal; as someone that is familiar with this specific job (even more so since I have no active or previous experience in the military) I was pleasantly surprised to note that many of Tony’s “guidelines” (Like doing their due diligence to notify individuals within 4 hours of a casualty being identified) are accurately portrayed, but many of these come across as 𝒑𝒓𝒆𝒇𝒆𝒓𝒆𝒏𝒄𝒆𝒔 as opposed to obligations or part of some larger code of conduct. This isn’t exactly a terrible thing - because it sets the scene for conflict between Tony and Will fairly quickly without exaggeration - but it has the potential to confuse audience members that feel readily and understandably detached from the subject matter or larger context.

Given what can be expected from its cast (and the fact that Harrelson for nominated for an Academy award for Best Supporting Actor in this feature) ‘The Messenger’ does seem a bit underwhelming in regards to its enclosed performances. On one hand they are suitably grounded (as they should be, given the seriousness of the material), but they appear constrained by an insistently reserved script. There are points of convergence that beautifully illustrate a complex panorama of grief (With Buscemi’s brief interludes compounding the way in which grief 𝒄𝒉𝒂𝒏𝒈𝒆𝒔), and I only wish as a viewer that these moments were given a fair (and perhaps more intense) chance to thrive.

While ‘The Messenger’ is scores away from being aimless Will’s “ethical dilemma” that masquerades as a romantic interest continuously threatens to be. Unlikely scenarios aside - I would go as far as to call it recklessly forced within the confines of an obviously ambitious screenplay. This relationship acts as a leash in that it keeps specific characters tethered to an unwavering conflict, but in other ways it resembles a condiment that nobody asked for. Does it taste good? Sure. Is it supplementary? Not really.

All things considered: ‘The Messenger’ remains palatable though an assortment of interactions made to deeply reflex ton trauma, loss, and their subsequent effects; as other shave pointed out before me - Moverman’s messages as they relate to the value of trust and the burden of vulnerability come through clearly and make many of his narrative drawbacks easily disregarded. It’s of no surprise to me (as I have come to find out) that Moverman has prior experience serving for the Israel Defense Forces and it is likely that much of what is shown in this film is loosely biographical if not anything else.

Tackling a different battleground of sorts - the one most soldiers are required to leave behind - ‘The Messenger’ is a palmary achievement designed to honor a group of people previously forgotten about or unaccounted for. Infused with timely rhetoric regarding the cost of war (albeit simplified): Moverman challenges audience members without brutality approaching his point.

I’d be lying if I said that I enjoyed ‘The Messenger’ myself, but I fully appreciate its originality and aspirations.
Hopefully that’s the next best thing.

Ron BlachmanReviewed in the United States on March 29, 2019
5.0 out of 5 stars
When warriors start to heal on the inside they become people again, wish they all did
Verified purchase
Ben foster has become an actor of enormous range and sensitivity, Harrelson is the perfect foil and Samantha Morton is always nuanced and appealing. This is a movie about the interior, emotion parts of going on past great loss but it isn't the slightest bit weepy or maudlin. The script and pace may not be quite "great movie" but the performances and ideas are. Worth watching with someone else and discussing.
8 people found this helpful

RONCONReviewed in the United States on March 19, 2021
5.0 out of 5 stars
Very good movie view from a Vet
Verified purchase
Being a Navy Vet , I truly feel sorry for ARMY soldiers as I'm sure this is authentic , I have many army friends and a brother who was 7th Air cavalry lost in Nam his/their true story is immortalized in the movie WE WERE SOLDIERS actually currently available free on prime. The Deferens of our two branches is , the navy would never send personnel without extensive training and including intense phycological support and this would more than likely be done by chaplain's . one thing I can attest to and I'm positive my vet brothers would agree to , is the odd thing about being put together with somebody you initially thought was the biggest jerk you ever met and eventually strangely becoming friends and more often like brothers

EVanReviewed in the United States on September 30, 2019
1.0 out of 5 stars
Great Actors, Storyline had potential, fell apart, dragged - too bad really
Verified purchase
No one can argue the supreme acting abilities of this stellar cast of actors. Harrelson, Foster, Buscemi, Morton and Malone - I mean GOOD GRIEF, how could you go wrong? Well, speaking of "Grief" this storyline had awesome potential but it did go wrong. The scenes between Harrelson and Foster were the most interesting but I'm guessing not supported with real substantive writing. You never really know or feel the depth of whatever is haunting Foster. The interactions between Morton and Foster.... they dragged on FOREVER. Overall, we felt the whole thing fizzled out in a big way and wasn't worth the time. Again, too bad. Had potential, story was in the wrong hands of the writers adn directors.

FrancoReviewed in the United States on August 30, 2019
2.0 out of 5 stars
Empty
Verified purchase
I really like to watch Woody Harrelson and Ben Foster movies but this one left me expecting more and I kept waiting for that moment when a movie starts to come together and makes sense but that moment never came. I reckon they tried to show the disparity between the civilian and military cultures and how each dealt with loss but it just never happened for me and just left an empty void. "Taking Chance" with Kevin Bacon was a far superior movie IMHO.
2 people found this helpful

RKHarm24Reviewed in the United States on June 16, 2019
4.0 out of 5 stars
While this movie is about a mission that must be accomplished.
Verified purchase
This movie covers the dark side of military, the side nobody wants to think about. The people you encounter are not happy to see you or hear your message. It has slow and dry moments you may not understand, unless you have been in the military and experienced it. Making notifications, is not an award winning position. Thank you for this movie though.
5 people found this helpful

Captain AwesomeReviewed in the United States on March 6, 2011
5.0 out of 5 stars
Great movie
Verified purchase
Great movie. The performances were amazing & so believable. We probably all know someone who went, or is "over there" (as they refer to it in the movie) and Ben Foster's charecter is so spot on. Woody Harleson's charecter comes accross at first as a hardend war hero, and as the movie progresses we see he is really just a broken man trying to make the best of it all. His one-liners are priceless. (Mamma said they'll be days like this...) I was afraid that this movie might just make me burst into tears, but I didnt cry at all. And thats saying something. This movie is not meant to be depressing. I actually think it's the opposite. Every civillian should be required by law to see this movie. The story told in this movie made me think of how, in the past, WWII and Vietnam, it wasnt just our troops at war, America as a whole was at war. "Support the troops" was more than just a slogan. It seems like the general public view the war as a 30 second newsclip on CNN or FOX news. We forget that those boys and girls fighting over there were our classmates, played on our soccer teams, went to prom & now they are far away seeing real things that we choose to avoid talking about. Most of us are more concerned about the newest gadget or who the bachalor gave the rose to. This movie addresses that apathy, I think, and also addresses the reality of what a returned soldier goes thru. The most heart wrenching parts of the movie are when the Messengers must deliver the news to next of kin whose loved one was just killed.
Great movie, definatly Oscar worthy & every American should see. I also think it should be shown in public high schools (skipping over a few naked scenes of course)
10 people found this helpful

LDReviewed in the United States on September 24, 2017
5.0 out of 5 stars
This is an excellent movie on many levels
Verified purchase
This is an excellent movie on many levels. Acting/subject/writing. It is about two soldiers who are damaged in different ways and coming to grips with how life is now. One is a returning soldier with wounds and the other who never had to go overseas but has to notify families of deceased sons/daughters and the wounded soldier is assigned to duty with him.......
One person found this helpful
See all reviews
Back to top
Get to Know Us
Make Money with Us
Amazon Payment Products
Let Us Help You
EnglishChoose a language for shopping. United StatesChoose a country/region for shopping.
© 1996-2022, Amazon.com, Inc. or its affiliates