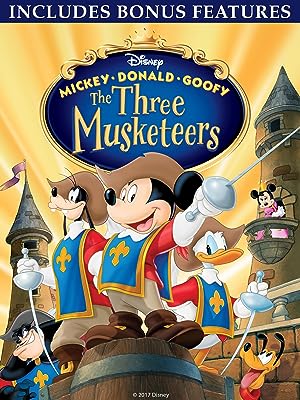 Raisuli the MagnificentReviewed in the United States on February 22, 2014
4.0 out of 5 stars
It's alright.
Verified purchase
I saw the reviews of this with Ebert and the guy who replaced Gene Siskel. They gave it a thumbs up, and during one pay period, when I had some excess cash to spend, I splurged on a used copy.

I liked what I saw, but it felt a little forced in the humor department. BACKGROUND; Disney and Warner Brothers were bitter rivals in the 30s, 40s, and up through the 60s. It wasn't until some bean conter at WB realized that WB could save money by re-issuing and re-editing their current crop of animation that WB's animation studios fell into dissuse as the division was all but shut down. This left Disney and MGM, and MGM was investing more and more in musical spectacles. This left Disney as the animation king (well, at least here in the US).

As such Disney took some story styling cues from Warner Brothers and integrated them into their short films and features. It worked. The only problem is that Disney is not Warner. Disney has matured and polished its animation storytelling styles since that time, but when this film came out there was still a lot of rough edges that needed to be smoothed out.

Even so, the humor does deliver for those who like zingers in their toons. Mickey, Donald and Goofy go through a G-rated retelling of Dumas' tale, and save the Queen and France at the end of the adventure.

I liked it. It was okay. But it wasn't sterling, and, like I say, Disney was just getting its sea legs under it as they took a more classic Waner Brother's approach to witty cartoon story telling.

Have a gander and enjoy.

Rosemary MartinReviewed in the United States on January 9, 2020
5.0 out of 5 stars
Had to share it with my siblings!
Verified purchase
When we were little, Mom and Dad got this for us on VHS. My brother, sister and I literally watched it until it fell apart! Flash forward years later and we have new siblings. Of course, I had to share the joy with them! Unlike many movies you watch when you are young and then watch again years later, this one was BETTER than I remembered it! It is a shorter movie but not annoying when watched on repeat, and riddled with the cliche's children (and adults) adore. Great soundtrack especially the "Bad Guy Song." It is very funny. The plot could use some more fleshing out, but that would require time not available when this was produced (for various reasons).

Brenda O'BorskyReviewed in the United States on August 1, 2020
1.0 out of 5 stars
I do not recall ordering this
Verified purchase
I noticed a charge out of my bank account for this and I have no idea why. Apparently it is digital so it's not even anything I can give away. Even though it was only about $2.99, I am not happy to pay for something that I did not order. Trying to research it on Amazon was not even worth the time it was taking, so I gave up. I'm just hoping not to find anymore mystery charges in the future.

Alejandro MesaReviewed in the United States on September 19, 2021
5.0 out of 5 stars
the dvd works good and the movie is good with heart i recommend it too disney fans
Verified purchase
i like the disney characters it has mickey. donald and goofy are some of the best in the world i love too see them and this movie i like too super thank the seller and amazon for the good work they do for us all thank you

Amazon CustomerReviewed in the United States on March 5, 2021
1.0 out of 5 stars
Never purchase from this company. Such a rip off!
Verified purchase
So disappointed in the purchase. My grandson love this dvd but his is scratched and skips. So I decided to replace his. Little did I know I was getting a used dvd. Which isn’t the worse part. This one is scratched up too!

Will RiddleReviewed in the United States on December 16, 2015
5.0 out of 5 stars
Cute throwback
Verified purchase
My kids loved this movie (13-8yrs). I thought they wouldn't because it's kind of old-fashioned and not as hip as the new Disney/Pixar, but as long as your kids have open minds towards slightly older cartoons, they'll probably like it too. Has some really funny humor in there which reminded me of why old people still like Mickey Mouse, etc. Story is cute too, and about the right length--70 mins.
One person found this helpful

SoccerMomReviewed in the United States on November 15, 2016
5.0 out of 5 stars
A wonderful (and funny) Disney story!
Verified purchase
As usual, A great Disney film. I was surprised by the quality. Our kids love the story, especially that the princess falls in love with a "regular" guy! There's a few great funny bits in there that leave the kids cracking up. You can't mention a chicken in our house without someone busting into a Donald Duck voice and quoting lines from the movie and then they all have a giggle fit. (Which is a few times a day, as we have a bunch of chickens) That's the mark of a good movie in our house!
2 people found this helpful

Th3G3ntl3manReviewed in the United States on January 29, 2019
5.0 out of 5 stars
A Childhood Favorite
Verified purchase
Man I remember watching this movie nonstop as a child! It's packed full with laughs, song, and more laughs! Love the puns too and still intrigues me to this day:D Not that I bought it just for me or anything though.. I mean my son surely loves it at least half as much as I! xDD
See all reviews
Back to top
Get to Know Us
Make Money with Us
Amazon Payment Products
Let Us Help You
EnglishChoose a language for shopping. United StatesChoose a country/region for shopping.
© 1996-2022, Amazon.com, Inc. or its affiliates